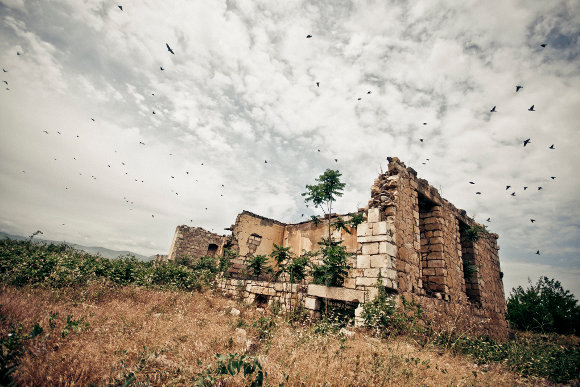 The conflict of Nagorno-Karabakh between Armenia and Azerbaijan, is one of the bloodiest and most intractable to emerge from the breakup of the Soviet Union, making peacebuilding even more imperative.

The conflict over Nagorno-Karabakh is the greatest obstacle to security and stability in the South Caucasus and the involved parties did not resolve it. Bilateral conflict relations have not stabilised the region, as there are many third party interests at play, often overshadowing national interests. For instance, Nagorno-Karabakh is influential in relations between Armenia and Turkey, while Turkey shares a closer relationship with Azerbaijan.

Nagorno-Karabakh is within the international borders of Azerbaijan over a total area of 4,800 square kilometres. For countless ethnic groups, the territory has been a transit and settlement zone for thousands of years, resulting in innumerable territorial conflicts, campaigns of conquest and ethnic dislocations. Both the Azeris and Armenians claim ownership of the Nagorno-Karabakh region. Various immigrations and mutual attacks have often resulted in negotiations reaching a deadlock. Consequently, both sides claim legitimacy due to fear that they would be an ethnic minority within the region.

Between 1992 and 1994 Armenia and Azerbaijan went to war over Nagorno-Karabakh. The dispute has been characterized by violence and is based on frozen interethnic issues in the Caucasus region. Nagorno-Karabakh conflict still potentially dangerous and negotiations continue, but a solution has not been found yet. Mutual dehumanisation of the enemy makes confidence-building and improving relations difficult. Enhancing cooperative agreements and encouraging attempts of second track diplomacy can ameliorate the lack of economic, cultural and social contact between the two communities.

The Caucasus Research Resource Centre identified the current views on a resolution between Armenia and Azerbaijan over Nagorno-Karabakh. They found that 23% of the Armenian people and 10% of the Azeri think that the issue will never be resolved. The study indicates that the prospects of conflict are becoming an integral part of their country and have increased since the ceasefire agreement in May 1994.

The main problem arises from political and historical assertions that have emphasised ethnicity and the shifting sovereignty of Karabakh. According to Armenian perception of history, the Albanians were converted to Christianity and “Armenianised” at a very early stage. Azerbaijan argues that the region is Islamised and originates from a Turkish population from Azerbaijan. Within the Nagorno-Karabakh region, the population is predominately Armenian, and is governed by the Nagorno-Karabakh Republic, an independent but not internationally recognised state.

Economic and cultural perspectives deepen the conflict by entrenching hostile beliefs about the other side. Armenia is one of the most isolated countries in the region, making it considerably weaker and poorer than its neighbours. The area’s strategic importance is dependent on the extraction and export of Caspian oil, often exacerbating regional polarisation.

For relations between Azerbaijan and Armenia, the Analytical Centre on Globalization Regional Cooperation (ACGRC) plays a key role, and therefore Programme Manager Hasmik Grigoryan responded to my questions explaining the region, issues, and recommendations. She helped to identify the situation and discussed their activities as peacebuilders.

What is the main primary focus of your institution?

Established in 2002, ACGRC works as both a think-tank and an advocacy group, promoting democratic values, strengthening civil society and the rule of law in Armenia, development of free market economy, regional integration and peaceful resolution of regional conflicts. ACGRC supports public sector reforms and development of good practices in local governance, disseminates knowledge on legal issues, produces expert assessments and analysis of conflict transformation and regional cooperation issues. It also supports initiatives that aim towards forming an atmosphere of trust and stable peace in the South Caucasus.

Could you please give some details regarding your projects? What areas do you focus on generally?

This interview aims to illustrate efforts on reconciliation and peace between Azerbaijan and Armenia in relation to the Nagorno-Karabakh question. Therefore, can you explain what kind of projects and organisations are included?

Did you notice any kind of change in terms of peace and reconciliation between both communities after they have been involved in the outlined projects?

By engaging in the projects a large number of people, from both sides, developed better connections with each other and networks of peace were enlarged. Participants made joint statements and spoke on TV or wrote in media calling to solve conflict through peace and compromise. Also the participants of the projects try to show their opinion and common results of the meetings to the Armenian and Azerbaijani governments and international actors.

The crucial part relies on ACGRC highlighting the definition and reason for the conflict to both local and international peacebuilding parties. It is important that tolerance and interactions foster peace, helping to create possible awareness and changing perceptions. Conflict between both countries is defined as lack of trust and tolerance, lack of connections and interaction, tensions on the border. No people-to-people contacts. No will to understand each other and go for compromises. Though it is a frozen conflict but with civil and military victims and injured people.

The conflict between Armenia and Azerbaijan is still significant as it influences neighbouring countries and security in the region. It seems that dialogue between conflicting communities can overcome misperceptions and if people can interact with each other, it can be the beginning of peaceful approach. Civil society is much more beneficial when national interests are looking for humanity and safety.

Tugce Ercetin is working towards a PhD in political science, and has both a Bachelor’s and Masters degree in international relations.