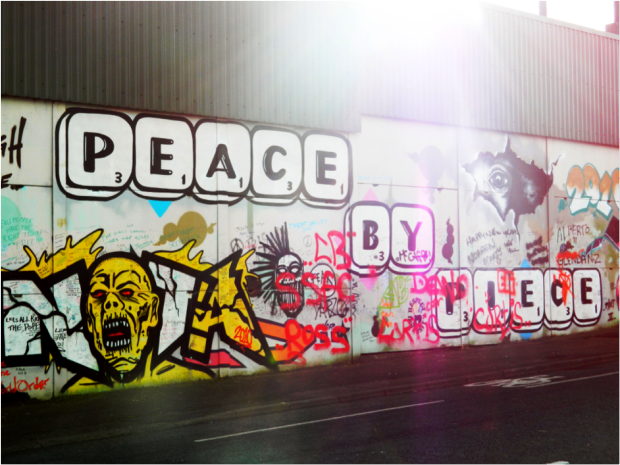 Moving beyond the paralysing difference of opinion about whether the ‘Troubles’ in Northern Ireland constituted an armed conflict, women peacebuilders have produced a strategic guide which places international women, peace and security goals in a domestic framework for action.

Northern Ireland is a bit of a conundrum. Has it been the longest running conflict in Europe? Was it simply a political conflict? Was it an armed conflict?  With shootings, bombings, multiple paramilitaries and an army on the streets, and thousands of civilian casualties it seems a “no brainer”. Yet at the 2013 UN CEDAW Examination of the UK the Government declared ‘the Northern Ireland situation did not constitute an armed conflict as defined under international law.’ We learned at the same time that the Northern Ireland Executive has a split view, with the First Minister agreeing with the Government and the deputy First Minister disagreeing.

Of course, this does not stop Northern Ireland from receiving its fourth tranche of European peace funds, nor politicians, former civil servants, ex-combatants and civil society leaders travelling the world sharing the lessons from the Northern Ireland peace process in other regions where it would be impossible to deny there is armed conflict.

The UK National Action Plan on Women, Peace and Security does not include Northern Ireland, and no requirement trickles down to the Northern Ireland Executive to implement, co-ordinate and report on matters concerning women, peace and security. On the other hand Ireland’s 1325 National Action Plan rightly includes both outward and inward looking foci; Northern Ireland is included, but inter-jurisdictional sensitivity makes acting decisively difficult in the absent of symmetry. Yet the Belfast/Good Friday Agreement should provide the framework for North-South collaboration and tackling inter-jurisdictional challenges.

The few specific commitments to women in the Agreement are more likely to be realised  by action outside government. Recently, the women’s leadership network WINET has prioritised getting more women onto public bodies, which is also a matter of concern for the Commissioner for Public Appointments in Northern Ireland; and the Northern Ireland Assembly is examining women’s representation in the political sphere. It is chastening to know that the significant increase in the number of women police officers has been due largely to the innovative, and some might say controversial, provisions in the Police (Northern Ireland) Act 2000.  It proves that decisive government leadership can make a dramatic difference.

Strategic Guide and Toolkit on women, peace and security

Summer 2014 brought the means for the Northern Ireland Executive and public bodies to move beyond the paralysing difference of opinion on conflict/no conflict, and focus instead on the practicalities of delivering peace and security benefits to women in Northern Ireland in line with international principles. TheStrategic Guide and Toolkit on Women, Peace and Security: Women’s Rights and Gender Equality for pubic policy makers placed the international women, peace and security goals in a domestic framework for action.

The Guide, although an independent project, was developed in consultation with the public sector in Northern Ireland and Ireland. A Northern Ireland Executive Junior Minister spoke at the launch attended by public officials and civil society. The approach taken in the Guide to ‘domesticating’ the international women, peace and security principles is three-fold.

The first approach is awareness-raising. The Guide briefly explains the concept of women, peace and security and its background, the Convention on the Elimination of all forms of Discrimination Against Women (CEDAW), EU and national implementation. It links the principles to key domestic gender and equality policies as well as mapping Northern Ireland themes against the UN themes. A section demonstrates the business benefits gained by maximising the effectiveness of decision-making and business performance through the full use of the talent pool: studies have shown a relationship between women’s representation on boards and improved performance in a range of areas including financial, environmental, social and governance.

During a public sector consultation in advance of producing the Guide the authors had found insufficient knowledge on the meaning of terms, with ‘gender perspective’ a common example. So the second approach is knowledge transfer. Key concepts are explained simply: gender, gender equality, gender analysis, gender perspective, gender mainstreaming and gender budgeting. Each is accompanied by a set of tools to apply: for example, the key steps for gender analysis, a framework for understanding what a ‘gender perspective’ means and does not mean, and gender budgeting tools.

The third approach outlines a strategic framework of outcomes and recommendations to assist political leaders and policy-makers in delivering to women, and communities generally, on the peace commitments and benefits of the Belfast/Good Friday Agreement, its outworkings and post-conflict developments. While linked to the UN framework, the outcomes and recommendations are domestic in focus and adaptable to the complete range of public actors.

The Prevention, Framework of Security and Rights goal is the prevention of conflict through gender sensitive strategies and support for women’s and girls’ human rights. This expects clear and visible leadership on women and their essential contribution to peace and security, calling for a statement of commitment from the First and deputy First Minister. In particular it speaks to the real fear that women expressed to the Women and Peacebuilding Project where they do not feel safe in their communities or able to have their voices heard. In the absence of a dedicated 1325 National Action Plan for Northern Ireland, the current re-writing of the Northern Ireland Executive’s Gender Equality Strategy must address the five themes of prevention, participation, protection, reconstruction and legacy, and advocacy in support of women, peace and security.

The Participation and Representation goal is for women to participate equally with men and gender equality to be promoted in decision-making processes. This responds to the lack of women’s visibility expressed to the Project and the silencing of women from criticizing politics lest they destabilize the political institutions. The outcome seeks women fully and equally participating in politics, decision-making, peace-building, public sector reform, new local government arrangements including community planning, and implementation of locally negotiated cross community/peace agreements. Establishing the Civic Forum in Northern Ireland – halted in its second year – and the North South Consultative Forum – promised in the Agreement but never activated – both with gender balanced representation could be an easily realisable concrete outcome.

The Protection, Realisation of Rights, Economic and Social Justice goal is that women’s and girls’ safety, health and economic well-being are protected. Again this gives voice to the deep wish to feel safe in communities and from domestic and sexual violence and abuse, and that a duty of care is extended to women who have fled to Ireland and Northern Ireland from conflict affected regions. It identifies the imperative of supporting women’s networks to build confidence, resilience and solidarity to counteract the ongoing undercurrents of paramilitary violence, enable women to speak out and help establish an environment free from paramilitary influence.

The Promotion and Advocacy goal is that women’s rights and inclusion is championed and gender sensitive policy-making is routinely done. Outcomes include sharing lessons on women’s empowerment and gender equality across government and agencies in Northern Ireland and Ireland; and incorporating international obligations and a focus on women, peace and security into the Northern Ireland Programme for Government and inter-governmental arrangements between the North and South of Ireland. A trilateral approach between the British and Irish Governments and the Northern Ireland Executive is called for to build cooperation on implementing the spirit and principles of UNSCR 1325 and addressing the impact of the conflict on women in both jurisdictions.

The Guide includes a number of illustrative domestic indicators for each goal, based on the UN indicators, and examples of good practice from Northern Ireland government departments and public bodies. A recommendation suggests establishing a Gender Equality Monitoring Committee with an independent chair and comprising 50/50 government and non-government with a remit that includes monitoring progress on women, peace and security.

While significant progress towards peace has been made, there are constant peacebuilding challenges: leading and governing, political and community tensions, reaching a shared vision, matters of legacy and recovery, reconstruction and development made harder in a time of austerity. The peace is more unsteady than it needs to be and, moreover, women cannot see themselves reflected in the progress that has been made. A transformation is required.

Morally, the marginalisation, frustration and anger vocalised by so many women across the community some sixteen years after the Agreement cannot be ignored. Indeed the path to transformation is participation, in particular women’s participation. As studies show, the full inclusion of women at all levels will release new vision and energy and improve performance.

The Guide was informed by the views of over 800 women in the Women and Peacebuilding Project and a range of officials and public bodies in Northern Ireland and Ireland. It provides a pathway to the realisation of peace and security benefits for women, in fulfilment of the promise of the Belfast/Good Friday Agreement and international principles and obligations.

Bronagh Hinds is a consultant with interests in equality, democracy and governance and a Senior Associate with DemocraShe, an organisation she co-founded in the wake of the Belfast/Good Friday Agreement to advance women’s leadership in politics, civic society and peace-building at home and abroad. She is the co-author of the Strategic Guide and Toolkit on Women, Peace and Security: Women’s Rights and Gender Equality.

This article was originally published on OpenDemocracy and is available by clicking here.