TransConflict is pleased to present an extract from a new book, ‘The Vatican’s Challenges in the Balkans: Bolstering the Catholic Church in 2015 and Beyond‘, by Matteo Albertini and Chris Deliso, published by Balkanalysis.com.

By Matteo Albertini and Chris Deliso

While the 2013 election of the charismatic, reformist Pope Francis has renewed world fascination with the Vatican, the Holy See’s vast contemporary role in the Balkans has been mostly ignored- until now.

Combining extensive on-the-ground research, top-secret intelligence and interviews with media reports and official Church data, The Vatican’s Challenges in the Balkans is the first comprehensive analysis of the Holy See’s current relationships and activities in Balkan countries at the levels of state, church and outreach to local populations.

Although previous books have concentrated on the Vatican’s Balkan role in the 1990s, WWII or earlier conflict periods, no study until now has documented the current Balkan policies and activities of the Catholic Church’s senior leadership. 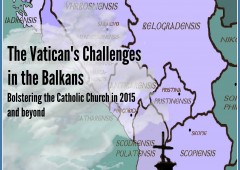 Book excerpt from section 1.3. (‘Common Characteristics of Vatican Diplomatic Appointments in the Balkans’):

The Vatican’s ‘two for one’ model of country oversight in the Balkans, and the qualities of the specific diplomats it has traditionally sent there, indicate that the region has been identified as one sufficiently important as to require a limited group of highly experienced diplomats, each of whom has had prior experience in developing countries with equal or greater problems than are encountered in the Balkans. As we shall see, these men have also oftentimes previously served in other Balkan countries, lending them great familiarity with the local dynamics and power players present.

Papal nuncios in the region thus tend to be experienced diplomats, and enjoy the trust of that pontiff who appointed them; generally, to be in this position in the first place means that they would have already achieved prominence over a long period of time within the Vatican, often through previous diplomatic missions elsewhere, or through the discreet handling of sensitive matters.

A statistical analysis (presented in the first appendix below) indicates that the average Balkan nuncio is 62 years old at the start of his first regional posting, has served in three African or Latin American countries in the past, and will serve in an average of two Balkan countries in his career. The last figure might of course be even higher, as many of the nuncios identified in this analysis are still active and could thus potentially be reassigned to further Balkan missions in the future.

Although the Balkans is certainly not the Vatican’s top world priority, its mix of ethnicities and sects, and its relatively underdeveloped status, make it one of the Vatican’s priority areas within Europe. Unlike much of ‘Post-Christian’ Europe, significant religiosity can still be found in Balkan countries, making this one of the only possible growth areas for the Catholic Church in Europe today. Thus, the men appointed to represent the Holy See in this region tend to be ‘cut from a different cloth’ than may the case with other nuncios elsewhere on the Continent.

The Vatican’s diplomatic selection process in the region thus has something to do with the way in which the Holy See perceives the Balkans, a perception that is itself somehow still colored by how the Vatican saw the region in the initial post-Communism years. This can be understood in two ways: first, the region is perceived as part of ‘post-Communist Eastern Europe,’ a larger area requiring pastoral attention to rejuvenate the flock; secondly, the precise fact that it does not contain large and ‘prestigious’ countries means that it is less likely to suffer from the kind of ‘political’ appointments that may characterize diplomats to more prominent countries. A Balkan posting is neither a ‘luxury posting’ nor a ‘hardship mission;’ it is something different. Indeed, the fact that regional postings tend to be filled by senior career diplomats only enhances the Vatican’s operational effectiveness on the ground.

Finally, it might be said that the Balkans – especially its western, Adriatic shores – represents the ‘near abroad’ for both the Vatican and the Italian state, the latter of which is long accustomed to tackling organized crime, narcotics trafficking, illegal immigration and terrorism supporters associated with the region. And it can even be said that contemporary Italy has continued its historic close interest in local politics. During the Cold War, in fact, Italy was the NATO member primarily tasked with keeping an eye on the region, which developed a certain amount of ‘institutional memory’ that survives to the present day.

Journalists or academics wishing to review the book or use it in their research can contact Balkanalysis by writing to contact@balkanalysis.com.