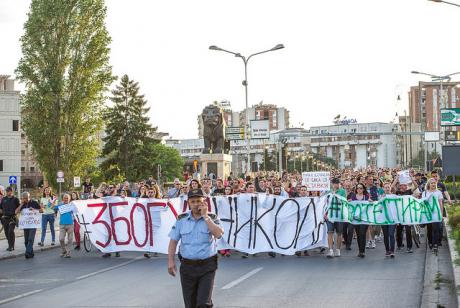 Like putting a plaster on a wound that has not been cleaned, an EU-mediated deal to stabilise (but not necessarily democratise) the country is being negotiated behind closed doors.

Unlike the old authoritarian regimes, these rulers do not need to resort to violence to hold on to power. Rather, they remain in power through the control of information and the manipulation of beliefs, as well as developing neo-patrimonial and neo-prebendal economic systems.

A recent study on such regimes identifies four resilience tactics that are usually employed: co-optation, censorship, propaganda, and repression. Importantly, it shows that the regime only uses repression, or violence against the public when mass beliefs cannot be manipulated through the first three tactics. An indication of such a move was witnessed recently in Macedonia.

A mass wiretapping scandal has been unfolding in the country since early February, when the biggest opposition party started broadcasting tapes that point to complete state capture. On May 5, a new set of wiretapped materials provided evidence about a case of fatal police brutality that sparked a mass anti-police brutality protests in 2011.

As the anti-police brutality movement was reignited in response to the revelations, thousands gathered to demand resignations and responsibility in front of the Government building. The peaceful protest eventually turned violent, with a number of protesters detained and injured. In addition to using brute force against the protesters, the police also raided a public library, harassing students.

The repressive police response backfired, with the protests growing every consecutive day, and spreading throughout the country and the diaspora. They were only interrupted for a few days during the Kumanovo security crisis. This, however, allowed the protesters to crystallise their demands and to unite their actions around a new informal social movement, known as #Protestiram (#IProtest). The protests continued every day until May 17.

The display of citizen dissatisfaction culminated on May 17, when tens of thousands Macedonian citizens demanded resignations from Gruevski and his closest team. Following the protest – organised by the coalition called ‘Citizens for Macedonia’ – which was coordinated by the biggest opposition party and a number of NGOs, the coalition set up a protest camp in front of the Government headquarters.

On May 18, on the other hand, a large pro-government rally was organised in Skopje, resulting in a government supporters’ camp set up in front of the Parliament building. In reality, both protests were a way for the biggest party leaders, the Prime Minister Gruevski and the opposition leader Zaev, to legitimise themselves and their demands prior to the forthcoming negotiation process.

The negotiations, unfolding mainly in Skopje and Brussels, involve the leaders of the four biggest political parties (two seen as predominantly ethnically Macedonian and the other two as predominantly ethnically Albanian) and is mediated by EU representatives. With the negotiations completely hidden from the public eye and with very little information available to the citizens, the political has been hollowed out of the public domain. Consequently, the protest movement appears to have lost its raison d’être and the camps are on the verge of becoming mere theatrics.

What seems clear is that the negotiations will result in a lose/lose outcome both for the government and the opposition. The opposition has raised the expectations, whereby any outcome that allows Gruevski and his team to keep their offices during the transitional government will be considered unacceptable by those critical of the government. The part of the public that still supports Gruevski, however, would see his leaving as a removing of a legitimately elected country leader.

The EU’s involvement in the process is very important. Beyond any delusional perception of the Union as the Good Samaritan, in this case, it is also EU’s foreign policy actorness that is at stake. The Balkans has always been not only the birthplace of the EU’s foreign policy, but also the testing ground for all its instruments in this domain. Many remember the infamous 1991 claim by Jacques Poos, then Luxembourg’s Foreign Minister speaking on behalf of the European Community, that “the hour of Europe has dawned”, shortly before the Yugoslav wars fiasco.

The EU’s foreign policy has come a long way since then, among other things, by contributing to the efforts which prevented an escalation of the 2001 ethnic conflict in Macedonia. In the following years, the EU was a key actor in the process of Macedonian state-building. That said, getting their ‘success story’ in the Balkans back on track to EU membership is paramount for EU’s actorness in foreign matters not being destroyed to ashes. At the same time, wary of opening a can of worms in an unstable neighbourhood and setting precedents, the EU appears mindful of the extent to which it intervenes.

All of this leaves the Union once again giving priority to stabilisation over democratisation, as if the two were not intimately interrelated and could successfully take place in succession. This is an approach of which one can find countless examples in the Balkans. In Macedonia in particular the international community has long been perceiving Gruevski as the ‘stabiliser’, thus turning a blind eye to the democratic backsliding that the country has been experiencing in the last several years. To that end, there are at least three problems with the way the negotiations are carried out at present.

First, there is hardly any transparency in the process. The brief non-informative, often contradictory statements of those involved, including EU representatives, are the only pieces of information the public has. In a society that has been living in a nearly total media blackout for years, the lack of information makes the negotiations and relatedly, the fate of the country, even more distant from the citizens. Needless to say, it also contributes to the feeling of uncertainty.

Second, there appears to be an assumption that the current authoritarian tendencies, even if never called so explicitly by international representatives, are in a direct opposition to democracy. As if the two constituted a dichotomy and when the current illiberal system collapses, democracy would somehow naturally arise. Like putting a plaster on a wound that has not been cleaned, a deal is being negotiated without much guarantee of its implementation. The failure of the EU-mediated March 2014 agreement, for instance, to bring about any substantial changes or even fully resolve the crisis ought to be a stark reminder of the limits of this approach.

Final and foremost is the problem of representation. The negotiation process postulates the current political crisis as a conflict between political parties rather than a crisis of legitimacy of the institutions. What Macedonia is experiencing is a conflict between the citizenry and the power-holders.

There are three important things that the leaders of the political parties perhaps conveniently forget, but the EU representatives must not.

First is the fact that the May outburst of public dissatisfaction did not happen in a vacuum and it was not solely a result of the leaked materials. In actuality, the most recent protests come at the heels of months of large protests, starting with the protests of the students at the end of 2014, the contract workers, the media employees, the protests against the Minister of Health following the tragic death of a young girl, the high school students and their parents, etc.

The second important fact is that the average election turnout in Macedonia is 57.49%, with a large portion of the electorate deciding not to vote, thereby not being represented by any political party, much less the four biggest.

Both of these relate to the third important reality and that is the existence of the genuine grassroots, autonomous, self-organised local agency that the #Protestiram movement is.

Up until May 17, the daily protests of #Protestiram had managed to engage a part of the population that is dissatisfied not just with the current government, but with the way politics is done in the country altogether. Believing that the citizens ought to be able to act politically even beyond the political parties, the protesters have demanded accountability to the citizens, not solely to the party members.

Through marches and plenums, this local agency, even if unsustainable and with uncertain future, has managed to give a platform for the unrepresented citizens to voice their opinions. Thus, the capacity thereof is something that must be recognised and utilised in the democratisation of the country.

Overall, this is a rare occasion for a ‘restart’ of the system. It is an occasion to rewrite the social contract between the institutions, the government and the citizens. It is an occasion that only occurs after tectonic ruptures, such as wars or massive crises.

In Macedonia, this is an opportunity to finally set the foundations of a democratic society and accountable institutions, which will inevitably be a lengthy and laborious process, but it is a process that will help the country move forward at last.

Elena B. Stavrevska is a PhD candidate in Political Science at the Central European University in Budapest. She is also one of the founders and editors of the Cross-border Committee, a discussion platform for researchers of and from Macedonia.