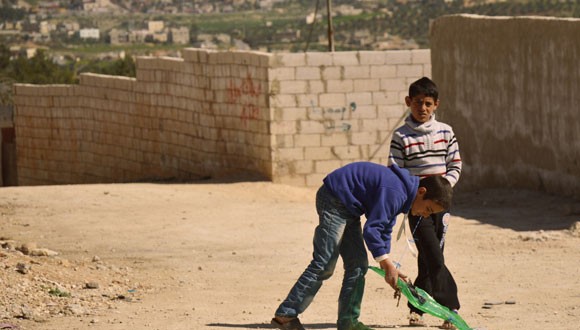 Two million Palestinian refugees live in Jordan but they are not all afforded the same legal status. Those originating from the Gaza Strip are not considered citizens, leaving them in a very precarious position.

The first time I visited Jerash Camp more than two months ago, I was tripping over a goat skull left on the ground, close to a halal butcher store. The market street was crowded by garbage and people, and an open sewer worked as a traffic divider. Trash was everywhere and market vendors were closing shop up for the day. Children played with the dust on the ground. A bunch of young boys came out from a huge breach on the wall of the local cemetery. Then, I realised why this place is considered the worst Palestine refugee camp in Jordan.

Jerash Camp, also known locally as Gaza camp, was established in 1968 for 11,500 Palestine refugees who fled from the Gaza strip, as consequence of 1967 Arab-Israeli war. It is located not far from the Roman stone ruins of Jerash. Currently, it hosts about 28,000 registered refugees, who live in an area of 0.75 square kilometres. If you want to understand its overcrowding, you have to take in consideration that Gaza Camp is almost twice as large as  Vatican City  populated by 845 inhabitants. In the Hashemite Kingdom there are ten official Palestine refugee camps led by United Nations Relief and Work Agency (UNRWA), which provide services for more than two million registered Palestine refugees in the country: 140,000 of them are ex-Gazans.

Palestine refugees are not all the same in Jordan. Unlike refugees from the West Bank those from the Gaza Strip are not considered citizens. This legal disparity has huge consequences in terms of protection of civil rights and on living conditions of the people. Indeed, according to UNRWA “ex-Gazans lack legal status in Jordan and are denied many of the basic services and rights afforded to pre-67 refugees, including access to state schools, government employment, and healthcare”. To understand the sense of this inequality is necessary to look to 1967.

After the Arab-Israli war, thousands of Gazans flocked to Jordan from the Gaza Strip, which was then ruled by Egypt. This is the reason why Gazans received temporary Jordanian passports, while most of Palestine refugees from the West Bank were naturalized. Indeed, West Bank was a Jordanian territory since 1950, when it had been annexed.

Every person I met in Gaza Camp was welcoming and so warm as to forget where I was: in a refugee camp which would fall apart if it wasn’t for people who try to aid inhabitants, through volunteering and activism. People of Gaza camp are very proud to be Palestinians and they feel strong ties to their roots. All of them,young and old, claim to return in Gaza, their land, occupied. The Palestinian right of return is felt very strongly here: “we want to return in our land, we are Palestinians” say the young people. Walking on the streets of the camp, I wonder about the consequences of their status has on the ordinary life of these people. Houses are wrecked, plaster crumbles away and many roofs are made of rusted asbestos sheets and corrugated zinc. “It is a big problem for us because we are whether-beaten”  says a 35 year-old man who lives in the camp. They can’t build a third floor or a small house without a special permit from Jordanian authorities. But this is one of the minor problems.

Despite UNRWA providing a wide range of services, inhabitants of the camp suffer a lack of resources. I understood their legal vulnerability through what they can or cannot to do.

They don’t have a national number, but just a passport that must be renewed biennially. According to the researcher Oroub El-Abed “the so-called passport serves two purposes: documenting the Gazans in Jordan as temporary residents (like an ID card), and providing them with a travel document (laisser-passer) at the international level so that they may access countries other than Jordan”. As result, they cannot vote or be represented in the parliament and not even to be registered in any political party.

Even though Jordan made concessions over the years, ex-Gazans live still in a precarious condition. Unemployment is higher than other camps, due to being impossible to work in the public sector. Working in the private sector is difficult for them as well because it is contingent upon Jordanian security approval.

Talking with inhabitants, I found out that there are many jobs that an ex-Gazans can’t do. Most  employed people work outside the camp boundaries. For them is impossible to get a work license for certain professions. ”You can’t be a doctor or working as lawyer or journalist” says Mohammad. He is in his late forties and works as employee out of the camp.

We talked over a cup of tea about the difficulties to survive in Gaza camp. “Starting an enterprise is difficult here because you have to pay taxes whenever interact with the state” he said. UNRWA helps inhabitants to starts a private business providing access to micro-credit, but it is not enough.

All these elements contribute to put ex-Gazans in a legal limbo, which cuts many possibilities to live a life like other Palestine refugees in Jordan. They have remained encapsulated within a historical and political bubble, alienating them from the opportunity to improve their lives, with their thoughts turned to the return to Palestine.

Dario Sabaghi is a freelance journalist interested in Conflict and Human Rights. He covered 2014 Ukraine crisis and worked as volunteer in Jordan.