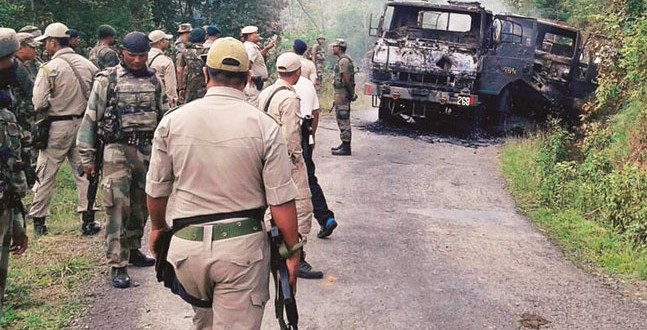 Early in April this year, nine prominent terrorist organizations active in India’s peripheral Northeast region came together to float a loosely united coalition – the United Liberation Front of Western South East Asia (UNLFW). All nine, which are either fighting for complete secession or political autonomy within India, are branded as terrorist organizations by the Indian Government. UNLFW is now steadfastly attempting to not only make its presence felt in the region through violence, but is arduously working towards its larger goal of establishing a government-in-exile based in Myanmar.

UNLFW has claimed responsibility for an attack on a convoy of the 6 Dogra Battalion of Indian army at Moltuk, about 15 km from the Myanmar border, on June 4th 2014. This was the largest such attack against the Indian army by Northeast militants in two decades in terms of total casualties. The ambush left 20 Armymen dead and 11 others injured, while the militants suffered no casualties. The operation was executed in a sophisticated way, using rocket-propelled grenades (RPGs) and improvised explosive devices (IEDs). Days before the formation of the militant alliance, NSCN-K cadres ambushed a convoy of the Indian Army’s 4 Rajput Battalion at Khonsa in eastern Arunachal Pradesh. Four soldiers were killed and many others injured. On 4th May, NSCN-K militants triggered a powerful blast and ambushed a paramilitary force convoy in Mon district of Nagaland along the border with Myanmar. Eight Assam Rifles troopers were killed, six others injured and four troopers reported missing, as officially confirmed by Nagaland Police chief LL Doungel.

Rajeev Bhattacharya, a well-known journalist who has been covering the Northeast insurgency for many years, says, “(such) high profile attack has some strategic purpose for the insurgents as it galvanizes the cadres and help them recruit more.” UNLFW’s attacks in pursuit of certain pre-conceptualized short-term goals (such as media attention, furore among locals, displaying strength to Indian authorities, etc.) are undoubtedly yielding successes. However, the new Indian government, led by the right-inclined Bharatiya Janata Party, has retaliated in a high-handed manner with the aim of completely neutralising the re-emerging threat. Soon after the 4th June incident, India’s Home Minister, Rajnath Singh, tweeted, “deeply distressed after the news of attack on Army convoy in Manipur. We will not allow the sacrifices of our soldiers to go waste.”

Accordingly, the Indian Government instructed the Army to launch a massive ‘search and destroy’ operation against NSCN(K) and other insurgent groups in the Northeast. On 9th June 2015, elite commandos of 21 Para of the Indian Army – equipped with assault rifles, rocket launchers, grenades and night vision goggles – made a surgical strike inside Myanmar, and destroyed two insurgent camps. Although the Myanmar government has refuted claims of any Indian military operation happening inside its territory, it is now well-known that the commandos went a few kilometres inside Myanmar. This marks a U-turn in India’s approach to dealing with both internal and external actors that pose any threat to the country’s territorial integrity and security. Such knee-jerk reactions usually end up killing innocent people, thereby further alienating local people. One question remains unanswered: are the people of Northeast region finding themselves safe and equally integrated as countrymen of India, while being corralled within the state’s overwhelming military milieu?

The idea of UNLFW was first conceptualized at a meeting held in Ruili in China’s Yunan province in early 2011. It was attended by leaders of four prominent Northeast insurgent groups, Paresh Baruah, leader of ULFA-Independent; S.S. Khaplang, leader of NSCN-K, and the leaders of Meitei outfits, United National Liberation Front (UNLF) and People’s Liberation Army (PLA). They collectively decided on forming a confederation to “achieve united and total struggle.” However nothing concrete emerged due to many internal and external reasons, like intra-party squabbling among individual militant groups, inter-party conflicts between Northeast militant groups and a lack of coordination mechanisms among Northeast militant groups. The visionaries of the idea continued to persevere, on a low-key note, to come together under one umbrella.

The formation of UNLFW progressively gained momentum from early this year. During the course of March, at least three rounds of meetings were held at undisclosed locations in Sagaing division of Myanmar with the backing of Chinese intelligence authorities, as reported by informed sources. The key meeting of 24th April, which practically hatched UNLFW, was attended by senior representatives from all nine participating groups – i.e. the National Socialist Council of Nagaland [Khaplang] (NSCN[K]), the United Liberation Front of Assam-Independent (ULFA-I), the Kangleipak Communist Party (KCP), Kanglei Yawol Kunna Lup (KYKL), the People’s Revolutionary Party of Kangleipak (PRPK), the People’s Liberation Army (PLA), the United National Liberation Front (UNLF) and the National Democratic Front of Bodoland (Songbijit) (NDFB[S]). Thereby it was decided that S.S. Khaplang will act as the new found group’s chairman, and Paresh Baruah as the vice-chairperson and commander-in-chief. Security sources said Khaplang, a Hemi Naga from Myanmar who maintains cordial relations with Tatamdaw (Myanmar army) and only recently abrogated NSCN-K’s 14 year ceasefire with the Indian Government, played a key role in organising this meeting of militant groups.

R.K. Meghen, Chairman of UNLF – the largest underground outfit in Northeast India – has been in Guwahati Central Jail since 2010, hence couldn’t attend in person. Although all Manipuri outfits party to the alliance had previously demanded that the Chairman’s position be given to Meghen, however, for the time being they’ve given up this demand for the ‘greater common interests’ of all parties to the alliance.

CorCom – an umbrella group of seven meitei (valley-based) militant groups of Manipur state – was formed when the leaders of these groups met on 8th and 9th July 2011 in order to discuss ‘revolutionary movements’ in Manipur and elsewhere in the South East Asian region. They agreed to work in the direction of establishing a United Front to bring unity among revolutionary groups to free Manipur from India’s ‘colonial regime’. This was a precursor for moving towards eventually forming an indigenous government-in-exile for Northeast region based in Myanmar, which now UNLFW is striving to achieve.

Indian intelligence sources claim that UNLFW and its constituent members are getting 90% of their weapons from China, especially from Yunan province. Although China has officially clarified that it is not lending any support to UNLFW, Chinese intelligence is unlikely to terminate its covert support for Northeast militant groups. Indeed, its engagements are likely to increase as the prospect of a rebel national government for the region grows. This would be an effective strategy for China in order to counter-balance the Dalai Lama-headed Tibetan government-in-exile in Dharamshala, which India has been hosting since 1959.

Ever since India’s independence, the federal government has unequivocally disregarded the self-determination aspirations of local ethno-national groups of the Northeast region. New Delhi has never made any serious attempts to address self-determination issues, despite the fact that the region has shared greater socio-cultural, political and economic affinity with adjoining regions, which now lie beyond India’s self-revered borders.

All previous Indian governments have endeavoured to solve secessionist conflicts as internal problems of law and order. At times they have been able to strike temporary ceasefire arrangements – usually ranked as ‘peace accords’ – with different insurgent groups, which have been renewed after the initial ceasefire period expired. Moreover, they have pursued all development activities in the region from within a national security prism, which has failed to bring any real development.

The stance of the present BJP government in India towards the Northeast region is no different from any previous government. This government has grand plans to make the region a ‘connecting zone’ between South East Asia and mainland India for trade and businesses. This has increased the region’s strategic importance, hence the Indian government is attempting to secure peace in the historically pursued ‘top-down’ manner. For example, the Armed Forces (Special Powers) Act (1958) – a controversial law that allows the army to investigate, arrest and shoot anyone on mere suspicion, while protecting itself from litigation and investigation for counter-terror – continues to be imposed in most states of Northeast at the behest of the federal government.

The coming together of local insurgent groups under a single umbrella, despite existing differences on their fundamental values and interests, signify attempts to synergize their individual grievances against the state. This strategy gives each of the participating groups added weight to their individual demands; necessary for securing the confidence of their respective constituencies. The very process of building the nascent alliance will yield substantive dividends for the participating parties, and this is why they will further continue in this direction.

The rationale way ahead

UNLFW will get stronger, structured and more cohesive, regardless of inherent divergences in the individual goals and ethno-national identities of the participating groups. This will come about as a situational need to sustain not just the Alliance’s existence, but the individual existence of the participating groups, for they are now facing the axe of a rejuvenated India that is in no mood for being lenient towards any form of self-conceived ‘terrorism’. The “Dhoval-doctrine” – which stipulates an offensive line of action for counter-terrorism under considerably increased strategic autonomy and options of India under the maximized leadership of Modi – has already been applied. A high-voltage action and reaction between the two belligerent parties is likely to ensue in the near future.

The durability of UNLFW will also depend on the patronage of external actors, both states and non-states. If the alliance is able to forge deep links with the PLA and its intelligence agencies, which is it is currently positively yielding, then it will certainly emerge as a military force to be reckoned with. Further, if the Chinese political establishment offers open political support for UNLFW’s struggle, which will depend on geo-political events concerning the Sino-American rivalry in the broader Asian theatre, then its survival is guaranteed. The alliance will move to create as many allies – strategic and non-strategic – as possible in Myanmar, Bangladesh, Pakistan and beyond. Although it might superficially appear as if the alliance is acting as a proxy to any state, in reality it will be driven by its own agenda.

Amid the whirlpool of political-military conflicts between UNLFW and the Indian establishment, it is the people of the region who will have to bear the brunt of the conflict. As in the past, today they find themselves being circumstantially placed between the devil and the deep blue sea; between a local insurgency and counter-terrorism reprisals. Over the six decades of India’s independence, the natives of the Northeast region have been significantly Indianized, however are not as yet fully Indianized. Until that happens, divisive conflicts will intermittently continue.