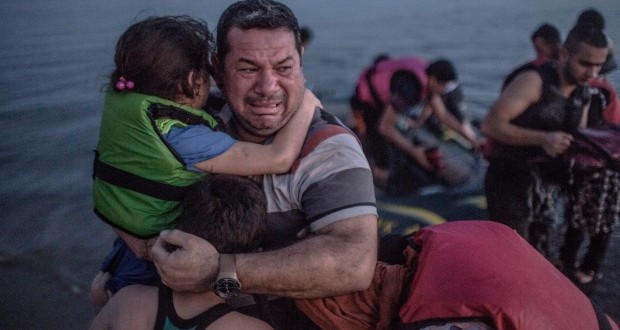 Photos emerging from the borders of Europe weave a new narrative around what it means to be vulnerable, to be a man, to say no to war and to be a refugee.

Three photographs of the refugee crisis unfurling at Europe’s borders have resonated particularly strongly with us from behind our tablets and TV screens as consumers of news, drawing empathetic gasps and a profound disquiet.

The first is a modern day rendering of the Madonna and child: Syrian Laith Majid clasps tightly his two children as he is brought ashore to the island of Kos in Greece after their tiny boat capsized; his face distorts in a look of abject desperation, his lip heaves over gritted teeth and tears stream from his eyes. Photographer Daniel Etter who took the photo explained on Facebook that while he may not be “the most emotional person…the father, Laith Majid, and his reaction when he and his family reached Greece still makes me cry.”

The second and third photos document the tragic death of a small Syrian boy, Aylan Kurdi. Laying face down in the sand as the tide washes over his tiny frame, his image has been replicated around the world: in graffiti on the London underground and in sand sculptures on the coast of India.

The third related photo that has become iconic of the crisis is that of Aylan’s father, Abdullah. Standing in a freshly dug grave in his native town of Kobane he holds his son’s body in a white shroud. A man to his left offers his own arms to support the little body. Abdaullah’s pained expression suggests he could collapse with grief at any moment, leaving the small boy to fall through his arms a second time.

These photos have mounted an attack on Europe’s political conscience and with effect. Some argue that it was these photos that finally prompted a response from British Prime Minister David Cameron who has in recent days visited refugee camps and committed more aid, further promising to welcome some 20,000 Syrian refugees to Britain.

Besides depicting Syrians forced to flee, the photos share another fundamental characteristic: they picture men. For it is men who are the protagonists of the current refugee crisis. Together these photos do not just document facts but they have begun to weave a new narrative around what it means to be vulnerable, to be a man and to be a refugee. They depict new masculinities of war that challenge the militarised assumptions that are now resurgent on the Hungarian border.

In common narratives of war it is the women and children who are the victims. The history books tell us that while the men stay and fight heroically, the women and children flee. ‘Woman and children first!’ From the historic Titanic to the contemporary flotilla of migrant boats with distress flares aflame in the Mediterranean sea, it is a common refrain. Despite the popularity of the trope of ‘man at war’ and ‘woman refugee’, the UN Refugee Agency reports that children constitute about 41 percent of the world’s refugees, and about half of all refugees are women. That means, of course, that the other half are men like Laith and Abdaullah.

Men’s experiences of war – and their ability to be victims of war – has long been neglected in the media and in research. It is only in recent years that the international community has begun to recognise the extent to which sexual violence is used as a weapon against men as well as women, for example. Meanwhile, the high levels of post-traumatic stress experienced by veterans returning to the US and the UK from Afghanistan and Iraq over the past decade have been well documented but ill treated, despite the US government spending over $3 billion in 2012 alone on rehabilitation. For many men, whether civilians caught up in the fighting or soldiers on the frontline, suffering remains a taboo.

Ziad Muhammad, 33 from Deiv Azzour who was tortured by the Assad regime (Demotix/Matthew Aslett)

The images of the two fathers depict a vulnerability rarely associated with men in times of war. In fact the dominance of images of men suffering on our screens has marked something fundamentally new in the way in which war is reported. This is something that has the power to radically alter our ideas about masculinities in both war and peace time.

A more traditional militarised vision of masculinity nevertheless appeared yesterday on our screens as fighting broke out between mostly male Hungarian border police and groups of mostly male refugees who have been barred from crossing the border from Serbia. The men once cast as vulnerable sea victims were swiftly and conveniently re-depicted as belligerent fighters who, by virtue of their sex alone, posed a security threat. Their protests to cross were met with tear gas and water canons. As one BBC reporter said, ‘it looks like a war zone on the edge of the European Union’. A Hungarian spokesman on the BBC spoke of ‘an armed mob of hundreds of thousands of people’, meanwhile Serbia strongly condemned the violent retaliation and “brutual treatment” from the Hungarian authorities.

The footage reminds me of the way in which protests and riots in immigration detention centres have long been portrayed in the UK media: desperate men, resorting to desperate measures are cast as anarchic threats as they try to survive having been forced to flee, the force used against them disproportionate and inhumane. What fails to be shown in either case are the peaceful tactics being used: hunger strikes rarely make good TV. As Chloe Lewis has argued on 50.50, the refugee man is ‘invisible’ and as such, a vessel for convenient securitised state discourses. In the ‘mob’, the suffering individual disappears.

I glance up from writing now and in one screen shot a baby who has been caught in a cloud of tear gas is screaming, its eyes stream with tears. ‘Look at this!’ shouts the father to the news camera, a situation that leads a representative of the Hungarian government to accuse the refugees of using their children as human shields. In another clip a man who has tried to cross is forced into an ambulance as he chokes with respiratory problems; his hands are cable tied. The refugees are now cast as bandits, with scarves over their faces to protect them from the tear gas; using force to try and break down the fence which was, until just recently, open.

Faced with increasingly restrictive and securitized borders, the conflict they fled has chased them here.

The human face of the refugees has dissipated; border crossing has become a combat sport, for ‘real men’ once more. While boat arrivals are met with a humanitarian response, the land border is governed by law and order. ‘The young men’, the BBC reports as I write, ‘decided to keep up their fight well into the night’.

The cynics who have already advanced the argument that the men fleeing are weak and should go back and fight for their countries find, in today’s footage, fuel for their fire. ‘If they came here to fight, why don’t they go home and fight the regime instead of running away!’ comments someone on Facebook. ‘It will now be our men who risk their lives trying to save their women and children’.

But for many, saving their woman and children is the point of their migration. For many male migrants, whether from Syria or Afghanistan, fleeing is a response to an economic war ravaging their families. Many war victims die at the hands of related food shortages, not bullets. The act of migrating, they believe, is a more productive contribution to peace than to stay and fight and perpetuate the violence. Through fleeing they seek to contribute money back home and perhaps to bring their families to a position of safety from their exile. As BBC reporter Lyse Doucet has commented, in some of these cultures, it is traditional for the men to leave first and establish themselves, meanwhile sending money to enable the family to survive back home. Border crossing is a great risk and families seek to spread risks evenly. ‘What other option do I have?’ says one migrant.

Some, having decided against militarism, will seek to continue their political struggle from exile. It is well documented that exiled communities can play a huge role in post-conflict reconstruction and in economic development. In exile refugees are able to stage opposition to the repressive factions and work towards peace from a position of safety. As a student I used to accompany hundreds of Zimbabweans to the embassy in London where week in, week out, they would petition for an end to human rights atrocities alongside allies from a position of strength and safety. Other more famous examples of the roles of refugees in bringing political change include the resistance fostered from exile against the oppressive Guatemalan regime. Led by Nobel Peace prize laureate, Rigoberta Menchu, refugees mobilised for a peaceful solution to the conflict and to secure the safe return of some 100,000 refugees. Many of the thousands of Eritrean refugees who make up the flows coming to Europe now will also remember the crucial role of Eritrean refugees in winning independence through referendum in 1993. They know that exile is a place of sanctuary but also a site for a new kind of fighting and politics; for peaceful mobilisation. For many refugees, the decision to flee is a decision to fight on without violence.

Refugees stuck between Hungary and Serbia (Demotix/Geovien So)

How do you fight ISIS? The truth is I do not know, but I do know that Abdullah and Laith wanted the very best for their children and thought that the best way to achieve that was not to go to war. Meanwhile, as another day begins and there is little hope of a diplomatic solution at Hungary’s border, the men who rub their eyes with water and tend to their wounds are still trying to flee it.

The explosion of violence on the border is a response to an increasingly desperate situation. But our news anchors, in their obsession with ‘these groups of men’ would do well to remember the famous portraits which elicited a very different reaction. Men cannot be cast as either victims or soldiers: they can be at once vulnerable and agentic too.

Jennifer Allsopp is a regular contributor and commissioning editor at openDemocracy 50.50. She has worked on a number of research projects at the universities of Exeter, Birmingham and Oxford including on asylum, youth migration, gender and poverty. She has also worked with a range of refugee and migrant organisations. She is a PhD candidate at the Department of Social Policy and Intervention and Refugee Studies Centre at the University of Oxford.