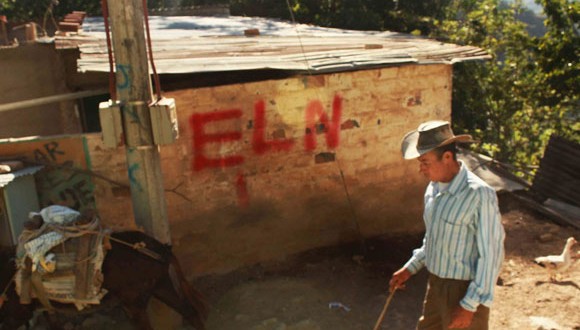 The Ejercito de Liberación Nacional (National Liberation Army) is central to the history of the Colombian conflict, not only because of their salience in particular regions but because peace will not be achieved in Colombia until all the groups exerting violence in the country are brought into a national peace agenda.

The Ejercito de Liberación Nacional (National Liberation Army, ELN) is a Colombian left wing guerrilla group which originated in the 1960s. It is central to the history of the Colombian conflict, not only because of their salience in particular regions but because peace will not be achieved in Colombia until all the groups exerting violence in the country are brought into a national peace agenda.

The ELN was founded by a small group of university students and has positioned itself for several generations throughout the country, with a discourse focusing on issues of natural resources, sovereignty and social justice. Its operations have been funded by kidnappings, extortion, and involving itself to some degree in the drug trafficking supply chain.

The possibility of formal negotiations with the Colombian government is thus a promising development; not only because of the possibility of peace widening as a national process involving different actors, but also because this inclusion creates an avenue by which peace can be cemented regionally. As more groups are brought into a wider peace process (not necessarily the same negotiation), the possibility of spoilers is reduced, the legitimacy of peace is increased and the opportunity for achieving synergies that reinforce progress toward a national peace process rises.

The peace process with the FARC has recently achieved an agreement in regards to justice and reconciliation, bringing closer the finalisation of the negotiation agenda between the Government and the FARC. The only remaining point of the agenda is the debate around demobilisation, disarmament and reintegration. However, caution is needed as this is not the first peace process Colombia has undertaken in recent decades. The signing of agreements is necessary, but not sufficient for peace.

It has been argued the failure of peace has been a consequence of the failures to implement a broader peace, the signing of agreements which leave the institutional settings unchanged and the lack of involvement and empowerment of the population. Therefore the official start of negotiations with the ELN is not the answer for these challenges, but presents a step in the right direction.

It is important to mention how the possibility of a peace process with the ELN might strengthen the possibility of peace initiatives succeeding and the necessary changes to make peace a reality in the country. The possible negotiation agenda with the ELN most likely will focus on elements that have been raised historically by the ELN: a national assembly, natural resource extraction policies and the consolidation of structural reforms within Colombian society, among others.

Agreements already reached with the FARC would offer a head start on the negotiations and agreements with the ELN. Settlements on political participation, agrarian policy, illicit drugs and a transitional justice framework have been reached already, rendering changes on previous agreements unlikely yet not unfeasible.

The insistence of the ELN on creating a national assembly resonates with another need from this process: the promotion of peace requires the involvement and empowerment of the population. In Colombia the institutional mechanisms have been set in place to promote a vibrant and active democracy since the 1990s (when a new constitution established a series of mechanisms to allow citizens to engage actively with the state). However, in practice this is not the case. The legislation and the constitutional rights of Colombians get diluted as theory meets practice in the isolated and marginalised areas of the country.

The Colombian peace commissioner is right to say that one of the main challenges of the Colombian state is how to ensure the conditions that allow demands from society to be channeled are created. The opportunity for mobilising local populations around peace presents an opportunity not to be overlooked; otherwise peace will be a short lived dream yet again. The translation and the protection of the rights and participation of those Colombians living at the periphery of the reach of Colombian state institutions through a practice of integration and inclusion, is a categorical imperative for peace that both the ELN and the state might be looking towards from different perspectives.

The key for this integration is the mobilisation of local initiatives and organisations, and their funding and support by the Colombian government and international organisations. More than half a century will not be changed merely with the signature of an agreement. The Colombian government has so far embraced a preemptive approach to peace from the top. The design of laws, initiatives and institutions aimed at promoting peace have been instrumental to get the peace process this far.

Fabio Andres Diaz is a Colombian researcher on peace and conflict.