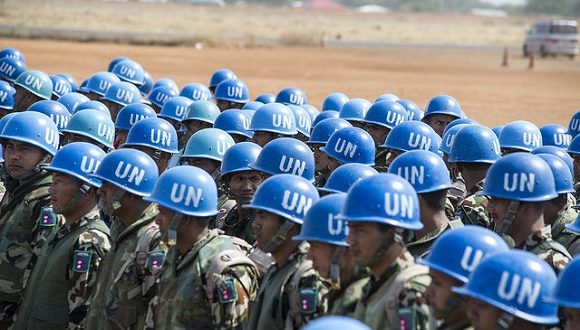 Recent research highlights some of the worst of many abuses which have taken place in South Sudan. But when the UN’s own investigations can’t be used as evidence, how to ensure that victims and perpetrators see justice? Two researchers on South Sudan discuss the difficulties.

Nobody knows how many people have been killed since civil war broke out in South Sudan in December 2013. Some have tentatively suggested that the death toll is now comparable to that of Syria, which has been at more than war twice as long – and received a great deal more public attention.

What we do know for sure though, following the work of human rights documentation work in South Sudan in recent years, is that the individual and collective pain suffered by South Sudanese people is immense. Last month, the UN Human Rights Commission released a report detailing the grave human rights abuses and violations of humanitarian law that have taken place in South Sudan throughout 2015. The report follows on the back of others by the UN Mission in South Sudan (UNMISS) and the much-anticipated, heavily delayed report of the African Union Commission of Inquiry (AUCOI), which covered the period from December 2013 to September 2014, but due to political pressure was not released until October 2015.

International and South Sudanese organisations and researchers – ourselves included – have also sought to overcome the clear deficit in accurate information and documentation on the damage of this war; to understand not just the effects but the cause as well. In an environment which has increasingly witnessed a crackdown on freedom of movement and expression, including violent threats, intimidation and deliberate obstruction of the media and researchers, such work is not easy, but this makes it all the more important.

A multitude of violations

The latest UN report walks through a multitude of violations of human rights and international humanitarian law committed by all parties to the current conflict, from the destruction of entire villages and livelihoods by the South Sudan’s standing army, the SPLA, and its allied militias, to mass recruitment of child soldiers by the SPLA and the rebel opposition, the SPLA-IO.

The litany of abuses reads like a rap sheet for civil wars globally: mass killing, forced and arbitrary detention, torture, ethnic targeting, deliberate starvation, and the terrorising of civilian populations. Notably, in South Sudan’s Unity state, the UN report details evidence of crimes against humanity, committed by the SPLA and allied militia during a military offensive in the spring of 2015. This report has also shed important light onto the spreading of the conflict from the country’s oil-producing regions in the north, to the Equatoria region in the south, which was until recently relatively secure and stable, but is now beset by violence.

Equatorian towns including Mundri, Maridi and Wonduruba, have seen forced displacement of thousands of people, destruction of property, the abduction of civilians and the terrorising of those populations, as the SPLA seeks to weaken burgeoning local militia groups and their links to the rebel SPLA-IO.

Moreover, the UN report is one of a number of research pieces which have laid bare the trend that this war has perhaps become most well-known for: sexual and gender-based violence. Indeed, in a recent research project carried out by national and international researchers it was revealed that rape is common practice in the conflict. A number of the women interviewed for the research spoke about the harrowing choice between being raped and killed. As one woman living in a UN Protection of Civilian (POC) site in the capital Juba told us: “The best they could do was give their bodies so that they could survive being killed.”

While much of the sexual violence seen in the current conflict appears to be part of some sort of collective targeting, the research also highlights the multiple purposes that sexual offences serve in South Sudan’s current civil war. The targeting of women by armed men outside the perimeters of the UN POC sites around the country, for example, was attributed to both intimidation of populations with the intention of keeping them displaced, as well the opportunistic actions of ill-disciplined recruits. It also touched on the possibility that the “rape camps” established in southern Unity State during the 2015 government offensive (also highlighted in the UN report) might have been used to incentivise participation and recruitment into armed groups in a collapsing economy.

Despite massive under-reporting due to social stigma, the research also discussed the sexual victimisation of men and boys during the course of fighting, pointing to both male rape and the castration of young boys. Thus far, efforts by both the Government of South Sudan and the SPLA-IO to investigate, document and enforce accountability for the acts committed under their watch have been by many accounts, woefully lacking. The UN report states that “there is no evidence or available public information of any genuine Government accountability efforts, or the results of these efforts, to investigate, prosecute or punish these violations,” and likewise that the SPLA-IO has failed to produce a long-promised investigative report to the AUCOI.

Our own research, among others’, has found that underpinning this vacuum of accountability is a national justice system that is extremely weak in capacity, that struggles to be independent in the face of visible politicisation and militarisation, and is prone to committing abuse itself. The Compromise Peace Agreement signed by both parties in August 2015 sets out a range of means for accountability to be undertaken by the (not yet formed) Transitional Government. These include a Hybrid Court for criminal prosecutions, that seeks to overcome the barriers to accountability by bringing in regional and international expertise. At best, though, this will only be capable of processing a minute fraction of the total volume of crimes committed, leaving the remainder to be dealt with by the national judiciary and ubiquitous customary justice systems in the country – or even not be dealt with at all.

Though the UN’s recent human rights documentation, as well as that previously completed by UNMISS and other organisations, represents a positive development in uncovering some of what has gone on during this war, its findings of grave human rights violations, possible war crimes and crimes against humanity by no means ensure that those crimes will be prosecuted in the Hybrid Court or any other international court.

Of course, the greatest obstacle to accountability will inevitably be – as it has been in so many cases in Africa and elsewhere – politics. That aside, the process will face further legal impediments along the way. Though it is rarely explained explicitly, the human rights investigations carried out by UNMISS are not treated by the UN Security Council – and we can assume other global judicial bodies – as an adequate standard of proof to permit criminal sanctions. Even the recent UN report somewhat ambiguously states that the standard of proof given in the report is only good enough to “call for a judicial investigation into violations and abuses” – in other words, it can draw attention to certain issues that merit investigation, but it is not treated as evidence in itself. Investigations by other human rights organisations, no matter how thorough, will carry even less weight in court.

Furthermore, as mentioned above in relation to sexual violence in the current conflict, the violations like the ones mentioned in the UN report often serve multiple functions for those perpetrating abuses. Despite common wartime tropes of sexual violence as a “weapon of war” or terror tactic, sexual violence like any other form of violence is not only an ordered strategy. While there is evidence to suggest that offences such as sexual violence have been used as a strategy, for instance, in Bentiu, Unity State, in April 2014, where it was reported that opposition forces used the local radio station to incite rape, at other times sexual violence appears to be far more indiscriminate, the result of indiscipline, or a reward for foot soldiers for participating in violence.

This is important to recognise, as it means that further investigations and prosecutions need to search for evidence above and beyond that of an explicit strategy of wartime rape. Finally, notwithstanding the almost exclusive focus on sexual violence by armed groups in the conflict, there is also a need to pay attention to the kinds of sexual and gender-based offences that South Sudanese experience on a daily basis, including forced and early marriages, domestic violence and marital rape. In fact, the same research discussed above noted that while a number of research participants talked about sexual assault at the hands of the Government and SPLA-IO forces, often their main sexual and gender-based violence-security concerns reflected other, less publicised forms of harm.  It is crucial that human rights abuses such as those highlighted in the UN report are addressed in any accountability process, our research findings also highlight it is also important to demand accountability for everyday experiences of injustice in order to ensure all survivors of violence can seek redress.

The authors are both researchers working on issues related to justice, armed violence and gender in South Sudan.