By jointly approaching and discussing the past in a multi-ethnic group, Serbs, Albanians, Bosnian and Turks in Kosovo find a way to come together again. Action for Nonviolence and Peacebuilding (ANP), a member of the Global Coalition for Conflict Transformation, is one of the few active organizations in Kosovo who is addressing this challenging and hard field, pushing for a civil narrative about the 1990s struggle from the grass-root level. In the book “The Soul’s Remembrance” you can read life stories written by the participants about the 1990s.

Public discussion in Kosovo society is marked by silence or ethnocentric narratives when addressing the violent times beginning in 1989, culminating in the war of 1999 and ending in the violent outburst of 2004. As of today the number of missing persons is about 1,700, which places a heavy burden on the process of reconciliation. Action for Nonviolence and Peacebuilding from Gjilan/Gnjilane is working jointly with their German partner organization, KURVE Wustrow, for a change in the culture of remembrance through documenting the past and listening to the people who passed through the turmoil of the nineties. In the ongoing project, “Dealing with the Past in Kosovo”, people from all parts of the country get empowered to share their stories and to present them to a wider public.

In October 2014, 16 participants from diverse communities started a joint process in Ulqin/Ulcinj, Montenegro, to share their stories and to hear what happened to members of other communities. The mutual understanding and recognition of suffering and pain is a process full of empathy, which reduces prejudices and prevents easy judgements. Before that was possible, the ANP trainer team worked with the participants on nonviolent conflict transformation, giving them the communication tools and approaches to be ready to face the past. A safe space was created where the participants could open up and speak freely about the hard time they went through.

Art is a good form for expressing difficult feelings and mixed emotions. The participants started to paint pictures about their life in the past and the difficulties, challenges and losses they had to face. The pictures are full of expression, strength and offer a deep view inside the hearts and minds of their authors. Also this way has been proven to be successful on psychological level as it provides the participants with the possibility to address heavy internal issues softly and step by step. To not only be focused on painful memories the participants furthermore created pictures with their ideal vision for the future.

By documenting the past the people involved in the project had the chance to contribute to a clearer picture of what happened in Kosovo during 1999 and the years before and after. This act of historicization is, on the one hand, essential to the individuals who don’t have to bear devastation, fear and striking memories in a state of isolation anymore but, on the other hand, it helps the society to build a foundation for a peaceful future. 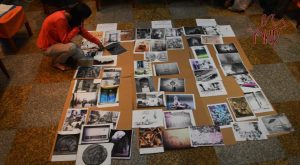 Besides the individual treatment of past traumas of Albanians, Serbs, Bosnian and Turks in the dealing with the past training, ANP is spreading the civil narrative about the struggle in 1999 by organizing art exhibitions in the capital of Kosovo, Pristina and by producing a book with life stories written by the participants themselves. In April 2015 the exhibition Circle of Memory (Albanian: Rrethi I Kujtesës, Serbian: Krug Sećanja) showed the pictures of the past created by the members of the multi-ethnic group in Pristina.

The book, which is the final product of two years of hard work, The Soul’s Remembrance (Albanian: Mbamendja e shpirtit, Serbian: Pamćenje duše) was published in December 2015 and is now available on the ANP homepage in all three languages.

Furthermore a documentary movie about the project process was produced and is available online. Here the participants tell openly how the training influenced their behavior and perception of dealing with the past in a post-conflict society and why it’s important to them to actively take part in that.

In a divided society like Kosovo, where narratives about the past mostly circle in ethnic homogeneous groups, and thereby becoming charged by prejudices and resentments, ANP will also in the future bring people together to pave the way for reconciliation. ANP ensures that past conflicts don’t become the reasons for new ones.

Action for Nonviolence and Peacebuilding (ANP) is a member of the Global Coalition for Conflict Transformation.