A conflict cannot be solved- and genuine peace cannot be reached, if the voices of one half of the population is not listened to on an equal level of the other half. An initiative called Political is Personal has taken it upon itself to contribute to the implementation of the principles of United Nations Security Council Resolution 1325 by conducting in-depth interviews with Israeli and Palestinian women, who share how their lives have been affected by the conflict.

In 2000 the United Nations Security Council adopted Resolution 1325, highlighting the importance of increasing women’s participation, role and voices on matters of peace and security in conflict zones. It represented an essential milestone at the time, and since additional resolutions have been completed UNSCR 1325, such as UNSCR 1820 and numerous organizations and initiatives have made it their mission to fulfill the principles of UNSCR 1325 in different conflict zones and in different ways.

The Israeli-Palestinian conflict is a conflict that has lasted decades, and which has been discussed, dissected and analyzed on so many different levels. Suggestions for how to solve the conflict have come and gone by locals and others abroad. While there are numerous organizations in the region composed of women, who are admirably active in their attempts to counter the status-quo in various ways, the lack of women’s voices is still deafening.

Political is Personal was established in April 2015 as a response to this lack and as an attempt to contribute to the fulfillment of the principles of UNSCR 1325, perhaps in a subtle way, by channeling and highlighting the voices of women, who live the conflict on a daily basis. PiP is not a dialogue group between Israeli and Palestinian women, nor a movement composed of women activists joining demonstrations, who defy the status quo. It “simply” enables Israeli and Palestinian women to convey to whoever is reading, how they live and experience this conflict in a non-judgmental, honest, safe and open environment and without being interrupted.

Unlike “conventional” journalism that oftentimes makes twists and turns to a story and filters all the so very important nuances down to “user-friendly” messages to optimize the article’s “sales-value,” Political is Personal is the interviewee’s tool to get her messages across in as raw and honest way as possible.

“I’m still negotiating, with myself, my family about who I am, and what I want. I try to encourage other women to at least at the very basis say: “What do I want?” (Her Story #22, Hope)

“Why should we run?” They started telling me that I was a terrorist. They were angry and afraid, and I couldn’t say anything.”(Her Story #26, Anonymous)

“When a soldier got stabbed recently, that’s when it got real for them actually. It could be me next year.” (Her Story #18, Anonymous)

“To say that I am happy in my life would be a lie. I’m not happy, and I never will be until the occupation is over. I know that because of the occupation I will always be late to class because I was stopped at a checkpoint.” (Her Story #5, Anonymous)

“A female Israeli soldier asked me to take off all of my clothes, except for my underwear, and to walk around the room. I cried and said that I couldn’t see, who was watching through the window. She began laughing and said, ‘No one is interested in seeing this!’” (Her Story #12, Manal)

These are excerpts of a few of the 29 stories that have been published so far on PiP’s website. They all show different realities and personal experiences of women (the “personal”) caused by the politics of the conflict (“the political”).

Although Political is Personal interviews Israeli and Palestinian women alike, the initiative in no way intends to demonstrate that the general experiences of Palestinian and Israeli women are similar. The focus of PiP is solely to channel women’s voices and to allow for whoever chooses to read their stories to make her/his conclusions about what she/he just read. 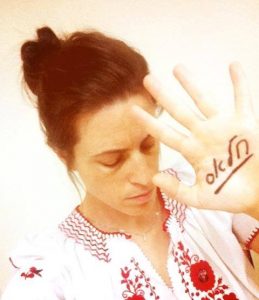 By collecting these women’s stories, PiP first and foremost sees as its mission to provide valuable data for study and analysis for think tanks, academics, scholars, policy- and decision makers. The initiative may, along the way, have other effects, such as creating human validation for the women interviewed as well as providing new and nuanced perspective on the conflict. Yet, the main focus are the women and what they have to say and making their words an important part of all considerations pertaining to the conflict and its sustainable and peaceful resolution.

Depending on the further development of the initiative, Political is Personal sees as its long-term objective to replicate the concept and interviewing technique unto other conflict zones in the world in order to contribute to the fulfillment of UNSCR 1325.

Sarah Arnd Linder, a francophone Jewish Dane, has lived in Israel for ten years, studying Government, Conflict Resolution and Middle Eastern History as well as having familiarized herself with many of the peace and human rights NGOs in the region. Due to personal experiences, her studies and her experiences within the NGO sector, Sarah Arnd Linder decided to create a platform for Israeli and Palestinian women’s voices and to found Political is Personal in April 2015.