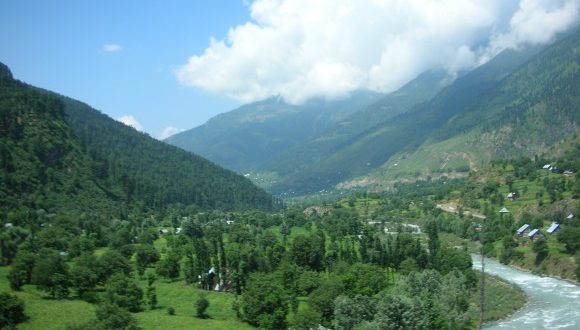 Since 1990, Kashmiri Pandits have been exiled from their community after violent attacks forced them from their homes. Now that their return is on the political cards, complex ideas of identity and reconciliation are coming to the fore.

According to the Press Trust of India report in April 2015, the Union Home Minister Rajnath Singh asked the then-Chief Minister, Mufti Mohammed Syeed, to identify land for composite townships for Kashmiri Pandits, a minority Hindu community living in exile. There are approximately 62,000 registered families outside the Valley.

Singh was assured by Syeed that the Jammu and Kashmir government would acquire and provide land at the earliest possible time as the state government is committed to an ‘Agenda of Alliance’ document between the BJP and PDP to form the government in the state, which aims at “protecting and fostering ethnic and religious diversity by ensuring the return of Kashmiri Pandits with dignity based on their rights as state subjects and reintegrating as well as absorbing them in the Kashmir milieu.”

However, rejecting the idea, Shailendra Aima, the Vice Chairperson of the Panun Kashmir Pandit political organisation seeking a Homeland for Pandits in the Valley, said: “Pandits have an equal right to the land of Kashmir and to develop it according to their own wishes. They also have a right to reject living in a milieu dominated by Islamists.”

Last month, Chief Minister Mehbooba Mufti once again reiterated in the Assembly the government’s commitment to bringing the Pandits back. She said: “As of now we cannot put them like pigeons among the cats”.

The announcement elicited a massive show of strength by separatist groups in Kashmir who called for a complete shutdown in the Valley, marked by street protests and demonstrations. Pandits found the resistance questionable and the allegation by separatists bizarre that the government had an ulterior motive in ‘setting up of Israeli like settlements in Palestine to change the demography’. They felt it was a part of a sinister design to thwart any initiatives for their return.

Public opinion was divided both in Valley and within the Pandit community. The majority of Muslims rejected the idea of ‘ghettos’, on the basis that it would polarise Kashmiri society and go against Kashmiriyat – the ethos of communal brotherhood.

Pandits rejected it because they did not wish to become sitting ducks in exclusive townships without trust and confidence from the majority community.

However, a section also vehemently asserted that they will choose when and how to return, meaning that while a return to their homeland is their birth right, it is by no means justice for them.

Justice would only prevail if the “genocide is acknowledged and their perpetrators are punished,” says Aima. He adds, “Pandit return is a question of justice that delivers on the larger question of their religious cleansing and exile, therefore is stringent on perpetrators.”

In the meantime, the nomenclature for the proposed townships was changed by the government from composite to ‘transit townships’, a foothold for the Pandits to eventually return to their own homes in the Valley.

In 1990, Kashmiri Pandits, a minority Hindu community in Kashmir, had to leave their homes when members from the community were selectively targeted, killed and raped. The perpetrators used religious spaces like local mosques, local press and hit lists pasted in public places to intimidate and terrorise Pandits to either join the struggle for independence from India, or leave Kashmir.

In the wake of recent renewed overtures by the government and public outcries, The Long Dream of Home, a compilation of Kashmiri Pandit narratives by Siddhartha Gigoo and Varad Sharma recounts the horrifying experiences of Kashmiri Pandit families.

The book describes painful narratives of the personal journeys of survivors from their homes in Kashmir to a life of exile in ‘migrant camps’ in Jammu and elsewhere in the country.

The stories foreground the sequence of events as they actually unfolded, dismantling what the Pandits believe are the myths and lies that have been constructed. These allege that Governor Jagmohan, who had taken over the administration of the state in January 1990, facilitated the exodus of Pandits so that the armed rebellion could be crushed and Muslims taught a lesson.

“At home we don’t talk about Kashmir. My wife is addicted to TV serial Zindagi (Life). I have nothing to do with television – I write or read,” responds Arvind Gigoo to my hesitant query: “Have you been able to reconcile?”

It was a scorching 43 degrees when I went to meet Gigoo – one of the thirty contributors to the book – in his Roop Nagar Jammu home, the only home he has now.

“I was mentally in a daze to be separated from my land, home and society and could not reconcile to the fact that, we have left our ancestral home in Kashmir.  But something clicked within me after 10-12 days of despair. I knew if I have to survive in this life, I will have to reconcile. And in half a minute I transformed. My mind accepted the new situation. Now, I live a life of a rote, like a robot, I do things that I did ten summers ago, knowing that after ten summers I will be doing the same things. Somewhere deep within life has come to standstill but like the TV serial it goes on,” his voice trails off.

While Gigoo and many like him have reconciled to their life in exile, they are not yet ready to reconcile with their life in Kashmir. I asked if he would go back.

“No I will never go back! I cannot live there!” and in a sudden unusual repulsion he scoffed, “I hate that koocha– the lane, architecture and smell of that place.”

There was silence and it then seemed he wanted to qualify his sentiments and emotional outburst: “We did not leave Kashmir, even after my friend was killed and most Pandits had left. Then one day a Muslim friend asked me whether I was associated with the Indian Intelligence agency. That was my undoing. My friend Hassan’s query had snapped something within.” Gigoo tells me.

Gigoo vividly recalls that his father sat in front of him weeping: “Unmindful I lit a cigarette, an unthinkable action in front of my father. My wife was shocked! I decided to leave the next day,” he says.

Gigoo’s own narrative, Days of Parting, mentions another friend, Quereshi, who tells him, “zadi would have been the best thing. Pandit is a venomous snake.”

It’s been 26 years since then and what was broken was not merely trust between friends and neighbors but a shriveled sense of identity. To be reduced to a label, to be scorned by someone with whom one has the deepest affiliation is a debilitating experience.

Reconciliation: a challenge or a dream?

The pain of isolation and abandonment lives in the Muslim heart too. When Gigoo went to clear his debts with a local Muslim shopkeeper, Yasin refused to take back the money.

“He sobbed and told me that you Pandits have betrayed us,” an expression borne out of love and expectation rather than treachery. Many Muslims long for Pandits to return to the Valley.

What must be understood in context of the tragic Pandit–Muslim, love-hate relationship is that there is the bitter reality of political ideologies that positions them as opponents, rather than supporters of each other. One abides by the idea of India as pluralistic, liberal, and democratic, and the other by the idea of a Muslim nation and separateness from India. Both are split vertically through a religious fault line.

Of course there is a Muslim constituency in Kashmir that swears by the ‘Kashmiriyat ethos’ – of brotherhood and syncretic values. However, politically and institutionally this is a weak, silent and passive constituency. The other is more organised, controls the opinion, discourse and narrative through variety of means including the gun. This perhaps makes reconciliation a challenging ‘dream’ to follow. Nevertheless, this dream shouldn’t be abandoned on the sacrificial political alter.

While there is a government in place advocating for peace, development, the return of Pandits and most importantly is politically challenging both separatism and communalism, the reality on the ground is that the property of Kashmiri Pandits has been sold, vandalised or occupied. Hence the government has no other alternative than to acquire land and construct new houses for Pandits.

Whether it will succumb to separatist and opposition dictates and whether the Pandits will go back to live in the intimidating environment will purely depend on how the security situation unfolds in the Valley.

Clearly, the return of Pandits is not only about reconciliation between Hindus and Muslims, but about the humanr rights of the exiled community. Now is the time perhaps when Pandit human rights issues, which the civil society organisations in Kashmir Valley have very ardently taken in the case of security forces violations, can also be taken up by local Muslim organisations and community to tangibly show their earnest intent to bring the Pandits back. By speaking out and demanding justice for the minority community, the majority community will be making a gesture which might open a doorway to future reconciliation.