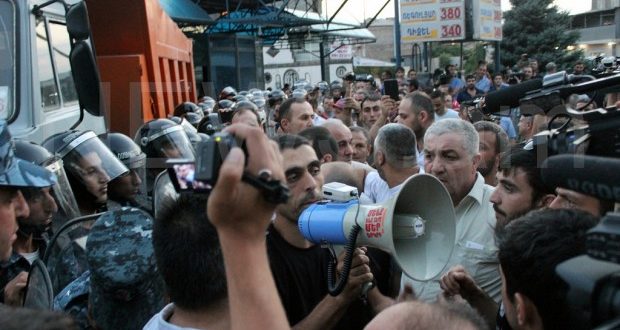 Was the July 2016 capture of a police station in Yerevan, the capital of Armenia, by an armed group planned by the Armenian government in order to put “land for peace” talks with Azerbaijan on hold, or was it simply fortuitous timing?

During the course of political events, an explanation for observed activity is usually not rigorous. Accurately understanding complex events, especially as they are unfolding, is rare as controlling interests trump press accuracy and social media abounds in rumor. One method for attempting to to understand such events is to lay out a set of competing hypotheses and rank each based on the amount and quality of the facts they are based on. This is actually a dynamic process, as new information can change the ranking of suggested hypotheses, leaving the least refutable as the leading hypothesis.

During July 2016 an armed group in Yerevan, the capital of Armenia, attacked and captured a police station, took hostages, and made political demands. Among the demands made by the twenty attackers were the resignation of the current president, Armenia not to agree to any land for peace in the frozen Nagorno-Karabakh conflict between Armenia and Azerbaijan, and the release of an individual arrested earlier on weapons charges. It is also known that the police responded very aggressively, especially after the armed group called on the Armenian people to rally around them in street protests. Such an attack, which resulted in the death of a policeman, would not be tolerated in any country where the rule of law is assumed. One need only view the actions of authorities in the United States during the Occupy Wall Street protests, or the public lock down and bellicose house-to-house searches in Watertown, MA in the aftermath of the Boston Marathon bombing in 2013. However, in post-Soviet states, allegations of government corruption and challenging economic conditions can make one person’s criminal another’s potential Robin Hood. Regardless of one’s position for or against the armed attackers, for or against the government, formulating the best explanation for events is still possible.

Among the spectrum of hypotheses explaining the event, including taking into account larger geopolitical events is that the armed event was a tool used – or created – by the Armenian government to purposely stall or greatly postpone the current negotiations between Armenia and Azerbaijan. The major reason why this is a leading hypothesis is because the Armenian government could not simply say “No, we will not give up any land for peace”, especially in the aftermath of the April’s Four Day War between Armenia and Azerbaijan in Nagorno-Karabakh. Russia brokered the Four Day War’s ceasefire between Armenia and Azerbaijan, yet supplied arms to both sides while a member of the OSCE Minsk Group. This group was formed to help settle this conflict. Russia has a rather overbearing position of influence regarding any settlement to this conflict. In addition, the failed coup in Turkey, coming only two days before the armed takeover of the Armenian police station, allowed one to further conclude that the subsequent rapprochement between Russia and Turkey, which furthers Russian influence in the region, would be at the expense of Armenia. Is it possible that the storming of the police station became the demonstration by which the Armenian government was able to say to the Minsk Group and Moscow, “See what may happen if negotiations continue along the lines of land for peace?” It certainly is possible, considering the unlikelihood of twenty armed attackers bringing down the Armenian government by violent means, as well as the Armenian police which appeared to exacerbate the situation. The latter ensured the event dragged out. Initially, little of this armed attack was reported in the Russian press, giving the impression it may not have been in Moscow’s interest.

The result: Armenian “land for peace” talks with Azerbaijan appear on hold. This may not have been possible by any other means. Was this fortuitous or planned by the Armenian government? Was this group infiltrated by the government and the fuse lit in the wake of the failed Turkish coup? These are open questions.