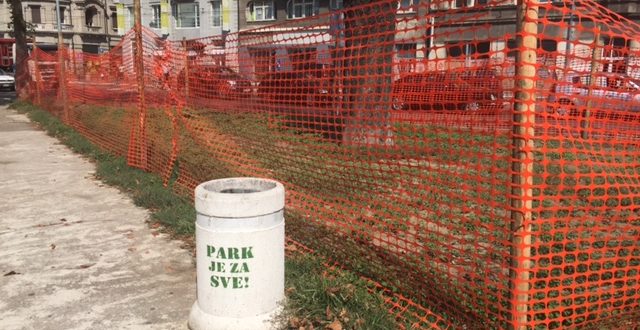 The official response to the refugee crisis across Europe and beyond has been a failure to engage in the hard work of imagining how newcomers, particularly vulnerable ones, can be folded into communities in a way that ensures both they, and the communities they enter, flourish. Until that happens ‘refugees welcome’ and ‘the park is for everyone’ will remain like some of the rest of the graffiti on Belgrade’s streets; an expression of life as we’d like it to be, not life as it actually is.

Belgrade has always been a contested city. The walls of its ancient fortress wind their way round the top of a bluff overlooking the curved confluence of two vast rivers, the Sava and the Danube. It should be a strategically powerful position but Belgrade has been battled over for centuries and frankly it shows. In the centre of the city neoclassic and art nouveau elegance and a handful of traditional Ottoman-era houses jostle with communist brutalism and shabby, post-war concrete housing blocks. Stand on the central square and you could be in either Budapest or Southampton depending which way you look.

While Belgrade’s architecture is a silent testament to the city’s difficult past, many of the streets are layered with a cacophony of graffiti that broadcast a continuing conflict with an assortment of contemporary ideologies. Amid the more generic spray-can postings are Belgrade-specific exhortations, exclamations and instructions that can be wry, ironic, cute, funny and disturbing, often all at the same time. If any city merits a slow walk with a phrase book or a Serbian-speaking friend, Belgrade is it, although one recent addition – a large, black and fantastically direct ‘PUTIN, FUCK OFF’ – needs neither, of course.

As Zygmunt Bauman writes in his book ‘Liquid Times’, contemporary cities have become the battlegrounds on which global powers and ‘stubbornly local’ meanings and identities clash. Indeed, for every ‘refugees welcome’ stencil in the arty Savamala district in downtown Belgrade, and for every endearing ‘friend not omelette’ painting of a chick, there is a flyer celebrating the return of nationalist leader Vojislav Seselj, a ‘to the death’ exhortation by the Ultraboys, or a new graffito denouncing UEFA as a terrorist organisation for admitting Kosovo into the world of the footballing elite. This is not to suggest that ultra-nationalists or football supporters can’t also be vegan or welcoming to refugees. But it illustrates the wide variety of doctrines in silent discourse on the walls of Belgrade’s buildings.

For Bauman, cities are becoming increasingly ‘vexing/confusing/irritating’ as the forces of globalisation continue to push people together in unexpected ways. Certainly in the Savamala district there are signs of an increasingly ambivalent response to the recent influx of refugees. Last year, for instance, when the city was surprised by the arrival of tens of thousands of people escaping conflict, persecution and hardship the public parks by the bus station became impromptu places of temporary refuge for families from Syria, Afghanistan, Iraq, Pakistan and a handful of other countries. Hundreds of people camped out on the grass in tents or on blankets while they planned the next leg of their journey north.

As the number of people sheltering in the park grew, some local residents brought them food and footballs, clothes and toys. As people mingled and talked, the crowds of refugees who had been visually levelled by similar experiences and misfortunes became individuals again; doctors, teachers, engineers. Brothers, sisters and parents.

This year, although the numbers have dwindled there are still people arriving in the parks each day, in search of a place to rest and the practical support offered by a clutch of local organisations. The parks, however, are hardly recognizable from last year. Nearly every section of grass has been churned up by the city authorities and cordoned off by swags of head-high orange plastic fencing. Now the only spaces available to people who need to linger here are the hot tarmac paths and the hard, slatted wooden benches that line them.

The park has become what geographer Steven Flutsy would call a ‘prickly space’, in other words a space that has been manipulated so that it cannot be comfortably occupied. And while prickly spaces function to exclude those judged unsuitable to inhabit them (however temporarily) they influence the behaviour of everyone.

And so it’s not just people seeking refuge that now find this space uncomfortable; so do local residents, including the group that used to protest here every day about the crowds, the noise and the dirt that had made their park unusable. In his book ‘De-Coca-colonization: Making the Globe from the Inside Out’, Flutsy writes that in contemporary cities ‘the sites in which daily life and face-to-face interaction take place, the streets, parks, bazaars and plazas, are being sacrificed to redundant zones of oversight and proprietary control. This does not only produce a hard city rife with even harder edges and sharp, pointy corners. It also threatens the free exchange of ideas engendering a progressive society. It creates an impediment to the crosscultural communication necessary to knit together the metapolis’s increasing diversifying communities.’

Moreover, prickly spaces like the parks in Belgrade allow potential conflict to be reimagined as a boundary violation, and its ‘resolution’ as something unilateral and predetermined that revolves around protecting and reinforcing these boundaries. It also allows a neat side step around an understanding of conflict as something far more challenging; a failure of ethical and moral imagination the resolution of which is likely to be laborious, painful and highly risky.

But it is the work of developing this ethical and moral imagination that lies at the heart of building resilient communities that (to coin Bauman’s terminology) are ‘mixophiliac’ rather than ‘mixophobic’; in other words, committed to the ‘lively yet turbulent, invigorating yet cumbersome’ interaction between people who are different. One key, as Baumann points out, is for architects and urban planners to design ‘open, inviting and hospitable public spaces’ that all categories of urban residents, permanent and temporary, would be tempted to share.

In fact, the increasing ‘prickliness’ of the parks in Belgrade has pushed people seeking refuge into nearby abandoned buildings where they are dangerously invisible to the agencies that can provide them with support. For the authorities, the fact that the refugees have made new unsanctioned homes for themselves in the centre of the city is another neat boundary violation that can be equally neatly resolved and the bulldozers have already moved in to demolish these buildings. ‘It’s all part of that development’ said one of the policemen, pointing to the nearby Belgrade Waterfront building site that is due to expand across this area. He was on site to make sure the demolition proceeded unhampered by the efforts of a small group of activists there to protect the refugees. He was friendly, keen to stress not only that clearing this land was part of the Belgrade Waterfront contract but also that it would be better for the refugees. ‘It’s dangerous for people here,’ he added. ‘They should go to the camps where they can get food.’

While that’s a comforting thought, the reality is that many people occupying these buildings have little reason to trust authority. Directly or indirectly a faceless officialdom has dictated the boats they take, the buses they catch, the benches they sleep on, the food they eat, the second-hand t-shirt they wear and the backpack they carry. For some people here, going to the official camps feels like a surrender.

And in a way, it is. Being ‘safe’ in a camp is a long way from the futures some of these people dream of. It also removes them from the companionship, communication and collaboration that helps strengthen communities. As Bauman writes ‘strangers tend to appear ever more frightening as they become increasingly alien, unfamiliar and incomprehensible, and as the dialogue and interaction which could eventually have assimilated their ‘otherness’ to one’s own lifeworld fade, or fail to take off in the first place.’ That works both ways.

Back in the park, a young refugee boy is chasing pigeons along the paths until they flap away to the safety of the bare earth behind the fences and the game comes to an abrupt end. A little further away people are queuing under the hot sun for a hand-out of food. There’s an overwhelming smell of soup, a fractious crowd and an exhausted volunteer who needs a day off. A group of teenage boys has collared another volunteer; even after the food they have been given, they are still hungry. I am struck by how people here have been divided into two groups; one reliant on aid and the other responsible for handing it out. And in the midst of it all is a small, subversive concrete bin, surrounded by swathes of orange fencing. With hefty irony, someone has stencilled ‘park je za sve’ on it, or ‘the park is for everyone.’ It is vexing/confusing/irritating indeed.

Of course people seeking refuge need much more than an accessible park to shelter in and so do the local communities that support them. Moreover, the parks in Belgrade are just a tiny part of a peculiar, parallel and prickly geography of conduits and spaces that has sprung up across Europe, shaped partly by officialdom and offering shifting, temporary and profoundly imperfect shelter and support to people who may be going nowhere, but must go there anyway. So far, however, on many levels the official response to the refugee crisis across Europe and beyond has been a failure to engage in the hard work of imagining how newcomers, particularly vulnerable ones, can be folded into communities in a way that ensures both they, and the communities they enter, flourish. Until that happens ‘refugees welcome,’ and ‘the park is for everyone’ will remain like some of the rest of the graffiti on Belgrade’s streets; an expression of life as we’d like it to be, not life as it actually is.

Bridget Storrie is a conflict specialist, based in Belgrade, Serbia. She trained as a mediator with the Justice Institute of British Columbia, is a PhD candidate and has worked as a broadcast journalist in Russia, Bosnia and the UK.

The views presented in this piece do not necessarily reflect those of TransConflict.