It is highly doubtful that a single person or group within the government can change Armenia’s military or foreign policy, for Armenia would still be subject to the same objective geopolitical realities in the region no matter who is in charge.

The recent resignation of Armenia’s Prime Minister has brought with it abundant commentary, most with little substance. Much of the reaction centered on the top new appointments: defense and prime minsters, Vigen Sargsyan, and Karen Karapetyan, respectievly. These new assignments are for a caretaker government, culminating in a fresh vote in May 2017 for members in a parliamentary government that will replace the current presidential system. The latter is more important than personalities in this case. Yet political analysts have attempted to draw correlations between these new power ministers’ business interests or educational training and changing the course of Armenia’s domestic or foreign policies. Usually analysts look for any business relationships – i.e. where an individual grew-up or was educated, family and ethnic ties, etc. – as a sources of data upon which they can suggest a policy-maker’s direction. However, it is too simplistic to assume any elected government could engage in near-dictatorial actions such as changing global alliances or countering obvious national interests based on personal whims. Why would even this be exceedingly difficult in Armenia?

Armenia’s domestic and foreign policies are directly related to geopolitics. Those geopolitics are centered around the simmering conflict in the Armenian populated region of Nagorno-Karabakh situated between Armenia and Azerbaijan (see map). In addition to Russian interests, Iran re-entering the regional stage, Georgia’s western aspirations, there is the two-decade old combined Turkish-Azerbaijani border blockade of Armenia and resulting regional isolation. Nagorno-Karabakh, where nearly 30,000 people were killed between 1987 and 1994, still witnesses periodic border clashes between local Armenians and the Azerbaijani army. Armenians were victorious in 1994 and run their own affairs today in this region, but it is claimed by Azerbaijan. This paragraph comprises an enormous set of geopolitical realities that cannot be ignored by political analysts if they expect to have an accurate assessment of the Armenian condition.

Map of the Republics and Major Regions of the Southern Caucasus 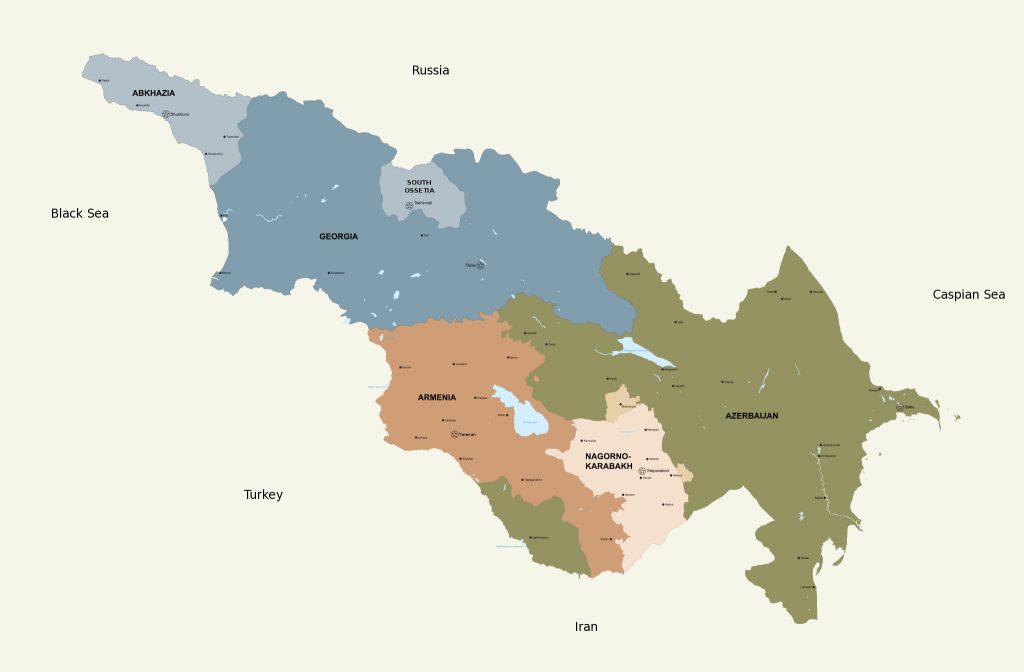 It is highly doubtful that a single person or group within the government can change Armenia’s military or foreign policy, for Armenia would still be subject to the same objective geopolitical realities in the region no matter who is in charge. All that is accomplished with a governmental shuffle in Armenia is to replace the players on one side of a game of Go; the game pieces remain.

Armenia’s existence was put into peril some twenty-five years ago, during the turbulent post-Soviet era. At that time potential global partners were busy disintegrating Yugoslavia, adding members to NATO, playing cowboy capitalism in many post-soviet states, and purposely over-estimating Caspian Basin oil reserves among other things. Armenia was left with no other choice for a best global partner, and that was Russia. The EU and US apparently had higher priorities. Based on their calculus at the time, perhaps they did.

Today, it is unclear what alternative global partners would be in Armenia’s national interest if even given a choice. One would think potential partners should be obvious, yet they seem illusive. Armenia in its current embodiment doesn’t represent much politically, in a relative sense, except perhaps as a potential irritant to Russia. Georgia’s Saakashvilli was such an irritant and lost South Ossetia. It is not accurate to assume that all events in the world execute as simplistically and as serially as on the Game of Thrones.

Perhaps the best example of the reality Armenia lives with is that Russian soldiers guard Armenia’s border with Turkey and have done so for over two decades. Political analysts must ask why this would even be necessary and, moreover, the impact of their removal before suggesting cookie cutter solutions to complex problems with multiple order affects.