TransConflict is pleased to showcase the work of the Civil Forum for Peace from Georgia, a member of the Global Coalition for Conflict Transformation.

The Georgian-Ossetian Civil Forum was founded in 2007 on the initiative of Georgian and Ossetian civil society activists and NGO’s, with the support of Dutch peace organization IKV PAX Christi.

The roots of the Georgian-Ossetian conflict run deep. On August 8th 2008, Russian troops expelled the Georgian military from Tskhinvali, the capital of South Ossetia. On 26th August, Russia recognized South Ossetia, along with Abkhazia, as as independent states. These rapid and startling developments accentuated the need for the Civil Forum for Peace’s mission and objectives.

The Civil Forum works to promote dialogue between the divided groups. More specifically, the Forum organizes different meetings among Georgian and Ossetian activists, experts and journalists; with youth engagement in this kind of events as one of its main priorities.

The Forum’s mission is to promote dialogue between Georgian and Ossetian societies; sustaining full social integration of those affected by Georgian-Ossetian conflict and the war of 2008; and pursuing the peaceful resolution of conflict. In addition, the Forum works to restore trust between Georgian and Ossetian societies in order to achieve a sustainable peace; and protects the rights and the interests of those affected by Georgian Ossetian conflict and the war of 2008, in particular the rights of IDP’s;

The Forum’s objectives are to establish alternative negotiation schemes through the participation of analysts and leaders; and to organize the peace process. The Forum also works to support youth initiatives and to launch advocacy campaigns on national and international levels; whilst developing economic, social and cultural links and reinforcing civil society.

Internally-displaced persons (IDPs) and those generally affected by Georgian-Ossetian conflict are a prime focus of the Forum’s work. The Forum provides legal support to such groups, monitors various developments around IDP issues; mobilizes resources necessary for funding some reasonable projects and programs, and cooperates with different business companies, donors and foundations.

For sharing experience Civil Forum with the support of donors organizes Georgian-Ossetian study trips in different European countries. In the framework of 2008-2014 forum, various Georigan-Ossetian joint meetings were held in different cities, namely in: Amsterdam, Hague and Leiden (Netherlands), in Ankara and Istanbul (Turkey), in Brussels (Belgium) and in Yerevan (Armenia).

Nowadays, the Forum gathers more than 100 civil activists and five nongovernmental organizations from Georgia and South Ossetia. The representatives of Georgian and Ossetian organizations as well as international organizations are invited as partners and experts in the framework of different projects.

Among the activities implemented by the Forum and its member organizations include the Youth Peace Express (2013-2014). During April and May 2014, a group of Georgian and Ossetian youth traveled together to Europe. During the journey they met students of universities and representatives of civil societies in Istanbul, Thessaloniki, Belgrade and Pristina, developed plans and mechanisms of future cooperation. Project participants received from their European peers their knowledge and experience, closely got acquainted with their values and activities. 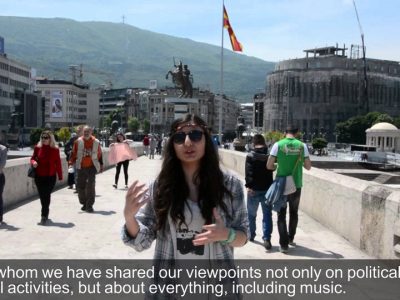 Other initiatives undertaken by the Forum include a Georgian-Ossetian documentary: “Peace Express”; a Georgian-Ossetian Peace Area (2012), an initiative entitled Journalists for Peace (2012); the Georgian and Ossetian Ex-Combatants for Non-Violence (2013); Georgian and Ossetian Young Photographers’ Solidarity to Peace (2012-2013); and sustainability of IDPs from Tskhinvali Region (2011).

The Civil Forum for Peace has played a vital role in building multiple ties between Georgians and Ossetians, at a time when relations have been frayed through war and unilateral recognition of South Ossetia as an independent state. The key to the Forum’s approach has been its emphasis on young people, and work with a disparate range of groups, including IDPs, trade unions, ex-combatants, journalists and photographs. The Forum has had the opportunity to share with and learn from international partners, but its efforts deserve greater recognition for transforming conflict in the Caucuses.

Please click here to learn more about the Civil Forum for Peace from Georgia!