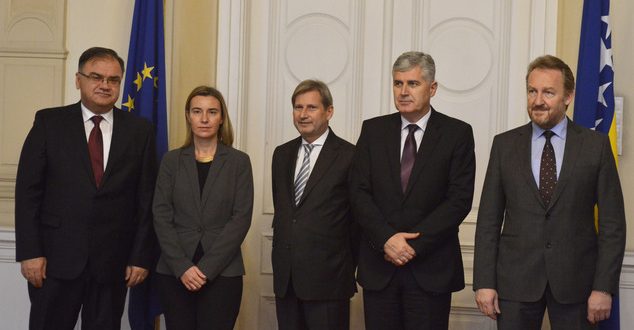 The last thing the region needs is more “attention” from the European Union.

Frederica Mogherini, the EU’s ersatz Foreign Minister, returned from a recent trip to the Balkans and solemnly told European potentates “there is no other power in the World that has had so much good on the Western Balkans as the EU.” This bragging gets to the heart of the matter. All sanctified rhetoric from Brussels about a “European path” for benighted Balkan states has nothing to do with the Balkans, but rather amounts to self-serving self-righteousness by a ruling class that exploits southeastern Europe for its exaggerated self-narrative.

Another European diplomat was quoted as saying “We have neglected the Balkans and now see it is increasingly fragile.” This is doubly false. The Euros have done anything but “neglect” the region. Since the 1980s succeeding generations of officials, NGO mavens, military personnel, and others have descended on Balkan troubles spots to issue lectures, give instructions, and assert that ”Europe” can implement a principled and strategically sound foreign and security policy. Branislav Radeljic has done a good job chronicling the serial inconsistencies and fecklessness (my term, not his) of European rhetoric regarding Kosova since the 1980s.

The Balkans are not “increasingly fragile,” even though Kosova, Macedonia, and – to an extent – Bosnia are in the midst of crises that could lead to serious violence. The diplomat’s statement carries the embedded assumption that the region has been less than fragile at some time in recent memory. (Is she or he nostalgic for the vice-regal regime of Paddy Ashdown?) In fact, there has been no movement in the Balkans toward poorly defined and conceived notions of democracy, multi-cultural politics, transparency, or civic society. These terms are slogans, not strategies; their mention signifies teleology not analysis. The expression “democratic backsliding” regarding the Balkans is nonsense – there never was institutional, structural development toward functional democracy in the first place.

The region is trapped in a feedback loop going back to the 1870s. Since then, various Wests have pushed their coercive utopias and have cooperated with the local Big Men at the center of the patronage networks that have never ceased to dominate politics and commerce underneath the cover of whatever forms of law and government are in vogue.

As things stand – just like with all previous security systems imposed on the Balkans since 1878 – the most likely future for the region is another round of violence as the prevailing security cap either weakens gradually or collapses more suddenly as a consequence of rivalries among local potentates and external powers.

Predicting which event in which part of the region or among which of the great powers will spark that fighting will remain very difficult – but some day something dangerous is likely to surprise everyone involved. The double crisis involving Austria-Hungary’s annexation of Bosnia and Bulgaria’s declaration of independence (1908-1909) was sparked by two ambitious and short-sighted foreign ministers, exploited by a “crafty” Tsar of all the Bulgarias, but did not lead to the larger conflict that might have developed. The Balkan Wars (1912-1913) started as a somewhat cooperative venture among Balkan states seeking to feed on the carcass of the Ottomans’ European holdings, morphed into a virulent squabble among Balkan victors, but then burned themselves out. The assassination of the heir to the throne of Austria-Hungary the next year at first seemed a much lesser crisis than its predecessors, but then turned in a different direction.

Your guess is as good as mine as to whether current crises will defuse themselves or spark serious violence. Bosnia remains permanently and indelibly dysfunctional, but so far no one wants to go back to war and it appears reaction to the most recent of the irresponsible performances by Milorad Dodik and Bakir Izetbegovic have crested. The Macedonian side of Macedonia’s political deadlock is highlighted by the duel for patronage supremacy (and, as a derivative element, political authority) by the less-than impressive Nikola Gruevski and Zoran Zaev. The real story there is the serious diminution of the influence of Ali Ahmeti on the ethnic Albanian side of the equation, the impact of that development on the agreement reached in Ohrid in 2001 that – much more than the country’s constitution – constitutes the basic law of Macedonia, and on the question of cross-border Albanian relations.

As for Kosova, squabbles over gaudy nationalistic decorations on trains, the detention in France of Ramush Haradinaj, and the so-far stillborn Association of Serbian Municipalities continue to reflect the stunted, unilateral declaration of independence mismanaged by US diplomacy between 2006 and 2008. The EU-mediated deal on normalization in 2013 ensured there will be no ”normalization.” That deal left Serbia and the notional Association of Serbian municipalities in Kosovo with agreed-to international status. Kosova, on the other hand, saw its own status kicked into the gutter. Belgrade and Pristina periodically will go through the motions of negotiating on phone codes, transportation arrangements, airspace, and other details, but there has been, is, and will be only one real issue – Kosova’s status. US, NATO, and EU cold shoulders to Kosova’s reasonable desire to morph its security forces into an Army is the latest setback to Pristina’s weakening effort to craft universally recognized sovereignty. If the EU really wants to show some leadership it should shake off its intellectual paralysis and make it clear to both sides that neither will become members of that shaky club unless they mutually —and non-violently — agree on Kosova’s status.

However current events turn out, the fact remains that the Balkans is the one region of Europe in which borders and rivalries over the material, memorial, and cultural stakes of identity were not decided by the wars during the first half of the 20th century that permanently destroyed Europe as a locus of world power. The Balkan region has been partitioned and re-partitioned and will be partitioned again. There is nothing wrong with recent calls for new partitions except that they should not be advertised as “solutions” — new territorial arrangements will define the pattern of future conflict rather than prevent new conflicts and rivalries for great power support.

It also should be remembered that any new partitions must be accompanied by managed population transfers – the mismanagement of the 1947 dismantlement of Britain’s collapsing Indian Raj put paid to the notion that such arrangements can lead to some sort of civic, multi-cultural or Herderian-inspired inter-national conciliation.

Balkan societies might finally dismount the treadmill that has led to so much suffering over the past century and more if, for the first time, authorities and civic notables demonstrate leadership. Progress would involve turning away from all the outsiders – none have anything to offer but platitudes and pain – and forge regional arrangements based on shared material needs rather than the memetic pathogens of nationalism, religious obscurantism, and patronal pride of place. This does not (necessarily) mean creating some sort of federation along the lines imagined by Prince Michael Obrenovic or Tito, but it would involve expanding current cooperation and negotiations over roads, railroads, and pipelines into regional economic arrangements devoted to building Balkan-wide transportation, trading, diplomatic, and cultural arrangements cleansed of the polluting interventions by serial Wests, Russia, and the rest of what is mis-termed the “international community.” Such work would be difficult and more than a little disorienting, but such dizziness is necessary if deep patterns of dependence are to be broken. Consultations with Africans, Latin Americans, and others similarly fouled by their experiences with foreign hegemons might produce useful conceptual cross-fertilization. There once was something called the “non-aligned movement.” It had its problems, but the idea might be worth dusting off.