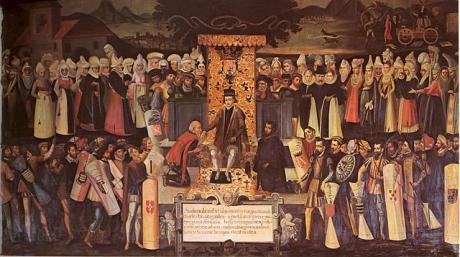 One of Spain’s most unlikely political alliances has ancient roots.

With only five seats in a Parliament of 350 Members, the Basque Nationalist Party (PNV-EAJ) is playing a crucial role in Spanish politics.

In a hung parliament, PP’s conservative government can only rely on its 134 MPs and two more that tend to be loyal. About 40 seats short, the government has to negotiate each legislative initiative with the opposition, where two parties stand out as most likely allies in tumultuous waters: the 32 MPs of the central-liberal Ciudadanos (“Citizens”) and the mentioned five from PNV-EAJ. After some political juggling, their support can be enough most of the time.

However, while Ciudadanos is comfortable with PP’s economic policies and anti-devolution Jacobinism, ideology does not explain the PNV-EAJ’s position. PNV-EAJ is closer to the social-democratic PSOE (allegedly closer than PSOE leaders towards each other), and in fact, they share power in the Basque government, in the three Basque provincial governments and in many local councils, including the three main cities.

Even Podemos (“We can”), which is supposed to be to the left of everybody else, included in its Ikea-style 2016 manifesto the expansion of the Basque welfare regime to the rest of Spain, and the recognition of the right to self-determination of the Basque Country and Catalonia, all of which suggests that there could be room for mutual understanding with them too.

Considering the ideological mismatch and the significant disagreement about the very idea of nationhood, how come Basque nationalists seem willing to reach agreements in Madrid with a conservative and unionist party haunted by corruption scandals?

I contend that PNV-EAJ is honouring its party name, not the Spanish PNV, but the Basque EAJ. While PNV stands for “Basque Nationalist Party”, EAJ literally means “Basque Party that advocates God and the old laws” (J for “jeltzale”,“jaungoikoa eta lege zaharren zalea”). The so-called “old laws” are more commonly known as fueros in Spain.

Leaving God for another time, PNV-EAJ’s politics are understandable in light of Basque history, going back centuries in time.

The fueros are the unique foundation of traditional Basque nationalism. Throughout history, fueros were the collection of laws and conventions that regulated private and public life in the territories that are now known as the Basque Country and Navarre. Swearing to respect and protect them was one of the first things that Spanish kings were expected to do upon coronation.

A variety of fueros regimes existed in other parts of Spain as well, but they were all taken away over time in the process of centralisation that has defined the progressive construction of the Spanish State since the late fifteenth century.

For example, Catalonia lost them in 1714 when the Catalan nobles supported the losing side in a succession war. You may have seen the Camp Nou chanting for independence on the fourteenth second of the seventeenth minute of Barça matches. That’s the reason why.

The Basque establishment picked the winning side in that civil war but miscalculated in two others that took place in the 1830s and 70s. As a result, the fueros were suppressed in the Basque provinces, to be later restored albeit trimmed down. This fueros-lite situation was the breeding ground where PNV-EAJ sprouted in 1895.

Together with rights and liberties, Franco took fueros away in 1937. Upon the re-establishment of democracy, the 1978 Constitution brought them back to the table. The First Additional Provision reads:

In 1981, King Juan Carlos I visited the Basque Country and, next to the iconic Gernika Tree, recognised the role of the Basque fueros, “confirmed by Spanish monarchs until the nineteenth century”, as the expression of “Basque unique features” and as an “essential part of the project that facilitated and encouraged the inclusion of the Basque Country in the very definition of Spain”.

Spain is now a federal or quasi-federal State, but the Basque Country and Navarre are the only two regions where devolution (or autonomy, in the Spanish constitutional parlance) is framed in the language of fueros. They are also the only ones allowed to regulate and levy their own taxes. Fueros are also the reason for this.

The fueros and their institutional architecture are one of the key factors why you don’t hear so much about Basque independence while Catalonia sometimes seems tied to Spain by a cat’s whisker.

The PNV-EAJ advocates a “bilateral relationship among equals” with the Spanish government in the fashion of old Basque nobles and the Spanish royalty. The logic of the fueros helps make sense of the bizarre and apparently anachronistic statement by the First Minister Iñigo Urkullu when Juan Carlos I abdicated in favour of his son in 2014. Mr Urkullu urged the newly enthroned Felipe VI to “acknowledge the particularities of the Basque Country” and to “respect the fueros”.

None of this suggests that Basque nationalists will never champion a more radical rupture. PNV-EAJ did favour such strategy about one decade ago, and the pro-independence Bildu, the second political force in the Basque parliament, opposes the idea of fueros as a historical oddity that prevents a unilateral separation from Spain should the Basque people vote for it in referendum.

However, in the current context the ruling PNV-EAJ seems relatively calm in power with the social-democrats thanks to the quiet abstention of the conservatives, while negotiating tax transfers and public investment from the Spanish government.

This political choice can be criticised on principled and even long-term strategic grounds, but it is not entirely devoid of rationality when you are the party of god and the old laws.

Koldo Casla is Policy, Research and Training Officer at Just Fair, which campaigns for economic, social and cultural rights in the UK.

This article was originally published by OpenDemocracy and is available by clicking here. The views presented in this piece do not necessarily reflect those of TransConflict.