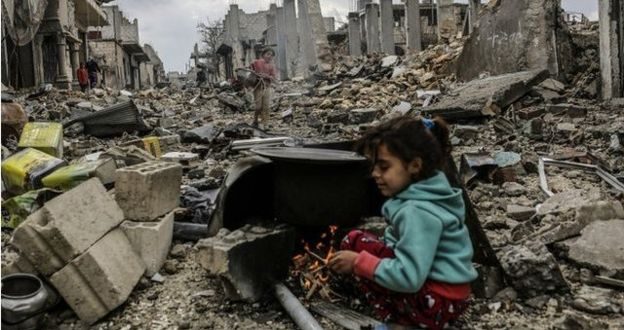 Is a rethinking of laws of armed conflict or international humanitarian law, humanitarian assistance and refugee policy not significantly overdue?

According to the 2016 Syrian Center for Policy Research Report, the war in Syria has claimed more than 470,000 direct and indirect casualties and victims since it began in 2011. While 400,000 deaths have been caused by violence or direct participation in the theatre of war, 70,000 were caused by indirect consequences of conflict such as food scarcity, malnutrition, poor sanitation, and communicable diseases.

South Sudan’s civil war and its cycle of retaliatory killings, abductions, and displacement have left behind a trail of 50,000 victims and some 200,000 in need of shelter while the ongoing conflict between Houthi rebels and an Arab coalition led by Saudi Arabia has, according to the UN humanitarian aid office, resulted in 10,000 civilian deaths, 40,000 injuries, and 10 million people in need of “urgent assistance.”

The all to frequent state collapse, protracted conflicts, civil wars, ongoing violence, skirmishes, and instability in Afghanistan, the Democratic Republic of Congo, Iraq, Nigeria, Pakistan, and Somalia paint a picture of a world in the midst of a serious crisis of conscience, which puts the efficacy of political global governance bodies, international organizations, and governing international legal regimes in question.

While convention and treaty law has over the last fifty years vigorously extended the normative framework for action and offered protections to the most vulnerable members of society while also preserving principles of equality and non-discrimination under law, our conflict-ridden twenty-first century has yet to make good on the lofty promises qua actionable rights enshrined in international law, particularly with regards towomen and children.

It is worth asking, therefore, whether a rethinking of laws of armed conflict or international humanitarian law, humanitarian assistance and refugee policy – which would emphasize a “Women and Children First” approach as opposed to  monolithic “non-combatant”/”civilian” versus “combatant” distinctions in present-day use in pre-conflict, conflict, post-conflict and evacuation situations – is not significantly overdue.

In the inter- and intra- state wars mentioned above and numerous others left out, women and children are the most common, helpless and defenseless victims of conflict, who suffer debilitating long-term consequences. Whilst severe conflict, state failure, civil and ethnic wars increase male mortality due to direct participation, female mortality is a result of indirect armed conflict participation with devastating public health impacts.

Sexual violence, rape, the ‘burden of caring for others’, which increases in times of conflict, makes women a particularly vulnerable at risk demographic, which imperils the lives and futures of their children and carries generational effects.

The World Health Report 2001, estimated that ‘310,000 deaths [in 2000 alone] were directly caused by conflict’ and an average of 4.75 years of life are lost due to direct armed violence or premature mortality caused by conflict.’

Humanitarian NGOs estimate that during the last ten years, an estimated 10 million children have also been killed as a result of armed conflicts, while the young survivors have been left traumatized, exploited, wounded, mutilated or disabled.

Separation from parents and the extended family makes children vulnerable to sexual victimization and civilian targets of antipersonnel mine and cluster bomb maiming in addition to involuntary enlistment as child soldiers or imprisonment and forced labor. Lack of access to healthcare, basic sanitation, and education has irreversible lifetime consequences.

In view of the above, international instruments, UN declarations, treaties, and enforcement mechanisms have severely failed in ensuring a minimum standard of protection to civilian population – including women and children – made all the more defenseless and endangered by cascading bouts of ever more sophisticated tools of extermination and brutal violence.

Despite the 2000 UN Security Council Resolution 1325 on “Women, Peace, and Security”, and the subsequent UNSCR 1820 (2008), 1888 and 1889 (2009) resolutions focused on gender-based violence in war, the international community’s ineptitude is made more pronounced by the staggering numbers of the very casualties and victims the international legal mechanisms have been designed to safeguard.

While the Bubonic plague is still regarded today as the  inordinately tragic disease of the fourteenth century – in both scale and numbers – it may be said that modern-day conflict is the self-inflicted plague of choice of ours.

In an age in which our moral compass has failed to show true North and increasing norm-relativism has led to absurdities in thought and demagoguery in action, a return to and an extension of a simple seafaring command of “Women and Children First” – first used in the sinking of HMS Birkenhead off the coast of South Africa on 26 February 1852 – to conflict zones and crisis situations may offer strong moral ground for resuscitating a normatively stagnant interest-ridden debate on the question of war and peace and help delineate a baseline of protection without which life of every man, woman, and child in war-zone follows a Hobbesian trajectory of being nothing but ‘nasty, brutish, and short’.

By prioritizing women and children in pre-conflict evacuation, conflict, post-conflict, and large-scale population and refugee migration scenarios can prevent states from barring conflict refugees on ‘national security’ grounds and widen the role of NGOs and humanitarian organizations to extend beyond the perilous and hard to reach conflict zones.

Strategically organized, coordinated, logistical rescue operations of women and children from conflict-affected areas, creation of safe zones with access to healthcare, and bestowal of a special protective status as (i) defenseless victims of violence; (ii) an especially vulnerable segment of civilian population; (iii) at risk of physical harm and psychological trauma, can ensure the fulfillment of the minimum human rights and humanitarian assistance standards enacted by international bodies and state signatories and prevent loss of life of innocent civilians caught in crossfire or washed up on Europe’s inhospitable shores.

If our sophisticated legal norms and principles can no longer hold any compelling sway over the artificially inflated influence of the UN Security Council and its liberum veto approach to grave international security concerns, perhaps simpler times and shorter moral dicta can teach valuable lessons.

When Central America went down on a voyage to New York in 1857, the December issue of Godey’s Lady’s Book suggested to its reading audience a moral imperative, by summarizing the sinking of the ship thus:

“Captain Herndon’s first order, ‘Save the women and children!’ was the test of this Christian heroism… Every man on board that doomed ship knew the captain was acting rightly.”

How shall we distinguish right from wrong; moral from immoral; just, principled and civilized from degrading and barbaric in the modern day spectacle of political collusion and war? Simply, by how much worth accrues to the weakest members of society encapsulated in the understated and long forgotten maritime distress call of ‘Save the women and children’ first.

Joanna Rozpedowski is a doctoral researcher in the School of Government and International Affairs at Durham University and the 2013-2014 US-UK Postgraduate Fulbright Scholar at the University of Liverpool School of Law.