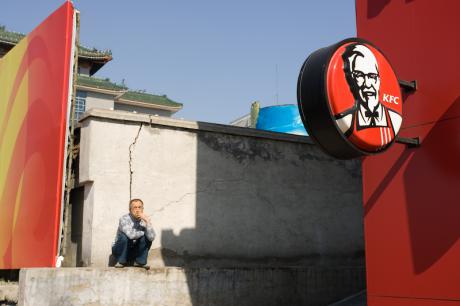 As Trump’s administration looks set to slash the budget of USAID and May’s Conservative party debate the future of British donor support, what is the relevance of international development in a globalised world?

One of the widely shared and discussed images from last year’s presidential election campaign was of Donald Trump sitting down for a dinner of a bucket of KFC with a golden knife and fork, and a copy of the Wall Street Journal when travelling aboard his private jet. The reading material and cutlery reminded audiences he was a successful tycoon, while his choice of chow showed a popular touch.

As well as being among America’s favourite fast food KFC is one of the winners of globalisation. Kentucky Fried Chicken is sold in 125 countries and China recently surpassed the US in the number of KFCs – 5,003 versus 4,270 outlets – representing both a growing desire for western fare in the east and the rising economic power of Chinese consumers. The owners of KFC have benefitted from the removal of barriers to trade and invested in new territories generating low-paid jobs and rewarding executives and shareholders in parent company Yum! Brands.

Globalisation has not spread prosperity evenly, and especially has not brought wealth to Africa. For instance, in Malawi, where there is only one KFC, 70.9% of people live on less $1.90 a day, a standard international poverty line – or the cost of a Coke at KFC. Like many countries in sub-Saharan Africa, Malawi is heavily dependent on donor support. Britain is the largest donor. Aid comes with strings attached and the UK, US and others use their influence to pull government policy in different directions.

One of the main outcomes and conditions of development grants, loans and debt relief has been to encourage economic liberalisation – the removal of barriers to trade and investment – to enable further integration into the world economy. An effect of globalisation has been increased Chinese investment in Malawi and other African nations. This new Asian superpower is becoming influential across the world’s poorest continent. China leads the way in extracting African natural resources and is now an increasingly important aid donor.

China’s own achievements in economic and social progress constitute the great global success story of the last four decades, notwithstanding the many political and environmental problems that persist. Dramatic growth came without the help of significant development aid; China did not trade money for control of economic policy. Rather than unbridled globalisation, Chinese leaders gradually and cautiously opened their economy to international competition, which set them on the road to prosperity.

The US, China and Malawi represent three tiers of affluent, emerging, and impoverished nations. Yet, the geography of global wealth is more complicated than crude divides between rich and poor countries. Malawi has some people who can afford KFC, and, in China, there are a growing number of billionaires with private jets of their own. Within each society, there is impoverishment and patterns of inequality. Many Americans have been let down by globalisation. They saw their jobs relocate to China and other low-cost manufacturing centres. At the same time, Malawians have struggled to compete in a globalised economy as they are unable to protect and nurture factories from competition with low-cost imports from China.

To return to Trump, it has been well documented that his popularity stemmed from tapping into many Americans’ discontent with globalisation. On the surface, the US remains affluent, but the economic structure of society increasingly resembles the dual economies of Africa: stagnating income for casual workers, migrants, and those without college education and growth only at the top. Trump will serve Wall Street rather than the electorate of Main Street middle America that supported him. The first 100 days in office have been chaotic and many policy directions are still uncertain, but one path he seems sure to follow is in slashing the foreign aid budget.

In Britain, as the election campaign rumbles on, Theresa May has come under pressure from the right of her party to drop Britain’s commitment to spend 0.7% of GDP on development aid. Her International Development Secretary, Priti Patel, has even argued that aid should be cut unless it works in the national interest. Despite this, it looks likely that this budget line will remain intact as a sop to internationalists and those sensitive to poverty, because the coming disaster of Brexit has satisfied the economic nationalist at home. However, under the Conservatives, future aid money will be funnelled towards dual purposes programmes such as national security and development, climate change and development, and commerce and development, so it can be double-counted and support defence, environment and international trade budgets.

This is bad news as some social development projects have had successful outputs. Most notably in the fields of global health, where funding has helped address major problems including in sanitation, maternal health, and through campaigns to combat childhood diseases. In general, what has been wrong with development interventions is the way they are used to enforce uneven neo-colonial relationships. The west has deployed financial leverage in the past to push through policies that stifle economic independence at the same time as distributing aid.

Neither the Trump administration nor a future Conservative government is going to promote alternatives to globalisation in Africa. If those on the economic right change policy they will likely cut the carrot of financial assistance and turn to the stick, e.g. proposing tariffs on imports from Africa to the US and UK, to force pro-market policies on the poor. Decades of neoliberalism in Africa have intensified inequality and failed to lift people out of poverty. Moreover, China and other emerging powers are now cutting new loan deals that have conditions attached that further pry open African economies.

Malawians along with the millions of other impoverished Africans and poor people elsewhere need to own their own development. This means protecting their economies, and nurturing sectors that provide meaningful jobs with living wages in industry and service sectors. In tandem, there is an urgent need for financial support to address the social and environmental concerns of everyone. Isolationism is not the answer, but ensuring economic independence can provide the foundation for prosperity. The growth of economic nationalism in the US and the UK poses a threat to the future financing of the International Development sector. It is unlikely that economic liberalism will be reversed in the ‘developing’ world. Leaders in Africa need to resist bad deals and be allowed to re-negotiate terms of trade and relieve some of the pressures of globalisation. Giving them the freedom to act in the interest of their citizens rather than maintaining and expanding relationships of dependency could provide a solution for global poverty.

Dr. Andrew Brooks is a Lecturer in Development Geography at King’s College London. His new book The End of Development: A Global History of Poverty and Prosperity (Zed Books, 2017) came out on 15th May.

This article was originally published by OpenDemocracy and is available by clicking here. The views expressed in this piece do not necessarily reflect those of TransConflict.