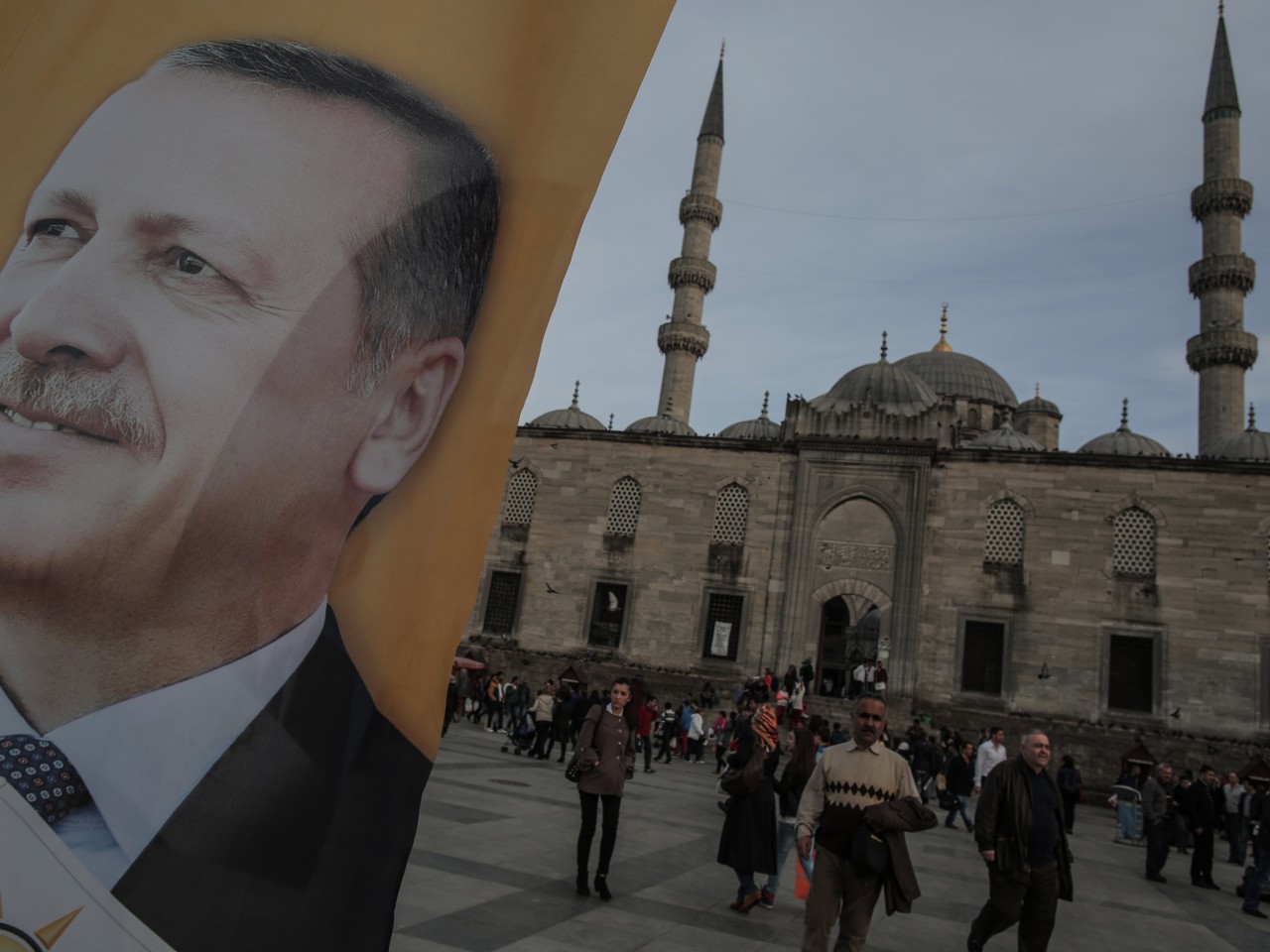 The rivalry between Erdogan and Gülen suggests that despite Erdogan’s efforts to decimate the Hizmet movement, he will end up on the losing side. The majority of the Turkish population has suffered greatly from his purges and gross human rights abuses; coupled with an alarming deterioration of the economy, he has become increasingly unpopular.

Until five years ago, Fethullah Gülen and Turkey’s President Erdogan were allies who supported each other. Both use Islam as the basis for their doctrine, which made them ideologically different from the revolutionary secularist stateman Mustafa Kemal Atatürk, the founder of the new Republic of Turkey in 1923.

That said, historically, the two Islamic orientations of Erdogan and Gülen were at odds with each other. The Gülen-inspired Hizmet (“service”) movement assumes and practices a Sufi version of Islam open to dialogue with other religions and believes in bottom-up change through education. Conversely, Erdogan and his Justice and Development (AK) Party embraced political Islam mostly adopted from the early Sunni Muslim Brotherhood, believing in top-to-bottom change, which they effectuated by usurping authority and forcing people to change through the state powers.

In 2011, Erdogan founded the AK Party; in the following year’s election the Party won a relative majority and Erdogan became the Prime Minister. His commitment to make Turkey a model of Islamic democracy coupled with economic development and socio-political reforms earned him overwhelming support of the Turkish people, including the followers of Gülen.

During the following seven years, he first focused on inclusive economic development to meet the dire needs of the poor and less educated constituency, which comprises nearly half of the Turkish population. As economic development was underway, he embarked on social and democratic reforms, including the subordination of the military to civilian authority and recognition of minority rights, including those of Turkish Kurds. His ability to deliver on these critical fronts allowed him to consolidate his power and move to the next phase to promote his Islamic agenda.

These initial reforms created a high level of confidence and trust in the AK Party rule among Turkish people together with the Hizmet movement, believing that the AK Party would rein in corruption and institute democratic reforms that were denied by previous Turkish governments.

For Erdogan, as he himself stated, ‘democracy is like a train; once you reach your destination you get off.’ His best cover was the continuing membership negotiations with the EU, albeit there was no prospect that Turkey would become an EU member state, nor was he negotiating in good faith as that would be inconsistent with his Islamic agenda.

Conversely, the Hizmet movement has no formal structure, no visible organization, and no official membership, yet it has grown into the world’s biggest Muslim network. Hizmet is dedicated to promoting development projects and education for the common good. Gülen’s supporters maintain that they simply work together in a loosely affiliated alliance inspired by the message of Mr. Gülen.

Since his self-imposed exile in 1999, Gülen has built up an impressive business empire. “His network of media outlets in Turkey and abroad had become increasingly powerful; his schools were grooming the next generation… his banks facilitated the movement and transfer of funds…where some countries’ financial affairs are governed by Islamic principles”, reported Deutsche Welle. Despite Erdogan’s crackdown on Gülen’s finances, thousands of businesses in and outside Turkey, as well as hundreds of thousands of followers, continue to contribute handsomely to the financing of Hizmet.

Fethullah Gülen left Turkey in 1999 at a time when he was under investigation for undermining the government, which at that point was still firmly under the control of Turkey’s secular elite and backed up by the military. In 2000, he was found guilty, in absentia, of scheming to overthrow the government, by embedding civil servants in various governmental offices – an indictment which he vehemently denies that would come back to haunt him later under Erdogan.

Prior to 1999, Gulen operated within a constitutionally secular Turkey, and his followers have for the past four decades spread throughout Turkey’s institutions. His advocates call him the ‘guru of moderate Islam’, marked by his humanitarianism while he was promoting his ideology through a network of high-achieving schools in Turkey and in about 140 countries. Whereas Gülen educated the youth with sciences and foreign languages, Erdogan was not as keen about education which mirrors his base, largely comprised of the poor and less educated.

Erdogan never trusted Gülen, but initially decided to cooperate with him in order to gain the support of his followers. But once he solidified his base and gradually assumed dictatorial powers through constitutional amendments, he was then in a position to do away with his rivals – chief among them Gülen – to realize his long-awaited “Caliphate” dream while resurrecting elements of the Ottoman Empire.

Erdogan’s intentions were to exert influence on governments around the world, especially in Africa and Central Asia, to close Gülen-affiliated schools in their countries. “When we look at Erdogan’s own statements and the documents unearthed in recent years, we can easily say that Erdogan has never liked… Gülen”, says Sitki Ozcan, a US-based reporter for Zaman Amerika.

Aydogan Vatandas, an investigative journalist from Turkey, says that the main reason that the leadership of the Gülen movement failed to see Erdogan’s real ambitions was due to their belief that subordinating the military to civilian authority and limiting the influence of the judiciary would not have a dramatic adverse effect on Turkish democracy. “It was wrong to believe that weakening these institutions would lead to the emergence of a democracy.” According to him, Erdogan has already consolidated his power to reshape the society, which led to the entire cleansing of the Gülen movement from Turkish society.

Since the failed military coup in July 2016, nearly 445,000 people have been the subject of legal proceedings on bogus charges of membership in the Gülen movement, including judges, teachers, police officers, and journalists, while snatching over 100 alleged members of the Gülen movement from other countries.

Nazmi Ulus, the Gülen movement’s representative in Kosovo, said that although the movement maintains their schools (Mehmet Akif Colleges) and is sustaining their activities, they no longer feel safe anymore, especially in light of Erdogan’s kidnapping of six Turks living in Kosovo in March. “Considering the people of Kosovo, yes we can say we are safe, but again considering the self-assertion… and also the ability [of Erdogan to blackmail and]… operate in the region, it is impossible to say yes, we are safe”.

Although Erdogan was able to nearly destroy the Hizmet movement in Turkey, hundreds of thousands of followers are still fully but quietly entrenched in private and government institutions and are well-embedded in scores of countries, including the US, which are beyond his reach.

The rivalry between Erdogan and Gülen suggests that despite Erdogan’s efforts to decimate the Hizmet movement, he will end up on the losing side. The majority of the Turkish population has suffered greatly from his purges and gross human rights abuses; coupled with an alarming deterioration of the economy, he has become increasingly unpopular.

Unlike Erdogan, to whom history will not be kind, however, Fethullah Gülen enjoys a non-elected position and will remain deeply revered by his followers as long as he lives and beyond. His socially-oriented Islamic philosophy and humanitarian services will certainly outlive Erdogan’s political Islam, which may well diminish once he leaves the political scene.