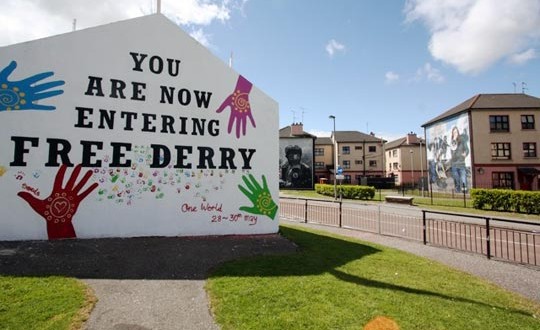 The UK seemingly leaving the Union, leaves neither Europe, nor History. It is time also for a new sensibility and a great refusal: we refuse to liquidate peace.

“Out of Ireland have we come. Great hatred, little room,

Maimed us at the start. I carry from my mother’s womb.

After waves of democratisation, waves of EU enlargement, we face now waves of Euroscepticism. Among the many arguments claiming to explain why the EU narrative is losing ground, the following deserves some comment: “peace”, for the EU’s founding fathers, the Robert Schuman generation, initially a convincing argument, is nowadays oversold.

First, we may ask if peace is really automatically guaranteed by the EU framework. A closer look at the UK’s EU membership instructs us that the euphemistically called “troubles” — or, technically, “low intensity conflict” in Northern Ireland — significantly marked the 30 first years of its membership (taking the year 2005 as one among various possible benchmarks for the end of the Northern Ireland conflict). Until the 2016 Brexit referendum, peace was granted for some 10 years. But while walls were torn down in Berlin, 48 “interfaces” (“peace lines”, “peace walls”, etc.) were erected and 31 refurbished in Belfast between 2000 and 2017.

Second, it’s obvious to everyone that the UK’s EU membership considerably softened the border between the Republic of Ireland and Northern Ireland. And this to such an extent, that it almost evaporated while the troubles gradually “disappeared”. Doubtless, EU membership contributed to this “peace by piece” process. Bizarre that many acknowledge this only now.

Third, the “unforeseen” consequence of Brexit is a wake-up call for the U2 generation: how many joined in the singing “Sunday Bloody Sunday” (1983) or “Miss Sarajevo” (1995) but were looking the other way?!

“Where Does Europe End?” was somehow a trendy question in the early 1990s. Sarajevo? Istanbul? were the tentative responses. We were all looking eastwards. Completely neglecting the fact the “western front” wasn’t quiet at all. Neither the IRA’s second ceasefire (1997), nor the Good Friday Agreement (1998) were by then on the horizon. But we were just looking away. Today, we won’t.

Don’t throw the baby out with the bathwater

There are of course many issues at stake nowadays: the ups and downs of the EU, the lack of convergence and the unfinished economic union, clear signals of de-consolidation and de-democratisation, irreversible climate change, the emergence of a new world order and, last but not least, the fate of the United Kingdom indeed. But let’s not forget the issue here: peace in Northern Ireland.

So, how to preserve peace?

First, we have to change software and consider borders differently: not as an arbitrary line of demarcation that divides, drives out and excludes, but as a common territory that is a zone of exchanges. The border is viewed in this light as a relation to the “other”; a skin or an interface that, by virtue of its porosity, binds and emancipates.

Second, Europe is made up of variety, the European Union being only one among various players. Europe is nowadays a complex multi-layered structure involving different types of partly overlapping integration and territorial cooperation schemes of varying depths and degrees of institutionalisation. Europe is thus already today a multilevel and multi-floor Europe with plurilateral governance and multispeed arrangements.

While the national level is gaining ground and the EU marginalized, other actors such as the Council of Europe, the OSCE and UNECE could fill the gap with well-designed cross-border programmes in order to soften the border and support most effectively the key “Backstop” option.

Third. Culture and art-oriented organisations, peace-building groups, grassroots anti-sectarian and anti-racist organisations, such as Belfast Exposed, Compassionate City of Belfast, Belfast Interface Project andTrademark Belfast –  to name only a few, working on the interface between communities to develop positive relationships, must receive wind in the sails. Their effective contribution to come to term with legacies of the past, to develop respect for cultural difference and diversity will in the coming weeks play an absolutely key role.

The UK seemingly leaving the Union, leaves neither Europe, nor History. It is time also for a new sensibility and a great refusal: we refuse to liquidate peace.

The views expressed in this article do not necessarily reflect the views of TransConflict. This article was originally published by OpenDemocracy and is available by clicking here.