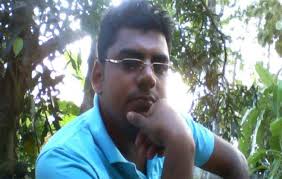 For over 80 days, Shakthika Sathkumara, an award-winning Sri Lankan writer and poet, has been held in police custody.

For over 80 days, Shakthika Sathkumara, an award-winning Sri Lankan writer and poet, has been held in police custody.

The reason for his detention? The publication of a fictional short story about life in a Buddhist temple; a story which allegedly alludes to child sexual abuse involving members of the clergy.[1]

Shakthika’s arrest on 1 April 2019 followed a series of complaints to police by Buddhist organisations. He has been charged under the ICCPR Act – a piece of legislation that is, somewhat paradoxically, designed to give effect to the government of Sri Lanka’s obligations under international law to protect freedom of expression.

Lawyers and human rights experts have roundly condemned the arrest as a gross misapplication of the law, emphasising that the relevant section under which Shakthika has been charged is clearly aimed at tackling the incitement of violence on the grounds of religion, race or nationality – and not merely causing religious offence or insult.

While a legal challenge is now well underway, Shakthika’s freedom continues to be denied ahead of trial; a trial which he seems almost certain to win on a proper and impartial reading of the law. At his latest hearing at a magistrate court on Tuesday (18 June), he was yet again remanded, with a further hearing due to take place next week (on 25 June).

Unfortunately, the ongoing detention of Shakthika appears to be not an isolated injustice, but rather part of a wider coordinated assault on freedom of expression by hardline – but influential – Sinhala Buddhist groups on the island; an assault that has gained in intensity following the Easter Sunday bombings.

In May, a Muslim woman, Abdul Raheem Masaheena, was arrested under the ICCPR Act for wearing a shirt depicting a ship’s helm, an image which complainants to the police had wrongly suggested was a Buddhist symbol, the dharmachakra. Then last week – also under the Act – the authorities threatened to move an investigation against Kusal Perera, a respected journalist whose alleged wrong-doing consisted of the mere mention of growing Sinhala Buddhist extremism on the island. These recent incidents take place against the backdrop of years of sustained harassment and targeting of Tamil journalists and activists under the current regime, as recently manifested in the appalling hate campaign against Tamil Guardian editor, Thusiyan Nandikumar.

The latest crackdown on freedom of expression under the auspices of the ICCPR Act in Sri Lanka are rendered all the more outrageous and frustrating by the government’s abject failure to hold to account the perpetrators of actual recent identity-based violence, as well as those inciting it in plain sight. This week’s latest remarks from one of the seniormost figures in the Buddhist clergy in Sri Lanka suggesting some Muslims should be stoned to death – deemed “classic pre-genocidal language” by staff from the International Crisis Group – have scarcely been remarked upon by Sri Lanka’s leaders, let alone investigated by the authorities. Last month, another extremist monk, then serving a jail sentence for contempt of court having threatened a disappearances activist, received a Presidential pardon and was released.

In the wake of recent attacks against members of Sri Lanka’s Muslim community, the potential consequences of these recent developments – both for freedom of expression, and the risk of further violence against Sri Lanka’s minority communities – are deeply worrying. Of further concern, the government has signalled an intent to bring forward an unnecessary and potentially oppressive hate speech law, a move which could further embolden those currently attempting to curb free speech on religious grounds.

Please help bring an end to the ongoing injustice of Shakthika’s detention – and ensure that a line in the sand is drawn against the current surge of attacks on freedom of expression in Sri Lanka – by acting now. There are two suggested ways in which you can lend your support: