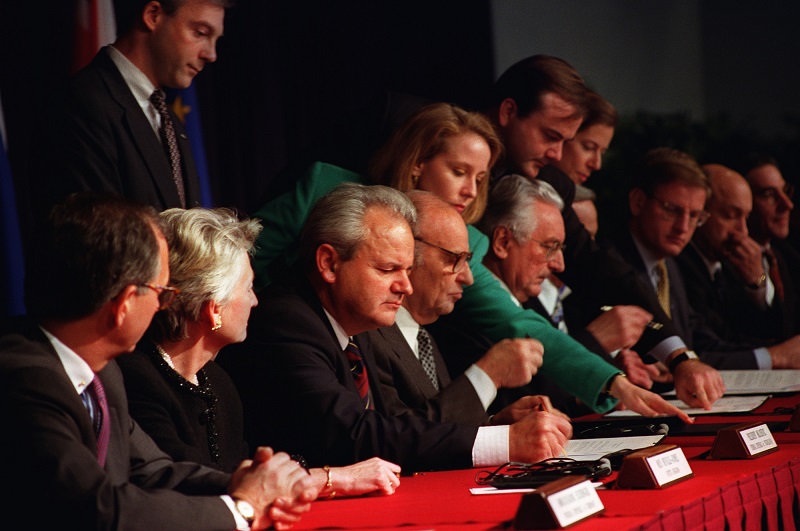 The Agreement did not stop a war. It skewed a peace.

In the winter of 1994-5 Ratko Mladic made a mistake that would lead to atrocities and his side’s military defeat.  Mladic decided to concentrate his forces in the east so he could reduce Bosnjak enclaves.  This strategy led his troops to commit genocide at Srebrenica.  Meanwhile, in the West Bosnjak and Bosnian Croat forces overwhelmed Bosnian Serb units, driving them West and greatly reducing the percentage of Bosnian territory under Serbian control.  This, limited NATO bombing of Bosnian Serb forces, and the destruction of the short-lived Krajina Serb Republic in Croatia is what ended the fighting.  The lines stabilized by October 1995, enabling Western powers to organize diplomacy supposedly designed to set the region on a path toward peace and stability.

Instead, what became known as the Dayton agreement was an exercise in appeasement, a term associated with the successful re-integration of France into the international system after 1815 and a much less fruitful effort to do the same with Hitler’s Germany in the 1930s (after a promising diplomatic false start in 1925).  In 1995, the American-dominated negotiations created a Bosnia saddled with both an impossibly weak central government and a division into ethnically determined entities (one already created in Washington in 1994).  This congenitally unworkable framework was made worse by Washington’s decision to stick to a formula under which a centralized Bosnian Serb republic would have 49 percent of the country’s territory, while the fractious Bosnjak-Croat federation would divide the other 51 percent.  These numbers first had been considered at a time when the Bosnian Serbs held about 70 percent of the country.  Forcing the Bosnjaks to accept it at Dayton meant the reintroduction of Serbian control into parts of western Bosnia and preventing the creation of a contiguous Bosnjak presence from the Northwest to Sarajevo.  This was fine with both Slobodan Milosevic and Franjo Tudjman (who also could enjoy the fact of Bosnian Croat control of the strategic town of Jajce).   On the other hand, Alija Izetbegovic was given no choice but to swallow what became Milosevic’s one great diplomatic success during the period oi Yugoslavia’s dissolution.

Since that time, the Western authors of Dayton have sugar-coated the contradictions they created with a narrative stressing international leadership and good faith, abetted by an alleged yearning by civic-minded Bosnians of all backgrounds for multicultural politics but thwarted by ill-intentioned nationalist forces.  It is no surprise that the Republika Srpska (RS), Serbia, and their Russian allies are the ones who want to maintain the Dayton system as it is, while the agreement’s Western authors have been engaged in futile attempts to impose changes in the deal ever since the end of the vice-regency of Paddy Ashdown.

The coincidence of Dayton’s 25th anniversary and the impending change in US administrations may well lead to a return to the policies and rhetoric that have produced so much frustration and failure.  The line almost certainly will gloss over the contradictions inherent in the old paradigm.

It is past time for the US and EU finally to think seriously about how to improve on a quarter century of false starts in their Balkan engagements.  They might consider the following suggestions: