It seems clear that KFOR and EULEX were responsible for the initiation and escalation of violence in Jarinje in north Kosovo on September 27th, and an independent inquiry is urgently required to establish the facts.

It is always difficult after the fact to know for sure what happened in a violent confrontation as happened in northern Kosovo on September 27. But despite EU and KFOR protestations of innocence and casting of blame on Serb “extremists,” it seems clear that they were responsible for the initiation and escalation of violence, as well as the use of live fire. There appears to be no evidence that they were fired upon – no gun injured soldiers offered up – and the essential fact remains that they used force to impose Pristina’s political blockade on the northern Serbs. Additionally, there may be a cover-up operation being conducted to hide the truth. An independent inquiry is required to established the facts and, until then, none of the Quint capitals should feel free to use the day’s events to justify further repression by KFOR and EULEX.

The EULEX report on the operation it called “Reinstating Gate 1” can be found below. It clearly shows that events started moving toward confrontation only when KFOR sought to close an alternate road used by Serbs to circumvent the barricaded official crossing. Angry Serbs threw rocks – David vs Goliath? – and KFOR responds with tear gas. A neutral international observer says that Serbs began gathering mid-morning at the secondary road near Gate 1 to protest the arrest of the person reported to have “attacked” an armed US soldier. When KFOR started using tear gas a while later, Serbs began throwing stones while retreating. Then KFOR started firing rubber bullets injuring at least one person. Things remained otherwise calm until afternoon when a large number of Serbs gathered again in front of the bypass as a local truck driver tried using his truck to push aside the barbwire placed by KFOR to block the road. German KFOR again used teargas and US combat soldiers emerged and pointed weapons at the civilians already trying to move away from the gas. At that point, there was gunfire – live ammo and rubber bullets – and the truck driver was shot. The Serbs then ran from the scene.

It was observed later in the day that KFOR prevented a UN military observer from visiting the scene and bulldozers appeared to be clearing the ground, removing evidence of the days events. Local Kosovo police who went to investigate the earlier events reportedly were ordered to leave and shot at by an American soldier as they were collecting spent ammunition that appeared of a type used by NATO.

The combined NATO/EU action to enforce Pristina’s political agenda was another blatant violation of their UN peacekeeping mandate. The EU/KFOR efforts to shift blame onto the Serbs suggests shameless cynicism and arrogance of a high order. Some Serbs may have reacted to the strong-arm tactics used against them by throwing stones and firecrackers used at sports events (as one admitted to me). Some may have even possessed weapons and fired them into the air. This can be investigated too. But the violence was provoked and escalated by those sent to Kosovo to keep the peace. The Quint countries – the US and Germany especially – have used their control of KFOR and EULEX to push the northern Serbs into a tight corner and are now trying to tighten the wire around them. As the local Serbs see it, they have no choice but to resist or flee. They will not flee their homes, though they could be driven off if that is what NATO seeks to do.  So far, EULEX says it remains determined to take down the remaining barricades and supports the actions by KFOR.  The situation created by NATO and the EU is very dangerous and, unless they stop their provocations and return to status neutral peacekeeping, it will only get more so.

Gerard M. Gallucci is a retired US diplomat and UN peacekeeper. He worked as part of US efforts to resolve the conflicts in Angola, South Africa and Sudan and as Director for Inter-American Affairs at the National Security Council. He served as UN Regional Representative in Mitrovica, Kosovo from July 2005 until October 2008 and as Chief of Staff for the UN mission in East Timor from November 2008 until June 2010. Gerard is also a member of TransConflict’s Advisory Board. The views expressed in this piece are his own and do not represent the position of any organization.

To read other articles by Gerard for TransConflict, please click here. 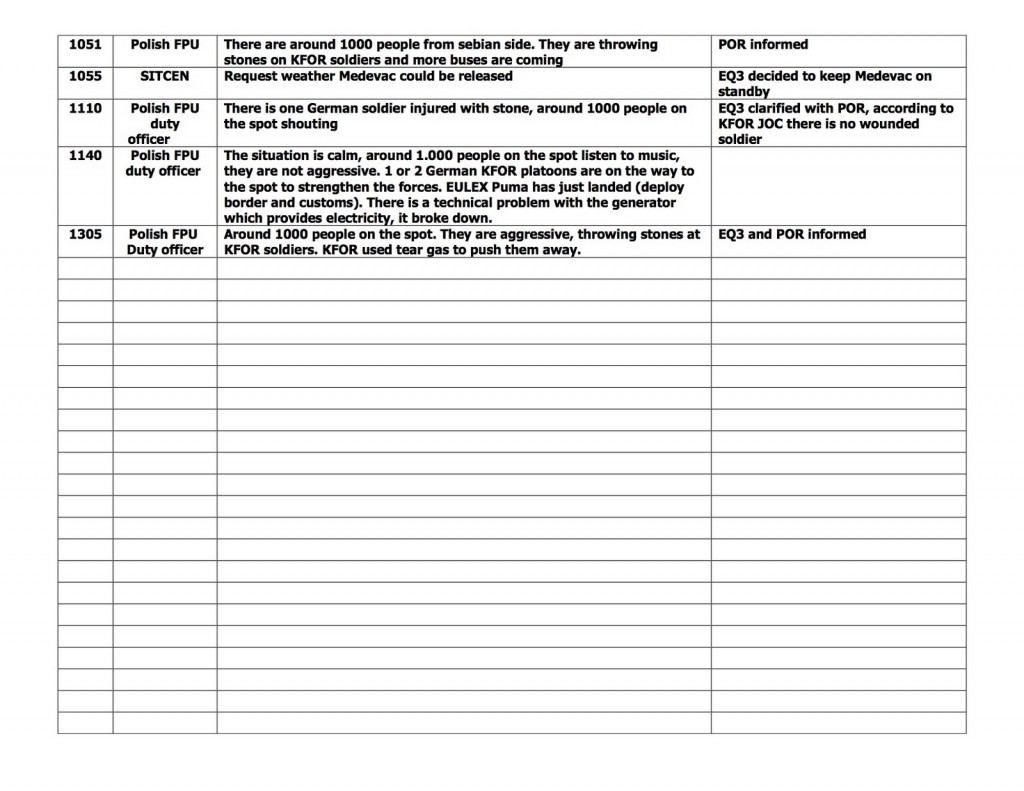