According to the verdicts of the Hague Tribunal, this year marks the twenty-first anniversary of the ethnic cleansing of Prijedor’s non-Serb population. However, as the case of Prijedor’s memorial culture shows, a culture of denial continues to shape the past, present and future memories of the crimes against humanity committed.

Today, twenty-one years after serious crimes were committed in Prijedor, the rights of the victims remain largely denied through the use of uncommonly profound forms of political and cultural strategies of denial. Such strategies revolve around an official collective memory and narrative of the so-called “Serbian defensive-liberation war” in Prijedor during the nineties, and are most visible through the memorial culture of monuments and its associated propaganda.

The official narrative of the monuments contains inscriptions such as “the soldiers who died in the homeland war, 1991-1995. They courageously used their chance to die” (in Orlovci, Prijedor), they “courageously died for the fatherland of Republika Srpska” (the standard inscription), or they were killed by “Muslim extremists in the war of defence and liberation“ (Djapa Radenko monument).

A culture of denial of ethnic cleansing through the memorial culture of monuments continues to unfold – in terms of numbers, the spatial narratives of the monuments and the indifferent attitude of Prijedor’s citizens toward these issues.

Despite an already grim reality regarding the lack of memorization of non-Serb victims, the local government in Prijedor does not allow the construction of monuments for non-Serb victims in those areas where concentration camps were located (namely, Omarska and Trnopolje), due to various forms of institutional political manipulation that allegedly “provoke inter-ethnic hatred” or “legal manipulation”, such as “at the state level,where there must be a minimum consensus on this [the monuments]”.

To date, there is no law on monuments for the victims of war crimes in Bosnia-Herzegovina, nor any law against the denial of genocide and crimes against humanity. Adopting these laws at the state level has been obstructed by politicians from the Republika Srpska (RS), particularly the SNSD (the Union of Independent Social Democrats). According to independent media, these laws were opposed because RS politicians deem them as both a threat to the Entity’s survival and a chance for personal opportunism.

Referring to the monuments in Prijedor, Marijana Toma, an expert in transitional justice, argues that it is important to legally regulate these issues at the state-level so that, on the one hand, the denial of war crimes can be hindered by using monuments as a form of propaganda, and, on the other, “to prevent the manipulation of facts”. It is also essential for allowing an adequate representation of the truth through monuments – a crucial factor in dealing with the past and promoting reconciliation. Many transitional justice experts agree with her assertions.

The most controversial monument – one which stands as a denial of crimes committed – was erected on the site of the former concentration camp, Trnopolje, by the local government. “The monument for all Serb soldiers who were killed” was raised in 1999, like most of other monuments for Serb soldiers in Prijedor. Satko Mujagic, a former prisoner in Omarska camp twice wrote a public letter (Pismo bez odgovora) – in 2004 and 2009 – to the mayors of Prijedor, calling for “the monument to be removed” or that they “erect a collective monument that would symbolize reconciliation”. However, victim’s appeals continue to be ignored due to the prevailing attitude of denial propagated by the political elites and citizens. As a result, the victims feel humiliated and intimidated. 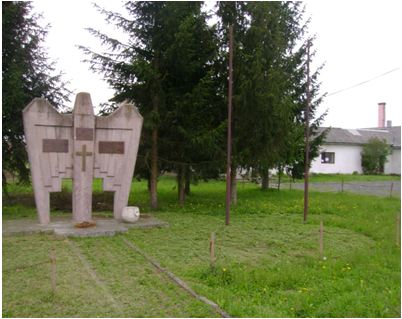 The monument for all Serbian soldiers erected in the area of ex-Trnopolje camp. Photo by Haris Subašić.

No memorial to the victims of the former concentration camp, Omarska, has been erected as yet. According to the mayor, Marko Pavic, a memorial complex in Omarska will disrupt inter-ethnic relations. Furthermore, the victims do not have the right to visit the sites of the crimes committed whenever they wish, being only granted access on the day of commemoration.

According to evidence from the non-Serb victim association, ‘Izvor’, the total number of killed and missing people from Prijedor municipality totals 3,177 (3,015 Bosniaks, 138 Croats, 12 Albanians, 8 Roma, 1 Czech, 1 Pakistani, 1 Serb, 1 Ukrainian). Of this number, an estimated 2,078 people were killed and around 1,099 are still considered missing. Around 31,000 were detained in concentration camps, and 53,000 were deported from Prijedor.

The indisputable historical record of  the Hague Tribunal affirmed that ethnic cleansing against non-Serb civilians – mainly Bosniaks and Croats – occurred in and around the Prijedor area in the nineties; led by local Bosnian Serb political, police and other forces with the aim to create a pure Serb state. To date, these findings are interpreted differently in Prijedor.

Of 27 individuals prosecuted by the Hague, 13 were found guilty of mass killings, detention in concentration camps (Omarska, Trnopolje and Keraterm), rape, deportation, torture, destruction of cultural and religious heritage, and robbery of non-Serbs that occurred in Prijedor, primarily in 1992. Amongst those convicted of crimes against humanity in Prijedor area were Milomir Stakic, Darko Mrdja, Biljana Plavsic and Zoran Zigic, to name but a few.

Neither the respective mayors, political elites or citizens have as yet issued any public apology for the crimes committed in Prijedor. Furthermore, they refuse to participate in meetings organised with the aim of  working towards reconciliation, fail to provide full support to the ongoing search for missing persons and refuse to take part in camp commemorations.

Such denial of the fact-based truth established by the Hague Tribunal about the crimes committed in Prijedor – particularly through the memorial culture of monuments and moral responsibility – serves to legitimize war crimes and results in further injustices for the victims, both legal and moral. Furthermore, it sets the foundations for potential future conflicts, whilst leaving the process of reconciliation facing certain failure.

Haris Subašić is currently a PhD student in Human Rights at Hacettepe Üniversitesi (Turkey). Haris previously worked as a research assistant at King’s College London on a project entitled, “Pictures of Peace and Justice Documentation, Evidence and Impact of Visual Material in International War Crimes Prosecution”.