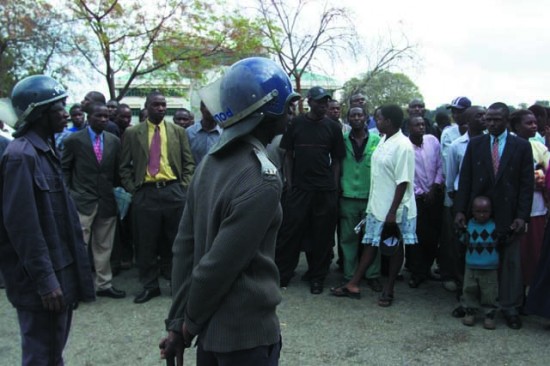 The history of violence and issues of political suppression is well known in Zimbabwe, but are these issues magnified through a process of emulation by the people?

The Zimbabwean political scene has always been dominated by a history of politically-motivated violence, dating back further than the disastrous 2008 presidential elections that left thousands of innocent civilians for dead. The violent clashes were between the then ruling political party, the Zimbabwe African National Union – Patriotic Front (Zanu- PF), led by President Robert Mugabe, and its major rival, The Movement for Democratic Change (MDC-T), led by current prime minister, Morgan Tsvangirai. Before the 2008 presidential election, Zimbabwe had witnessed a host of deadly violent clashes between its war veterans and Zimbabwean white commercial farmers over the issue of illegal land repossession.

Beginning in 2000, Zimbabwe’s land repossession initiative saw white farmers being forcefully-removed from their legally-owned farms by the Zimbabwean government in the guise of empowering the black majority of landless Zimbabweans.  Instead, the farms were channelled towards influential Zimbabwean government ministers and their immediate relations. Efforts to settle the land issue in a peaceful and amicable manner between the white Zimbabwean commercial farmers, with the aid of the Southern African Development Committee (SADC), and the Zimbabwean government,  fell on deaf ears as the Zanu- PF government continued to repossess the farms in a violent and military style that left many innocent people dead.

The Zimbabwean government later went on to implement ‘Murambatsvina‘, meaning ‘against all illegal squatter houses’, on the Zimbabwean black majority in urban cities such as Harare, Bulawayo, Gweru and Kwekwe, through police intimidation tactics. However, the plight of these ordinary Zimbabwean civilians was never publicised, as the police, at the behest of the Zanu- PF, forced themselves into people’s properties. These citizens were then beaten-up mercilessly and coerced into destroying all existing shelters that were unapproved by local government councils.

With Zimbabwe’s forthcoming 2013 presidential elections approaching, violence has already begun to take hold. Despite there being a Government of National Unity formed in 2009, the intimidation of ordinary civilians by police occurs often, and prevents citizens from attending political rallies of rival political parties.

The behaviour at the state level is seemingly reflected at the level of the civilians, where we see the same violent tendencies exhibited by many Zimbabwean youths towards each other.

A demonstrable and very public anecdote of this violence can be found even on mainstream television, such as the incident witnessed on season 7 of the Big Brother Africa reality show, which was held last year 2012 in South Africa. The altercation involved two Zimbabwean representatives that took to blows following a series of arguments to the surprise of their fellow housemates.

Instead of the two Zimbabweans, Maneta and Rocki, rallying and supporting each other, they used the platform to constantly argue and involve themselves in violent outbursts The pair showed signs of hostility towards one another from day one of the show, despite being there for the same patriotic cause.

The essence of the matter here is that, for many Zimbabwean youths, the hostility and violence displayed by the state has become engrained at the citizen level; reflected in day-to-day exchanges between the people. The violence that the Zimbabwean contestants Maneta and Rocki exhibited appear to be symptoms of this state violence, for if children grow up in an environment where political leaders resort to the use of violence to settle conflicts and disputes, we must expect that their peers will emulate these violent tendencies.

If leaders such as President Mugabe and others of a similar vein could foster peaceful notions of settling disputes and disagreements, even at times when their opponents resort to violent tactics, it may be possible to engender a peace driven generation that can lead by example and pave the way for years to come.

Otto Mponda is an independently published researcher within the areas of political discourse, gender equality as well as women empowerment.