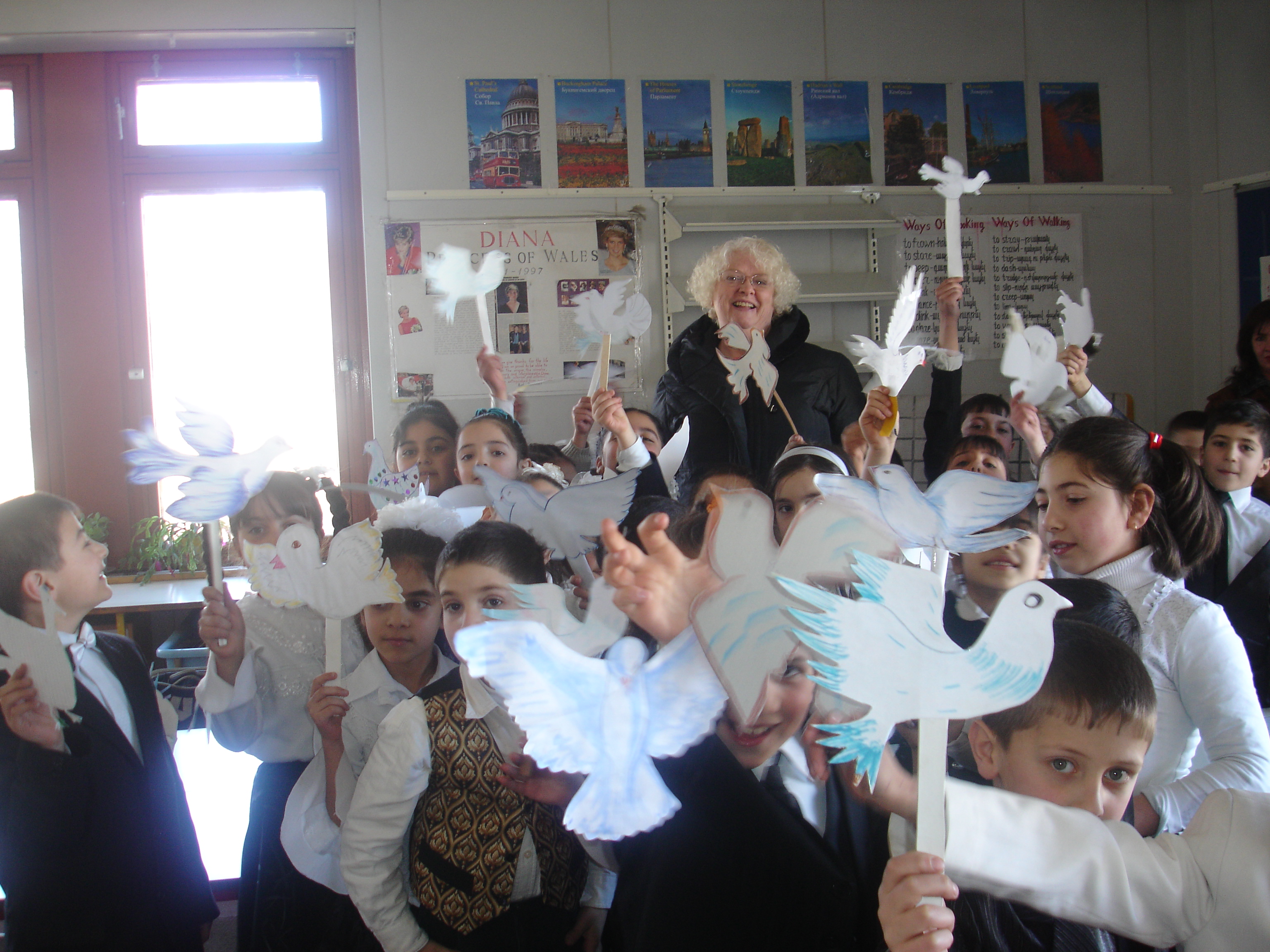 While incorporating conflict resolution concepts into education is blossoming, now is the perfect time to extend this type of education to all corners of the world, especially for youth in troubled areas. We can start by promoting these ideas to educators and administrators in our communities. This is an exciting time for young people in the world as the UN is putting youth at the forefront of its agenda.

If we avoid teaching youth how to resolve and prevent conflict, we can only expect a future filled with more conflict. It is a simple determination. Widely accepted theories postulate that there exists a link between deficient education and increased violence, and poverty. In addition, most people lack awareness of conflict transformation, ADR, arbitration, mediation, or other methods that can help promote peace. Individuals remain ill equipped to confront conflict unless they obtain proper training and education. It leaves us wondering the question we should have been asking a long time ago: why are we not teaching conflict transformation in schools? A hesitation to teach conflict resolution may arise from thinking the precepts are too complex for young people to understand. Perhaps some believe they are only applicable for political enthusiasts and not youth. There may also be an insufficient awareness of these topics among educators.

As any teacher can tell you, schools are a breeding ground for conflict. While school drama may be different than civic and political turmoil, I have found that the principles associated with conflict resolution can be beneficial when applied to both. Teaching youth to practice conflict resolution and peacebuilding techniques in their smaller communities now can prepare them to later utilize these skills as they become involved in a rapidly globalizing world.

I had the opportunity to create innovative curriculum for a class titled, “Global Studies Through Conflict Resolution.” I was disappointed to find very little information available that aimed to teach young people about conflict resolution, peacebuilding, and peacekeeping. This did not stop me from gathering information, and adapting it to a level of understanding for youth ages 16 to 18.

In Global Studies Through Conflict Resolution, students not only learn history, they explore the historical events that are linked to various conflicts in the world. After investigating a particular region, at the end of each unit they sit around a discussion table to hold “peace talks” and create roadmaps for peace, or points for peace treaties.

I was amazed to see how students’ ideas developed throughout the year. I remember after the first unit, I posed the question I always ask, “What could be done to help resolve this conflict?” After a couple seconds they offered the best answers their teenage minds had at the time. “Why don’t we just bomb them?” one student suggested. “Someone should assassinate their leader,” thought another. At this point we started analyzing how conflict is perpetuated, what doesn’t work, and why. We spent time learning about what organizations such as the UN, various NGO’s, and TransConflict have done, and what suggestions they offer,to mediate, resolve, and transform conflict. As the year went on, the student responses became more sophisticated. Rather than bombs and war,they began to think of other means for resolving conflict such as teaching empathy and alternative dispute resolution. “We should start an organization that teaches women valuable work skills. Educate women and girls to help poverty decrease,” one student offered. Another creative idea was, “Maybe we could start a sports program for teenagers there.”

At the Center for Strategic and International Studies, the UN Secretary General’s Envoy for Youth, Ahmad Alhendawi said, “I understand very well that education will lead to political maturity as well, and people will start demanding participation. They demand the institution to be more open for their participation.” He went on to relay his experiences living in Egypt during the revolution and seeing the protests in Tahrir Square, where thousands of young people took to the streets to have their voices heard. Mr. Alhendawi believes that sometimes “…policy makers and institutions fail to listen to young people.” Two months before the demonstrations, he heard that only 4% of young Egyptians engaged in political activism. However, when young adults found a way to organize and have their voices heard, they seemed to be vehemently willing to make sacrifices in demanding their rights.(1)

From my experience as an educator, young people are eager and enthusiastic to involve themselves in civics and political issues. The problem for my students was certainly not a lack of interest, but rather, a lack of obtaining the communication and education necessary for them to understand the core issues. Political material is typically written above the understanding of many youth, causing them to shy away from involvement. When they are able to access information in a way that reaches their level of comprehension, it seems to open a new world of understanding for them, which they are often ecstatic to be part of. Once they have someone to teach them the essential vocabulary and concepts, they will cultivate the zeal necessary to keep themselves abreast of current events, and become globally concerned citizens.

Another benefit of the new Global Studies curriculum was using conflict resolution techniques and applying them to real problems that the students were experiencing in their lives with their friends or families. This helped them develop critical reasoning, empathy, diplomacy, and mediation skills that will better equip them for any future endeavour. It also allowed them to connect with history and politics on a more personal, emotional level, making them enthusiastic about researching the topics.Implementing these themes into public education is an emerging practice. Organizations such as EUROCLIO are working to redesign history education to eliminate biased thinking and promote acceptance.(2) This is vitally important, since historical perspectives can influence how individuals engage in conflicts.  As Dr. Chad Ford, who worked in Northern Ireland, explained, “In hours of negotiations and discussions, members of the IRA negotiated ancient history as if it were today’s headlines. The injuries of the ancient past were still very much at the forefront of the present.”(3) The goal in revamping history education is of course, not to nullify portions of history, but to transform the way youth analyze and contemplate past events that are difficult to confront.

Debate has long been a popular aspect of education where history and politics are involved. Students analyze two sides of an argument and work to demonstrate superior thinking over their opponent. While debate is obviously important and has its place, in Global Studies Through Conflict Resolution, rather than engaging in these types of debates, our youth come together to analyze all viewpoints of a conflict. We delve into psychology to understand why enemies think  differently. Students then model negotiations by acting as if they were political leaders and third party mediators to find points of compromise and agreement.

One of the fascinating things about teenagers and young adults –who are often the ones to engage in civil conflict – is that the prefrontal cortex (PFC) of their brains does not fully develop until they reach an age of approximately 25.(4) The PFC helps us manage our impulsivity, decision-making, and even our ability to empathize with others and understand their perspectives.(5) This age group’s developing PFC may be one reason why youth seem to be more impressionable. It is also why learning conflict resolution should happen at a young age, when having training on how to effectively deal with conflict is perhaps most essential. Research shows that even short and simple positive exposures to other cultural groups can reduce biases and stereotypes.(6)

If educators can structure this type of purposeful exposure in schools, they will hopefully begin to outweigh external perpetuation of negative prejudices, and teach students empathy. While incorporating conflict resolution concepts into education is blossoming, now is the perfect time to extend this type of education to all corners of the world, especially for youth in troubled areas. We can start by promoting these ideas to educators and administrators in our communities. This is an exciting time for young people in the world as the UN is putting youth at the forefront of its agenda. As Ahmad Alhendawi explained, the UN has “…a new momentum for youth development.” They are working on helping youth in progressing and “…becoming opportunities.”(1) Adopting new models of education for our youth is one important step in that process.

Heidi Green teaches Global Studies Through Conflict Resolution at Assets High School. She also facilitates seminars for students in the Intercultural Peace-building program at Brigham Young University Hawaii. She will soon begin an MA in Global Diplomacy through CISD – SOAS, University of London. She recently presented a TED talk on teaching Empathy and Conflict Resolution at TEDxHonoluluEd.