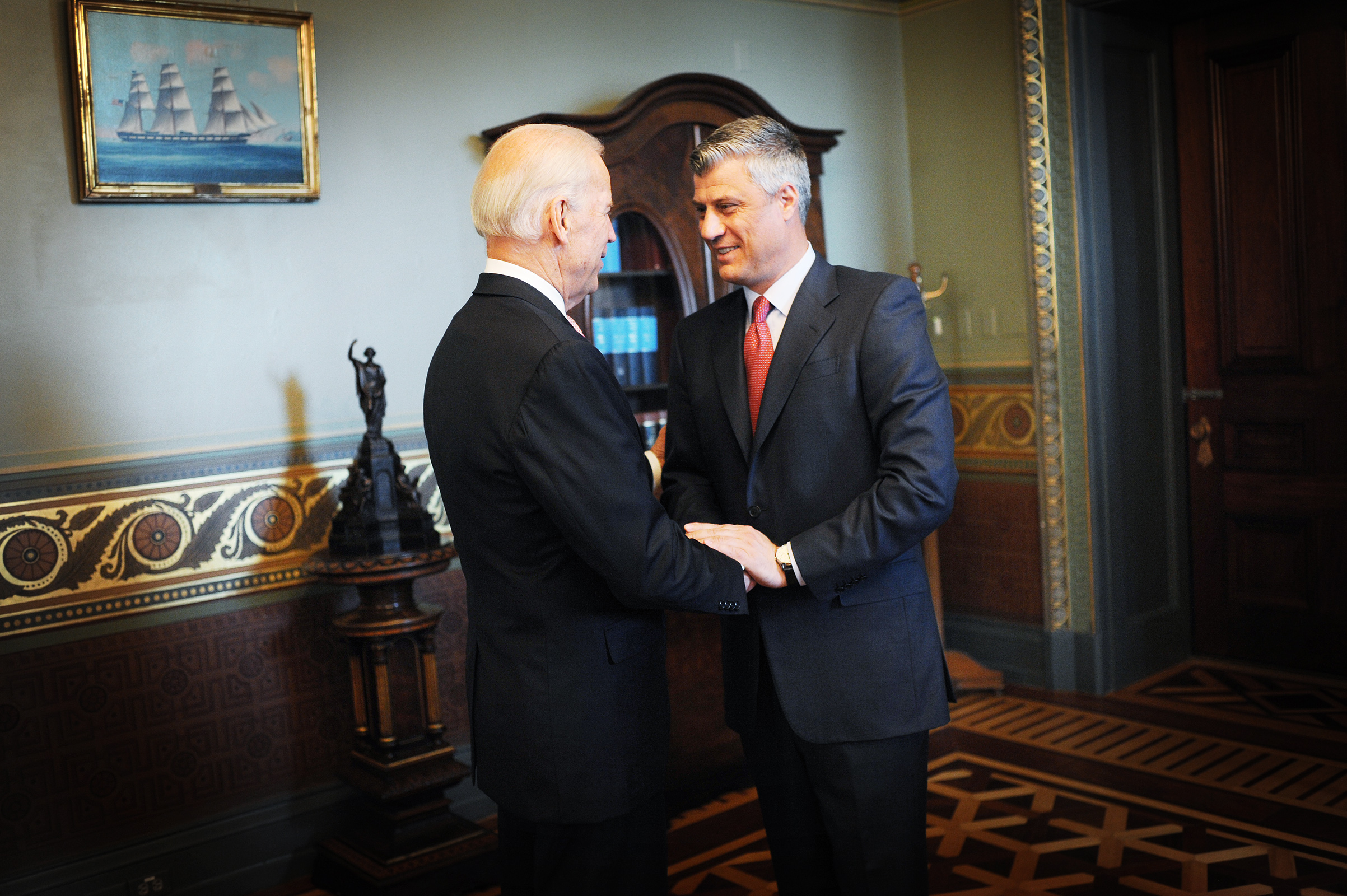 Reactions of Kosovo’s political elite to recent arrests of several high officials by EULEX raise a question as to whether it will be possible to truly ‘normalise’ interethnic relations while there is such unwillingness from either Kosovo’s political establishment or its most influential advisor to seriously address the issue of transitional justice.

Kosovo Prime Minister Hashim Thaçi was warmly received during his recent visit to the US. At a ceremony to mark the twinning of Kosovo and Iowa as ‘Sister States’, Governor Terry Branstad declared that ‘we think it’s a wonderful opportunity for Iowa to build a longstanding relationship with this new country that is a wonderful friend of the US’. Iowa Guard Col. Gregory Hapgood additionally highlighted the military bond between Kosovo and Iowa and illuminated the continuing influence of ex-KLA fighters in Kosovo’s political establishment when he remarked that ‘these are our equivalent of patriots… they fought for independence’. US Vice President Joe Biden’s admiration for Thaçi was even more glowing when he proclaimed that ‘your maturity and leadership to overcome ethnic divisions and hostilities from the bitter past is highly appreciated by the USA’. Such high praise is not surprising given the close relationship that Kosovo (and particularly Hashim Thaçi) enjoys with the US (indeed Joe Biden referred to Thaçi in 2010 as ‘Kosovo’s George Washington’), despite Thaçi himself being at the centre of some serious allegations involving war crimes (most notably detailed in Council of Europe Rapporteur Dick Marty’s report on organ trafficking).

While US praise for Hashim Thaçi’s leadership generally may not be surprising, the timing of these particular comments is noteworthy. Biden’s tribute to Thaçi’s service to ethnic reconciliation in Kosovo came on the same day that it was announced that six more ex-KLA members of the Drenica Operations Zone of KLA were suspected by EULEX of committing war crimes. This list included high-profile politicians and fellow members of Thaçi’s Democratic Party of Kosovo Nexhat Demaku, mayor of Gllogoc, and his brother, MP Fadil Demaku. Two weeks earlier, nine more high-profile ex-fighters with close links to PM Thaçi from the same ‘Drenica Group’ were detained by EULEX, including Sylejman Selimi, Kosovo’s ambassador to Tirana, and Skenderaj mayor Sami Lushtaku.

What is more striking than the high-profile positions these suspects occupy in Kosovo’s political establishment is the reaction of the ruling PDK to the arrests. Far from pledging support to the justice system, public comments from the country’s most powerful individuals have been universally damning of EULEX’s actions, which are largely seen as an attack by EULEX on the Kosovar-Albanian population as a whole. A PDK statement asserted that the allegations would not help the justice process and general situation and that they undermine ‘cooperative relations built with hard work between Kosovo and the international community.’ Assembly Speaker Jakup Krasniqi similarly saw the arrests as an indictment of the Kosovar-Albanian community as a whole rather than the pursuit of justice for individual crimes committed by individuals. Krasniqi proclaimed that ‘I think that with these actions, EULEX is proving it is not neutral… it’s like EULEX wants to say that Albanians caused and were responsible for the war in Kosovo’. More alarmingly, Foreign Minister Enver Hoxhaj was accused by the Appeals Court of intimidation of judges and prosecutors and political interference in the court of justice after he made a statement in the assembly against the criminal prosecution of former KLA members and came out in support of Ambassador Sylejman Selimi. Similar blanket support for ex-KLA members facing war crimes allegations was given by Thaçi himself in November 2012 in response to the detainment of former Transport Minister and PDK member Fatmir Limaj. At that time Thaçi declared that ‘no-one has the right to stain our rightful war and victorious war and our freedom fighters, no one can and does not have the right, not even EULEX in the middle of the night, secretly and behind the back of Kosovo’s institutions to arrest the fighters of the Republic of Kosovo.’ PDK reactions reflect similar attitudes in the wider Kosovar-Albanian population. After the arrests were announced, KLA veterans associations organised mass protests that were attended by thousands.

The reactions to these arrests by Kosovo’s political elite highlight the fact that, on the eve of the 14th anniversary of the end of the war, there is still very little willingness to accept the possibility that war crimes were committed by members of the KLA. This blinkered attitude highlights the importance of strong leadership on transitional justice from the international community, an issue which is still regarded as one of the most important matters facing post-war Kosovo. Amnesty International published a report in 2012 urging EULEX to prioritise war crimes and warned that ‘impunity persists for war crimes committed by both sides of the 1999 armed conflict’ and that impunity for war crimes was one of the most serious human rights concerns facing the region. It is therefore striking that far from being critical of the PDK’s condemnation of these arrests, the US Vice-President publicly praised Hashim Thaçi for his ‘leadership to overcome ethnic divisions and hostilities from the bitter past’. Although an earlier statement released by the US Embassy in Pristina generally condemned the political reactions to the arrests and warned that ‘violence and threats against judicial officials go against all Kosovo’s values and are not acceptable in a democracy’, this somewhat weak message was overshadowed by Biden’s comments, which received substantial media attention in both Kosovo and the US. Vice-President Joe Biden’s comments send a very public message that Kosovo’s political establishment can actively condemn investigations into war crimes and still be received in the US as war heroes.

This episode raises questions about whether transitional justice and interethnic reconciliation lie in the US’s priority list for Kosovo, especially as the US has proven itself to be the one country that has the most leverage over Kosovo’s political landscape. Perhaps since the signing of the agreement for the normalising of relations between Kosovo and Serbia there is little interest from the US in publicly focusing on less positive aspects of the international community’s legacy in Kosovo. The question remains as to whether it will be possible, regardless of any formal agreements, to truly ‘normalise’ interethnic relations while there is such unwillingness from either Kosovo’s political establishment or its most influential advisor to seriously address the issue of transitional justice.

Anita McKinna is an Australian academic researcher based in Cambridge. She has been researching issues related to Kosovo and the Balkans since the late 1990s. She completed her PhD on the international administration of Kosovo at the University of Melbourne, after having attained an MPhil on the post-war reconstruction of Kosovo from Cambridge University. She has published articles on the interaction of international administrators and local political actors in post-war Kosovo in several international academic journals.