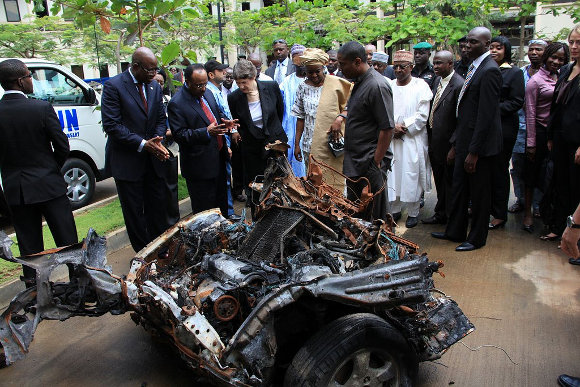 The Boko Haram conflict northern Nigeria has been mostly viewed in social, economic, and religious terms; however, the relationship between the politics of transitional justice and impunity can also offer important insights.

The violence perpetrated by Boko Haram in northern Nigeria has been mostly, but not consistently, couched in socio-economic and religious terms and such explanations are well documented. However, there is the need to extend the investigation by offering an alternative view that analyses the relationship between the politics of transitional justice, impunity and the Boko Haram conflict in north-eastern Nigeria.

The failure to implement a proper transitional justice mechanism could lead to impunity. Impunity has become a norm in Nigeria, leading to excessive forms of violent conflict and crimes. The hallmark of this is defined by the elite use of power in a dishonest or illegal way largely to take advantage among other competing interests. The significant character of Nigeria’s culture of impunity is inequality before the law and lack of accountability. To what extent can this sort of impunity produce violence, even in times of peace? And how did Nigeria arrive at this point?

A history of impunity in Nigeria

Investigations in some major cities of northern Nigeria suggest that the emergence and transformation of Boko Haram could be driven by the culture of impunity, an important issue neglected by the politics of transitional justice in Nigeria.

The need for reconciliation was evident when pre-independence tensions between south and north saw Abubakar Imam from the north declare:

we despise each other… to tell you the plain truth, the common people of the north put more confidence in the white man than in their black southern brothers.

This brand of animosity had two effects, first, it triggered ethnic politics, culminating in the July 1966 massacre, and signalled a major step in establishing the culture of impunity in Nigerian politics. The Nigerian civil war, and the military dictatorship made the need for a transitional justice mechanism inevitable in Nigeria and the failure to address them effectively intensified the culture of impunity.

Prior to the civil war, the southern Igbo ethnic group were already being referred to in northern Nigeria as kwaro; a tiny insect whose presence provokes the killing instinct in a person, reminiscent of the term cockroaches during the Rwandan genocide. Furthermore, due to government execution of the war, between one and three million people were estimated to have died, mostly from hostilities, planned starvation and disease. Obasanjo himself declared that ‘‘during the war we were accused of barbarism and genocide’’.

Observers argue that Gowon’s principle of no victor no vanquished, based on reconciliation, rehabilitation and reconstruction to end the war was largely unsuccessful because, firstly, Gowon’s authoritarian military regime was inexperienced in democratic governance and disinterested in a transitional justice approach.

In fact, influenced by authoritarian regime factors and buoyed by victory of the war, the military cemented its hold on power, institutionalized its values and blocked any form of investigations. Neither reconciliation nor prosecutions were achieved. Gowon and his cronies were more interested in wealth and declared oil and gas reserves as federal government property claiming that Nigeria is rich; the problem is how to spend the money.

Military dictatorship offered Nigeria another opportunity to seek national reconciliation and accountability. The country came under the worst form of repressive military regimes spearheaded by northern Generals; Buhari, Babangida and Abacha. Abuses under these regimes were defined by three military principles; coup plots, suspension of the country’s constitution and the grafting of military decrees on the nation’s justice system. Once these legal foundations have been established, the generals, like ancient tyrants, killed and terrorized at will.

Buhari ruled for less than 20 months, yet, his regime empowered security forces to kill and publicly flog opponents, detaining them without trial. General Babangida aggressively entrenched the patron-client culture favouring those of his ethnic stock.

On the other hand, Abacha using dictatorial strategies from Libya and North Korea unleashed a reign of terror and manufactured coups to repress opponents. Victims confessed that tortures sessions were followed by verbal insults like, ‘‘if you do not confess we will kill you and nothing will happen, for many have died and nothing happened’’. By the end of the military regime, thousands of people had been killed or disappeared, leaving Nigeria fragmented and on the brink of another civil war.

Obasanjo’s administration established a transitional justice mechanism in the form of a truth commission in 1999 with the mandate to help achieve accountability and reconciliation. Clearly, the mood at the end of military dictatorship was that of accountability and reconciliation. Television networks in Nigeria decided to broadcast the public sittings across the nation, millions of Nigerians stayed glued to their television sets in a manner that they had only done during international soccer matches.

Unfortunately the mockery of Obasanjo’s truth commission was best demonstrated by the fact that the government neither published nor implemented the recommendations. No approach to transitional justice in pursuit of reconciliation or accountability was considered.

The failure of transitional justice and the Boko Haram conflict

Opinions differ as to why this commission did not succeed. Whatever the reasons for this failure, the consequences were enormous for political contestation in Nigeria. It increased the north-south animosity and weakened accountability institutions. In addition, it destroyed the confidence of the people in the authority of the government to provide and to protect.

Ordinary Nigerians shifted their loyalty away from the state to ethnic and regional networks and informal resistance groups to protect community interests. Groups such as the Odudua People’s Congress the Movement for the Actualization of the Sovereign State of Biafraand the Ijaw Youth Council all became very strong during this period.

Interviews conducted in most cities of the north-eastern states indicate that the revolt by Boko Haram against impunity operates at three levels.

The first level is against the culture of impunity within the Nigerian security forces, including the judiciary. The image of security forces is tarnished by massive human rights violations. Hundreds of people are unlawfully killed while others are tortured to death with some disappearing from police custody. Few of the police officers are held accountable.

Furthermore, the judicial system is blighted by corruption and slow court processes. Detainees are kept in lengthy pre-trial detention in appalling conditions. For instance, Boko Haram leader Muhammad Yusuf was executed without trial. It is cases such as these that made Abu Kakah, Boko Haram’s spokesman, to declare that their target is to retaliate against the arrest and victimization of innocent civilians by security forces and to uproot the culture of impunity within the government.

The second level of revolt is directed against what is termed as the culture of impunity within government circles. The return to multiparty democracy produced a new generation of political leaders in the north-east; Senator Ali Modu Sheriff of Borno, Atiku Abubakar of Adamawa, Isa Yuguda of Bauchi State. The privileges conferred by access to state machinery and control of funds substantially eroded the power previously enjoyed by traditional rulers, as allegiance was now shifted to politicians. This added to the layers of bureaucracy that ordinary people had to confront in terms of bribes, sleaze of public funds and access to men in power.

Furthermore, it increased the level of impunity in a deep seated patrimonial political culture and created the impression that politics remains the only valid avenue for upward social mobility. An interview with Alhaji Baba Shehu, the influential secretary of the most active Dapchi youth association in Damaturu, Yobe state, confirmed that a lot of the young people are simply revolting against the impunity with which political leaders administer the region.

Reports indicate that Boko Haram and its sympathizers accuse the government of engaging in the legacies of nepotism and enriching family members and close associates instead of investing in the development of north-eastern Nigeria. Boko Haram perpetrators are disenchanted, if not furious, with the north-eastern political leadership, a leadership, which they argue, calls itself Muslim yet continue to do things that are forbidden in Islam. In July 2009, shortly before his death, Yusuf claimed that:

In the north, they are able to perpetrate the violence because they thrive in lawlessness of a weak state promoted by the political culture of impunity. They are aware of how much the political class and the security forces could be influenced to bend the law. As earlier indicated politicians hire local militias and manipulate national, state or local political systems in support of their interests. There are allegations of connivance between security forces and the Boko Haram engaging in illegal activities. For example, reports suggest the robbing of at least 30 banks by Boko Haram members with police officers implicated in the loot.

Although, reports like these are difficult to verify, they indicate the Boko Haram and its sympathizers are conscious of the deformity in state’s civil and judicial institutions.

Sadly, the indication of criminal collaboration between the members of the police force and the perpetrators of violence paints a tragic picture of the level of impunity that emboldens Boko Haram and their ability to exploit the weaknesses a deformed rule of law culture.

The Nigerian government’s military solution to the Boko Haram conflict is counter-productive. It targets individuals without addressing the structural conditions that have given rise to these resistance movements. It is therefore imperative that the Nigerian government focus on corruption and impunity, whilst strengthening accountability institutions.

Atta Barkindo is a Researcher and a current Ph.D. Candidate at the Department of Politics and International Studies, School of Oriental and African Studies, University of London.