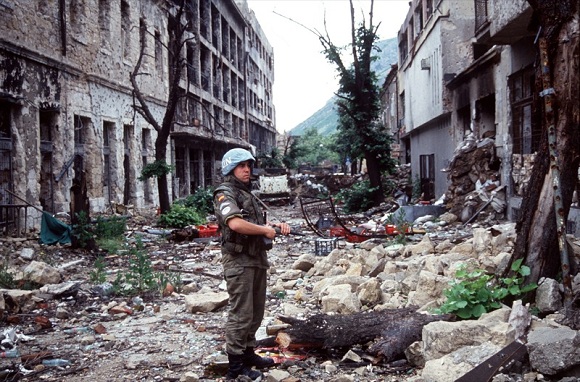 Although the establishment of the International Criminal Tribunal for former Yugoslavia (ICTY) has allowed bringing before the courts those responsible of war crimes, the tribunal has failed to address the most important issue for the future of the country: truth, justice and reparation for all victims.

The direct victims of a crime are not the only victims in a conflict. In the former Yugoslavia, particularly in Bosnia and Herzegovina, we are all victims. The war ended two decades ago, but the past hinders our future and shackles us.

In 1993 the UN established the International Criminal Tribunal for the former Yugoslavia (ICTY), a court of law dealing with war crimes committed during the Balkans war in the 1990s. But to what extent has the ICTY helped Bosnia and Herzegovina come to terms with its history?

I do not think the ICTY is a perfect tribunal and that everything they have done has been positive. That is not to say that I think the world would be a better place without it either. If the tribunal had not been established, it would be very difficult for us to face our past and to see all the political, military, and civilian leaders brought before the court to face responsibility for their actions.

It is important to bear in mind that the ICTY started from scratch. As Carla del Ponte, the former chief prosecutor for the ICTY, says it is a tribunal which many wanted never to come into existence. Also, it must be acknowledged that it has laid the foundations for the establishment of other courts and tribunals by setting a precedent in international humanitarian law.

Trials alone are not enough

Bosnia and Herzegovina, just like any other country in the world where people are suffering similar or worse situations, needs courts. Yet, the work of the ICTY over the past 20 years shows that courts alone are not sufficient because they do not provide victims with redress and reparation. Trials will not build memorial monuments and courts will not identify every victim. The ICTY deal with every case brought to it, but not with all potential cases. According to the Criminal Procedure Code of Bosnia and Herzegovina, the courts are not set to establish the truth but rather just to determine the criminal liability of an individual.

In Bosnia and Herzegovina there are some serious flaws that need to be addressed in order to have fair trials for everyone, justice for victims and truth for society. First of all, there is not a sound statutory framework for the courts’ work. It is a chaotic situation as the Court of Bosnia and Herzegovina operates under one code and the entity-level system under another. This undermines the social effort to establish the accountability of everyone involved. Secondly, everyone brought before the court must have the right to fair trial regardless of what they are suspected of having done.

Another important issue is that regarding the efficacy of the punitive policies. A prison sentence alone is an inadequate sanction for someone who has killed whole families, raped women and taken part in atrocities. Increasing jail terms, though, would not achieve much. Regardless of the length of the jail sentence, it will feel inadequate if the victim is left unrecognised.

Victims’ rights are yet to be recognised

One of the main shortcomings of the ICTY and the national courts is that victims are marginalised. War crimes are recognised as such because of the victims, who discuss what happened and who is to be held responsible. Yet, 90 per cent of the 400 articles of the Criminal Procedure Code of Bosnia and Herzegovina refer to the perpetrator and their rights instead of those of the victim. The perpetrator has the right to the presumption of innocence, to a fair trial, to defence, to communication, etc.

Victims though are mentioned only in terms of property claims. But how many property claims have been brought to a conclusion and led to an actual redress? The focus should be on the victims, because the victims and their suffering are the reason why we have war crimes trials.

Without truth and justice for all victims, we will see no progress. But how can truth be established? Over the past ten to fifteen years, it has become quite clear that trials are insufficient. Although they help determine part of the truth and identify perpetrators and victims, trials do not lead to things such as reparation, institutional reforms, vetting of officials, school lessons, history books, and rehabilitation of the victims.

I hope that Bosnia and Herzegovina as a nation will in future recognise the importance of other mechanisms and activities that deal with the past, often referred to as transitional justice. All Bosnian citizens, regardless of their ethnicity and religion, need to find satisfaction, redress, and reparation for what they have suffered. Without that, their future is uncertain.

I do not think that it is possible to guarantee real justice in this world. A grieving mother or people who suffered in detention camps cannot be adequately compensated for their loss and suffering. Yet, the ICTY has done its share of work. If we did not have this imperfect mechanism, then all those who commit the crimes would gloat over their victims.

But now we need to move forward. In the future the UN and all those who establish courts elsewhere should critically look at ICTY’s work, taking what is best but addressing its faults.

Dr. Goran Šimić is an expert in the field of criminal law and transitional justice, professor, lecturer, writer, fighter for human rights and the rights of victims.