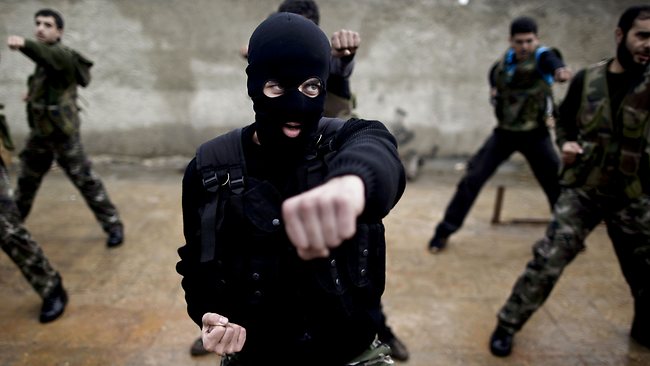 Even though conservative Islam is not much appreciated among the liberal and secular Bosniak and Albanian communities in the Western Balkans, radical groups show an increasing online and real-life presence.

To read other articles on Confronting Extremism, please click here.

The alleged popular uprising in Syria has quickly turned into a predominantly religious conflict, if it had ever been anything else. Syria’s president, Bashar el Assad, belongs to the minority Alawi community, an off-shoot of Shia branch of Islam, representing roughly 12% of Syrian population. With Sunni Arabs a vast majority in Syria, their dissatisfaction partly derives from the fact that power rests with a rival, minority group. Assad’s regime is supported by Russia and the extremist Shia organization, Hezbollah, funded and run by Iran’s government and secret service. The ‘rebels’, meanwhile, receive generous support from neighbouring Arab states, and are thought to be supported by the USA, Turkey and a majority of EU countries.

The belief that religious, as opposed to ethnic, affiliation is much stronger amongst Muslims deserves consideration. Rough estimates suggest that there might be over one thousand European jihadists fighting with the rebels in Syria. In many respects, the biggest security threat is not what they’re doing there, but what they might be capable of doing once they’re back.  In Holland, for instance, the national terrorism threat level has recently been raised to substantial, given that around one hundred Dutch nationals are currently in Syria, whilst a dozen who have already returned are now subject to government surveillance. Most of these young people have been mobilized and radicalized through the Internet, where a narrative for jihad has incited young people to join the fight. The BBC’s Paul Wood went so far as to insist that “this feels like the first YouTube war”.

With respect to the Balkans, media outlets suggest that around 300 local Islamists went to fight for the Sunni cause in Syria, primarily from Bosnia and Herzegovina, Albania, Macedonia and Serbia (from its Southwestern part, called ‘Raska oblast’ by Serbs, and ‘Sandzak’ by Bosniaks). Two Serbian citizens – Eldar Kundakovic from Novi Pazar and Adis Salihovic from Rozaje – recently lost their lives. Fighting under the combat names of Abu Bera and Abu Merdia, they were shot during an attack on a prison controlled by government forces in. Another young man, Muaz Ahmeti – a 23-year old student of the Islamic Cairo University, from Veliki Trnovac in the municipality of Bujanovac – was killed in Syria in May. The death of Naman Demoli from Pristina last year, meanwhile, figured prominently in the Kosovo media.

The Muslim community in Serbia is deeply-divided, with two Islamic Communities operating – the Belgrade-based Islamic Community of Serbia, and the Novi Pazar-based Islamic Community in Serbia.  Whilst both official meshihats condemn the practice of sending volunteers to Syria, some radical imams, small Salafist communities and affiliated NGOs are understood to have provided both rhetorical and logistical support, including organizing travel to Syria. However, in the light of growing outrage of the global Sunni community, particularly after the recent speech of the spiritual leader of the worldwide Muslim Brotherhood, Qatari-based Yusuf Al-Qaradawi, who called Hezbollah (an organization he once endorsed, despite being condemned by conservative Saudi clerics) the “servants of Satan”, seems that even some moderate Islamists are willing to support it. Even though the Belgrade-based ‘Pravda’ newspaper quoted ef. Resad Plojovic – the deputy of Novi Pazar Mufti, Muamer Zukorlic – accusing the extremist factions, in the interview given to Sandzak Press. Plojovic said that his words were taken out of context, and that if anyone wants to help the “good cause” in Syria, no one should stop them.

In neighbouring Bosnia and Herzegovina, where Salafists and Mujjahadins were settled in several locations after the tragic war of the nineties, the situation is even more alarming. According to various sources, some 52 volunteers left Bosnia and joined the Al Nusrah front, widely-recognized as Al Qaida associates. The media recently reported that their recruitment was organized by the extremist leader of the Salafi community in the village of Gornja Maoca in northern Bosnia, Nusret Imamovic, and Dzevad Golos, from Mostar, who runs the Daru-l-Quran Foundation for Kur’an studies.

On a conservative Bosniak Islam Iman’s website, Prof. Suljo Bahtic published an article called “Factors that have led to terrorism, violence and other deviations” in which he states that the terrorism and the call for jihad as a holy war is actually promoted and encouraged by the “western mentors”. Hence whilst the website also hosts news from Syria – such as ‘The most vulnerable victims of Syria conflict – children’, ‘Hezbollah – the devil’s party – its policy claims to discourage local religious community from joining the conflict. However, Islam Iman republishes translated articles from the International Union for Muslim Scholars (IUMS) website, whose latest statement calls for “the Muslim nation to fulfil their duty of defending their brothers and sisters in Syria who are fighting one of the fiercest battles today, and are subject to an organized extermination war, in cooperation with elitist, bloody, barbaric powers.”

The most active propaganda on the Syrian civil war can be seen on the Salafist website “Put Vjernika” (The Believer’s Path), whose extremely radical attitude is condemned by Islam Iman. Put Vjernika daily documents and celebrates all movements by the rebel forces, especially those by Al Qaida affiliated groups and foreign mujahids. The website contains many articles condemning secular practices of a majority of Bosniaks, as well as conspiracy theories against Jews, Shia Muslims (regarded to be pawns of the Crusaders), and, of course, Russia and Western states.

An interesting case is represented by the website of Dzemat Sabah, a small Bosniak Muslim community in three Danish towns of Ikast, Herning and Brande. Whilst the attack on the US Embassy by Mevlid Jasarevic is condemned as outrageous, such acts are commended in situations of war, wherever in the world it might be (though clearly referring to Syria). The website – which states that the work of the organization is supported by the embassy of Bosnia and Herzegovina in Denmark – also glorifies the life and ideology of the late Wahhabi leader, Jusuf Barcic.

Even though conservative Islam is not much appreciated among the liberal and secular Bosniak and Albanian communities in the Western Balkans, radical groups show an increasing online and real-life presence. Encouraged by financial support from Arab countries, and using the region’s constant economic and political crises, radical groups have become much more assertive, despite police surveillance and raids. Another factor contributing to the influx of Balkan Muslims is the extensive media coverage of Syria, echoing the nineties wars in Bosnia and Kosovo, in which Muslim Bosniaks and Albanians were represented as victims by the Western media, as it is currently the case with the rebels. The question posed by the Dutch media resonates – what will the veterans be capable of doing once they return?

Vladimir Ninković is a project officer for security at TransConflict Serbia.

This article is published as part of TransConflict’s project, Confronting Extremism, which aims to improve understanding about the concept of extremism itself, plus the groups and ideologies that manifest extremism in their aims, rhetoric and activities.

If you would like to contribute to the debate on Confronting Extremism, please do not hesitate to contact us with your ideas and suggestions by clicking here!