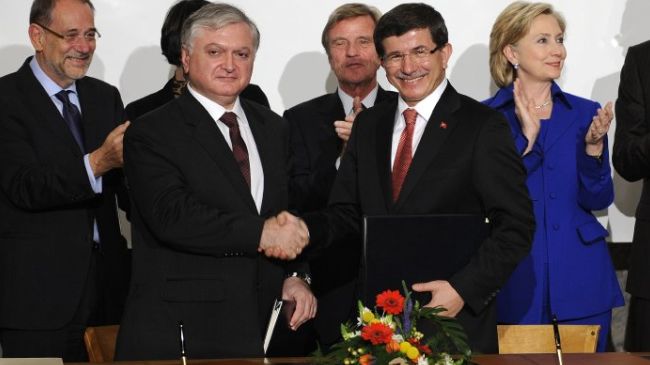 The Turkish-Armenian reconciliation process is now almost completely stalled, with Turkey continuing to vehemently oppose the Armenian-inspired international campaign to secure recognition of the Armenian genocide.

At the general assembly of parliament in Baku on 15th December, Ahmet Davutoglu, Turkey’s foreign minister stated that meetings held with Armenia are not a crime, but necessary politics. These statements came a few days after his first high-level visit to Armenia in nearly five years. The Armenian question – or what is called the ‘Armenian Genocide’ (1) – has for decades strained relations between Turkey and Armenia. With the one-hundredth anniversary of the Armenian Genocide taking place in 2015, some observers think it could provide a major breakthrough in genocide recognition and Armenian-Turkish dialogue. Others, however, insist that Turkey won’t recognize genocide, arguing that the killings were in self-defence against people who were disloyal to the Ottoman Empire during World War One (2). Turkey’s continued denial has created conditions which, particularly in the view of many Armenians, necessitates the continuation of the search for international reaffirmation until acknowledgement is universal and irreversible. In the meantime, the genocide issue continues to impact the normalization of relations between Turkey and Armenia.

The legacy of genocide

Relations between Turkey and Armenia are burdened by a number of inter-connected problems. Turks and Armenians have, for instance, disagreed about how to describe the Ottoman-era massacres committed against Armenians in the First World War (1914-1918).(3) During and immediately after World War One, the atrocities committed against the Armenians of the Ottoman Empire were public knowledge. In their May 24th 1915 joint declaration, the Allied Powers – Great Britain, France and Russia – accused the Young Turk regime of crimes against humanity and civilization. In 1919, the post-war Ottoman government prosecuted a number of Young Turk conspirators of the crimes of massacre and plunder. By signing the Treaty of Sèvres on August 10th 1920, Turkey obligated itself to apprehend those “responsible for the massacres.” The international community did not question at the time the veracity of the reports on the extermination of the Armenians.

The international community essentially abandoned the Armenians in 1923 when the European Powers agreed to the Treaty of Lausanne, in which Turkey was absolved of further responsibility. Turkey took license from this to embark upon a policy of denial, suppression of public discussion and prevention of any official mention of the treatment of Armenians. Europe’s determination to escape the horrors of World War One, isolationism in the US and revolutionary utopianism in Russia, further stigmatized the Armenian survivors as witnesses of a catastrophe politicians and the public wanted to quickly forget. World War Two, however, brought the problem of mass extermination into sharp relief, with the Holocaust reviving the sense of international obligation towards victimized peoples. As this sense of duty became embodied in a number of UN covenants, so Armenians began to find renewed hope that their case would receive attention. The 1948 Convention on the Prevention and Punishment of the Crime of Genocide attached a label to mass slaughter and a new word entered the post-war political vocabulary – genocide. With it came the realization among Armenians that they had been victims of a crime which at the time still lacked a name.(4)

To retrieve the memory of their forgotten genocide, Armenians initiated efforts for national and international recognition. These began with the introduction of commemorative resolutions in the United States Congress in 1975 and efforts to enter the subject on the record at the UN, which occurred with the 1985 adoption of a report on genocide by the UN Commission on Human Rights. Broader recognition was achieved in 1987 with the adoption of a resolution by the European Parliament, which stated that “the tragic events of 1915-1917…constitute genocide.” In the following years, the legislatures of countries such as Belgium, Canada, Cyprus, France, Greece and Russia adopted resolutions affirming the historical record on the Armenian Genocide. Acknowledgement also came through declarations by heads of states and pronouncements by legislators.(5)

For Turkey, it has never faced-up to the atrocities committed during the “dying” days of the Ottoman Empire. Alarmed by territorial claims and demands for reparations by Armenians, Turkey resented that its casualties and war-time conditions in eastern Anatolia as the Ottomans fought invaders on three fronts were not taken into account. To question the official line became a criminal offence and a taboo issue.(6)

Many who oppose official recognition of the genocide tend tacitly to admit that it did happen, but that it would be politically inconvenient to say so as this would anger Turkey – an increasingly powerful and influential country, an important NATO member and a strategic partner of the west (albeit one more than ever inclined to follow its own course). The implication is that it is still, ninety-five years later, too soon to face reality.(7)

The AKP’s approach to dealing with the Genocide Question

Since assuming power in November 2002, the Islamist Justice and Development Party (AKP) was preparing to start negotiations with the European Union. This path implied that Turkey should implement the EU’s conditionality principle to meet the criteria for starting accession talks; an important transformative force. The European course was instrumental in helping dispel fears of Turkey’s traditional elites for the country’s Westernization process and secular state identity under the AKP. The AKP government has realized that solely political and economic criteria are not enough to become a full member, consequently it began to invest in Turkey’s regional competencies. The South Caucasus was, for instance, one region in which Turkey could invest more, both politically and economically.

Genocide allegations and closed borders have played a big role in directing the course of Turkey-EU relations, with the European Commission’s annual progress reports prioritising establishing good relations and opening the border. In 2005, the European Parliament passed a non-binding resolution establishing Turkey’s recognition of the Armenian genocide as a requirement for membership.  Another factor is the European Neighbourhood Policy, which includes Armenia, with the EU calling on candidates to resolve difficulties with their neighbours before accession. The AKP therefore launched the opening of relations with Armenia as a means of removing this obstacle to EU integration.(8)

At this time, Turkey’s prime minister, Recep Tayyip Erdoğan, was much more open in his treatment of the Armenian issue. Whereas the Turkish state had always dictated historical narratives down to every school book, and treated scholars and journalists who thought differently as threats to national security, Erdoğan left history to historians. Erdoğan made statements asserting that it should be up to historians to determine the exact nature of what happened to Armenians in the Ottoman Empire during the First World War. He made sure that the rules governing access to Ottoman archives were eased, even though by now these are most likely cleansed of the most obviously damning documents, and the military archives are still not fully open. Rules governing the terminology used to describe these events were eased or applied less stringently. While this was partially due to internal processes, much of this openness can be explained by European requirements during Turkey’s negotiations for entry into the European Union.(9)

Negotiations between Turkey and Armenia – a win-lose situation?

On August 31st 2009, Turkey and Armenia announced the beginning of formal negotiations with the end goal of normalizing ties, with the presentation of two protocols – one on developing bilateral ties, and the other on establishing diplomatic relations. Through Swiss mediation, the signature of an agreement on to establish diplomatic relations in Zurich on October 10th 2009 offered hope that some of the difficult problems in the southern Caucasus may soon be resolved. The two countries agreed in principle to open the border , closed since 1993 because of the war between Armenia and Azerbaijan, a Turkish ally, resulting from the Nagorno-Karabakh dispute. Turkey had conditioned its reopening on a settlement between Armenia and Azerbaijan.(10)

Despite these efforts, however, the Turkish-Armenian reconciliation process is now almost completely stalled (15). Officially, Turkey continues to vehemently oppose the Armenian-inspired international campaign to secure recognition of the genocide. Ambassadors, consuls and other officials – as well as historians who support the official Turkish position, whether of ethnic Turkish origin or not – propagate the official Turkish position in as many forums as possible. Armenians believe that the AKP government is ready to blackmail – when it can – any government that moves towards recognizing the genocide. For the Armenians, therefore, it appears that the issue has not been left to historians after all. However, Gerard Libaridian, the Armenian historian, thinks that the Armenian issue is the blind spot of the Turkish leaders’ vision.(16)

On the level of Turkish elite and society, there is some sort of internal consensus that relations with Armenia should not be normalized at the expense of relations with Azerbaijan. Indeed, for the Turkish side, one of the most debated issues related to the protocols was the lack of any reference to Nagorno-Karabakh. Azerbaijan was determined not to support rapprochement between Turkey and Armenia as long as Nagorno-Karabakh remained unresolved.(17) It can be concluded that the protocols failed to achieve their objectives, even though the Armenian side did accept the constitution of a joint sub-commission of historians to discover the historical truth behind the genocide issue.(18)

Between Armenian demands for recognition and Turkish denial of genocide as an official state policy, both need to adopt a new approach to dealing with this debatable historical issue with all its complexities. For Turkey, it should take concrete steps in normalizing its bilateral relations with Armenia, on the one hand, and trying to reach a political compromise to the intractable genocide issue, on the other. Armenia, meanwhile, needs to show a considerable amount of positive encouragement towards resolving the problem by separating the normalization of relations with Turkey from the Nagorno-Karabakh peace process. Only through these mutual steps can the process of reconciliation between Turkey and Armenia be revitalised.

1) According to the definition of the 1948 Genocide Convention, genocide involves the intent to destroy – in a whole or in part – a national, ethical, racial or religious group as such. Genocide may manifest itself in killing members of the group, causing serious bodily or mental harm to its members, deliberately inflicting on the group conditions of life calculated to bring about its physical destruction in whole or in part, and forcibly transferring children of the group to another group. See Stuart D. Stein, “A Lecture on The Armenian Genocide“.

3) Turkey in Europe: Breaking the vicious circle, the Second Report of the Independent Commission on Turkey (September 2009), p.30.

5) While for many years the Armenian issue based on the claims of genocide was shouldered by Armenian Diaspora in many corners of the world, but notably in the US, France, Lebanon and Argentine. Suddenly a state representing the Armenian identity emerged next door to Turkey. See: Rouben Paul Adalian, op.cit., and also: Cengiz Çandar, “No Incentive for Turkey, Armenia To Normalize Relations”, Website of Al-Monitor.

6) Turkey in Europe: Breaking the vicious circle, the Second Report of the Independent Commission on Turkey (September 2009), p.30.

7) Vicken Cheterian, “Armenian genocide and Turkey: then and now“.

8) Tuğçe Erçetin, “The Reasons of the AKP’s Decision on the Armenian Opening and its Failure Factors“.