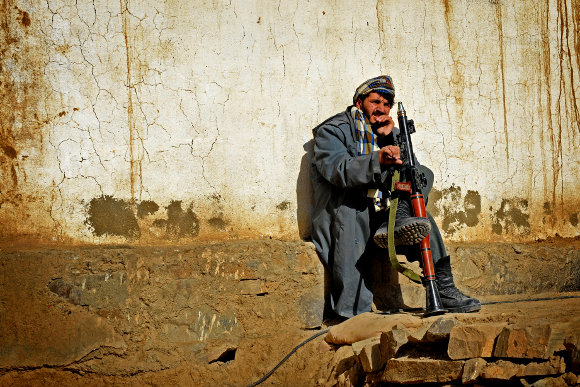 Thirty years of conflict has left a history of war crimes, human rights abuses, and atrocities, for which many victims have never received justice.

In September of 2013, the release of a list containing 5,000 names of those killed during the communist regime in Afghanistan sparked two days of mourning throughout the nation.

The list, which was uncovered during the trial of an alleged Afghan war criminal, now living in Germany, is amongst the many pieces of evidence illustrating the extent of war crimes that have taken place throughout Afghanistan’s three decades of conflict; from the communist backed government to the civil war period of the early 90s, from the Taliban regime to the post-2001 peacebuilding decade.

Sadly, despite witnessing much progress in the past 12 years, Afghans have still not seen any substantial efforts by the state or international community to recognize and address the issue of past crimes. Moreover, Afghan’s continue to face brutality and torture at the hands of warlords, powerbrokers and the Taliban.

While this has always remained a serious cause for many in Afghanistan, it has regained great interest and attention as Afghanistan prepares to hold its 3rdpresidential elections. With Karzai stepping down, the elections will be the first peaceful transition of power in the history of the country. But the absence of any debate on the issue of transitional justice, combined with the backgrounds of some of the presidential candidates in previous conflicts and war crimes, has created frustrations and concerns amongst many voters in Afghanistan. While Afghans are ready to hold elections and receive a new government, they fear that the ambiguity created by the state concerning the issue of past, and thus future, war crimes will mean that the culture of impunity will continue to remain unaddressed.

In 2001, following the international communities intervention and commencement of the statebuilding efforts in Afghanistan, there have been attempts to pursue a process of transitional justice. However, these efforts have remained weak on part of the Afghan government, while remaining inconsistent on part of its international partners.

Concerning the latter, while the international community organized the Bonn Agreement which launched the democratization process, it also incorporated alleged war criminals as signatories to the same agreement and abstained from making any reference to addressing past crimes and human rights abuses. This has laid a precarious foundation for the future of transitional justice in the country. Such prioritization of security above the rule of law has not only weakened the legitimacy of the government but also that of the judiciary.

The years that followed the Bonn Agreement did see some progress on this issue, but this came to an abrupt end in 2007 when the government passed the National Reconciliation, General Amnesty and National Stability Law (known as the Amnesty Law).

In 2002, following a decree by Hamid Karzai, the Afghanistan Independent Human Rights Commission (AIHRC) was established to help address the legacy of war crimes and human rights violations that took place in Afghanistan prior to 2001. AIHRC was tasked to “undertake national consultations and propose a national strategy for transitional justice.” Accordingly in 2005, the AIHRC published its first report documenting past crimes titled A Call for Justice Report, which was, and remains, a key document reflecting local grievances and instances of war crimes in Afghanistan.

Upon the request of the government, the AIHRC took the findings of the report and charted a national Action Plan for Peace, Reconciliation and Justice in Afghanistan (the Action Plan), and was launched in December 2006 by President Karzai.

The Action Plan forced transitional justice onto the political landscape and was also included as one of the benchmarks for both the 2006 Afghanistan Compact and the 2008 Afghanistan National Development Strategy (ANDS).

The Action Plan laid out five comprehensive activities aimed at addressing past crimes and also to instil a culture of accountability and respect for human rights. But unfortunately a severe lack of political will meant the Action Plan was not able to meet its benchmarks, and in March 2009 it expired despite AIHRC’s requests to the government to extend its timeline. It seems the Action Plan was intended to serve as nothing more than a symbolic gesture, as the passing of the Amnesty Law in 2007 had sealed the fate of the Action Plan before it even reached its expiration.

In 2007, Parliament passed the Amnesty Law granting “general amnesty” to “all political factions and hostile parties who were involved in one way or another in hostilities before the establishment of the Interim Administration” before 2001.

This law also extends to those groups who are currently in fighting the government, such as the Taliban. General amnesty is granted only once parties adhere to “the Constitution and other enforced laws.” However, the only provision of the bill that makes reference to judicial prosecution of war crimes is the provision that recognizes the individual rights of war victims to seek justice and issue formal complaints against those alleged to have committed war crimes.

In principle having a mechanism to lodge formal complaints can be considered effective. However in practice few victims will be able to take this action, as many of the alleged war criminals currently hold positions of great authority in the government.

The key concern with the Amnesty Law is its apparent contradiction to the Afghan Constitution, the Afghan government’s commitments in the Justice Action Plan and to its international legal obligations such as responsibilities to the ICC and Rome Statute, which Afghanistan ratified in 2003.

By 2009, President Karzai began to show great reluctance to address the issue of transitional justice. In one such instance during the presidential elections in 2009, when he was criticized about the presence of war criminals in his government, he asserted, “we should not repeat old issues.” Many in Afghanistan believe that President Karzai initiated the Amnesty Law as a means to pave the way for the reintegration and reconciliation efforts with the insurgency launched in 2010.

Unlike earlier failed efforts at reconciliation such as the Disarmament, Demobilization and Reintegration of the Afghan Militia Forces (2003) and ‘The Program Takhim-e Sohl’ (2005), the current Afghanistan Peace and Reintegration Program (APRP) has been supplemented by the Amnesty Law. The law has provided blanket amnesty for all members of the insurgency while failing to incorporate mechanisms for victims of their atrocities wishing to seek justice.

The Amnesty Law is seen to provide the legislative framework for APRP’s activities. Under Article 3, section 2, of the Amnesty Law it stipulates that “Those individuals and groups who are still in opposition to the Islamic Republic of Afghanistan and cease enmity after the enforcement of this resolution and join the process of national reconciliation, and respect the Constitution and other laws and abide them shall enjoy the benefits of this resolution.”

The implementation of the Amnesty Law through APRP has been a cause of great anxiety, particularly with respect to the reconciliation of top-level Taliban leaders and commanders. Similar to programs that preceded it, combatants reintegrated or reconciled in APRP are not vetted for human rights abuses. Moreover, with the Amnesty Law supplementing APRP issues of past war crimes has also become a non-issue.

The challenges for civil society to effectually voice concerns

Key members of the international community have also been silently watching these developments unfold, having remained neutral on issues of accountability and war crimes. However, civil society groups, particularly women’s based groups, have not sat silently and are actively voicing their concerns.

The AIHRC has been one of the key supporters of the Justice Action Plan and the only national body to take significant steps in documenting past crimes. It has also taken the responsibility for commemorating victims of war crimes when the government was unable to do so.

In 2009 the AIHRC, United Nations Assistance Mission to Afghanistan (UNAMA) and International Centre for Transitional Justice (ICTJ) created the ‘Afghanistan Transitional Coordination Group (TJCG) which brought together over twenty local and international organizations who collectively work to promote transitional justice activities in 2010 and in 2011.

Contrary to what the Afghan Government suggests, the issue of transitional justice is not an old or forgotten issue in Afghanistan. It remains a constant demand of the Afghan people, as memories of past crimes and abuses remain raw in their hearts. However, while some call for more traditional judicial processes to take place, this article would argue that more non-judicial processes would be more appropriate, as the space for former has been missed.

One such example of this was Vice Presidential candidate, Rashid Dostum’s apology to the Afghan public for his involvement in past war crimes – though some called this mere political manoeuvring others welcomed it as a step in the right direction and hoped others would follow his path.

Hence, in order to soften people’s memories and addresses their grievances, the Afghan government, civil society, and members of the international community must assume grounded and context sensitive approaches to dealing with past crimes that are both feasible and appropriate.

In this pursuit, key actors namely the Afghan government, international community and civil society could take the following steps to ensure this. The Afghan government should take concrete steps to marking an official victims’ day and creating national memorial sites to acknowledge and commemorate the victims of war crimes. Civil society should engage and bring the government back into the dialogue process on transitional justice, instead of isolating the government and other relevant institutions. Civil society should also work for the Amnesty law to be repealed, and support and strengthen the Afghan law enforcement and judiciary to prosecute those accused of mass atrocities.

This article was informed by a policy note, Transitional Justice in Afghanistan: “We Should not repeat old issues”? written by the author for the Global Partnership for the Prevention of Armed Conflict, October 2013.

The article was originally published on Insight on Conflict and can be accessed by clicking here.