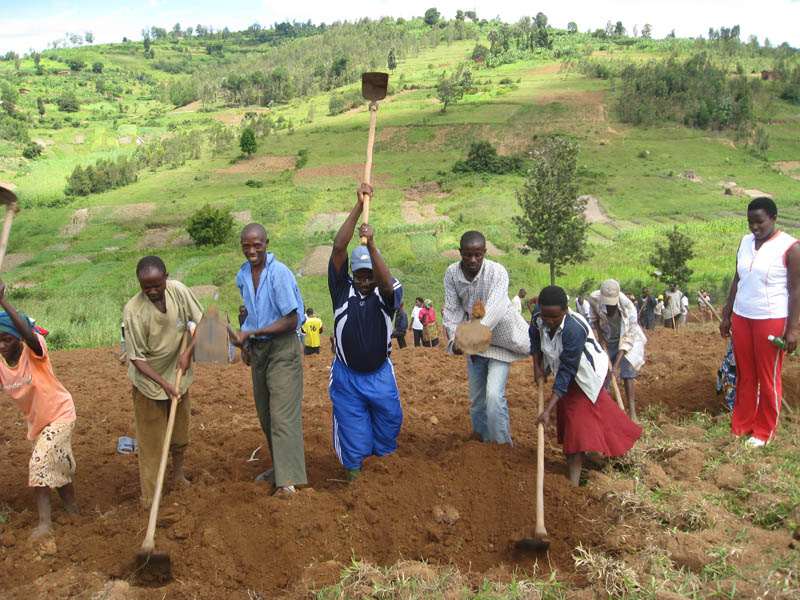 The concept of ‘Umuganda’ – which means ‘coming together in common purpose’ – is to promote unity and reconciliation in a society that has been devastated by conflict, genocide and poverty.

In twenty years, Rwanda has transformed from a country devastated by genocide, to a peaceful nation striving for peace and prosperity. Rwanda has truly managed to rise from the ashes with great visions for a better future.

Communities devastated by war and conflict can only be rebuilt by its own members, and one way Rwanda is focusing on restoring relationships between people is through mandatory community service, called ‘Umuganda’. The word ‘Umuganda’ means ‘coming together in common purpose’ and on the last Saturday of each month, from 8am to 11am, people aged from 18 to 65 come together and contribute to rebuilding their country. The concept is related to the idea of solidarity and a communal sense of living, and all over the country one can see people participate in cleaning streets, cutting grass and trimming bushes along roads, or repairing public facilities and building houses for vulnerable people. Also, people with particular skills can be seen offering their services for free on this day.

One can ask, what are the benefits from having Umuganda? There are more than economical benefits; the community work is also vital in terms of reconciliation and renewal in Rwanda. Umuganda is a traditional practice dating back in the pre-colonial period, however the idea behind it has changed, and today, the concept of this community work is to promote unity and reconciliation in a society that has been devastated by conflict, genocide and poverty.

The Rwandan culture focuses on helping, sharing and socializing; bringing people from different backgrounds together to volunteer their time to their country and work towards a common goal that will help Rwandans realize they are one, and that they need to contribute in order for peace and unification to become a reality. The day of Umuganda is intended to build community involvement and strengthen cohesion, helping reconcile people who were once divided by ethnicity and genocide. The people of Rwanda truly demonstrate that a country with such a bitter history can rebuild and offer hope to its people.

The term reconciliation refers to the process of developing a mutual conciliatory accommodation between enemies or formerly antagonistic groups. It refers to the process of moving towards cooperative relationships. Umuganda contributes greatly in bringing Rwandans together for a common goal of developing the country and restoring relationships. As a young Rwandan girl explained, “it helps the development of our country, and it is especially important that youth get involved and that their mindset is focused on that it is their job and their responsibility to rebuild our country, to make it more developed, and reconstruct what was destroyed in the Genocide.” Another positive aspect of Umuganda in respect to reconciliation is the public meeting afterwards, where people sit together and openly discuss problems with their neighborhood leaders. It is a way for people to access authorities to articulate their needs and voice their opinions on various issues.

This year, for the 20th commemoration of the Genocide perpetrated against Tutsis, there will be a special Global Umuganda that will take place on March 29th. Initiated by Never Again Rwanda (NAR) – in partnership with AERG, PLP, Aegis Trust, and Stand America – Global Umuganda will mainly focus on mobilizing youth in Rwanda to help Genocide survivors. Youth in 15 African nations as well as youth in Canada, Belgium, the UK, and the US will be mobilized to help vulnerable people in their own communities while reflecting on the men, women, and children who were brutally murdered in Rwanda 20 years ago.

In Rwanda, youth will help vulnerable genocide survivors. Specifically, youth from Never Again Rwanda clubs and associations will be located in the Gasabo District, in Rusororo sector in the Ruhanga village where a widowed genocide survivor lives with her three children. The main tasks will involve rebuilding, repairing and and cleaning her house, both inside and outside, as well as building a kitchen garden. Stakeholders will carry out similar tasks in different districts all over Rwanda with the help of mobilized youth.

Global Umuganda will be followed by a discussion with the youth and Genocide survivors around the 20th commemoration and the Kwibuka20 theme Remember-Unite-Renew, to how they as a young generation can take an active role in preventing genocide and conflict in order to create lasting peace in Rwanda.

It has been twenty years since the horror of genocide, and NAR recognize the fact that there needs to be a great emphasis on the role of Rwandan youth. The youth need to take an active role in their communities and the society so that they can learn from the past and work towards sustainable peace.

Ingvild Gundersen is currently finishing a master’s degree in Intercultural Relations and Social Advocacy at Lesley University in Cambridge MA. As part of the program, Ingvild is completing an internship with Never Again Rwanda, a member of the Global Coalition for Conflict Transformation. Born and raised in Norway before moving to the US to study,  Ingvild hopes to to pursue a career within human rights and peacebuilding.