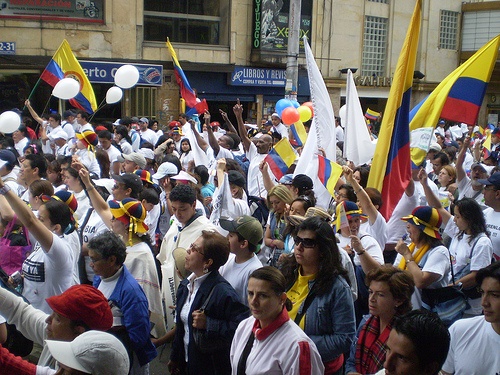 Indigenous peoples around the world often find themselves caught up in conflict, but ignored by the mechanisms used to end them. Including all parties is integral to ensuring lasting peace.

Although no authoritative definition of “indigenous peoples” exists, one of the most cited descriptions of the concept of “indigenous” is outlined in José R. Martínez Cobo’s Study on the Problem of Discrimination against Indigenous Populations, as follows:

Indigenous communities, peoples and nations are those which, having a historical continuity with pre-invasion and pre-colonial societies that developed on their territories, consider themselves distinct from other sectors of the societies now prevailing on those territories, or parts of them. They form at present non-dominant sectors of society and are determined to preserve, develop and transmit to future generations their ancestral territories, and their ethnic identity, as the basis of their continued existence as peoples, in accordance with their own cultural patterns, social institutions and legal system…

It is estimated that indigenous peoples number some 370 million in around 90 countries, which is less than 6 per cent of the world’s population. But they speak an overwhelming majority of the world’s estimated 7,000 languages, occupy 20 per cent of the earth’s territory and represent as many as 5,000 different cultures. They thus account for most of the world’s cultural diversity, though they constitute a numerical minority. Indigenous cultures face the dual and contradictory threats of discrimination and commodification, as well as racism and discrimination that sees them as inferior to non-indigenous communities and their culture as a hindrance to their development. The areas they inhabit often coincide with areas of high biological diversity, and a strong correlation between areas of high biological diversity and those of high cultural diversity has been established.

Indigenous peoples continue to be over-represented among the poor, the illiterate and the unemployed. They make up 15 per cent of the world’s poor and also make up about one-third of the world’s 900 million extremely poor rural people. They also face huge disparities in terms of access to and quality of education and health as well as employment and income. Dispossession of their ancestral lands and deprived of their both physical and cultural resources of survival leads to fragmentation of their own political institutions while they remain excluded from political power of the nation-states they live in.

As a result of their systemic discrimination, extreme poverty and lack of social development and political marginalization, indigenous peoples are among the most vulnerable populations in any conflict – and more so for intrastate conflicts, in which they are often trapped in the crossfire between two warring sides and/or represent one of the sides of the conflict.

Indigenous peoples are often victimised by both of the warring parties in many intrastate conflicts. They are subjected to abuse, including executions, disappearances, torture, displacement and harassment, by state forces and vigilante groups who say they are rebels or rebel sympathizers. On the other hand, they are often also forced to join rebel groups, who claim that they are fighting for their cause.

In many such conflicts, indigenous peoples form a third side of, or resistance to, the conflict. A case in point is the ongoing Maoist (Naxalite) insurgency in India, where, armed with traditional weapons, they are fighting for human rights and collective tribal ownership of their ancestral lands. Caught between organised insurgency and the governmental backlash, such resistance tends only to lead to violent repression from all sides.

At the same time, indigenous peoples frequently find themselves involved in conflict with the dominant society and the state, mostly related to the loss of their lands, territories and resources, or to the deprivation of their political, cultural and economic rights. Such loss and deprivation largely occurs in the name of development, conservation, migration and urbanisation, and is often accompanied by militarism and violence that disproportionately affects indigenous women and girls.

Indigenous peoples, like all others, need to access to mechanisms for peaceful conflict resolution. Scholars and practitioners agree that peacebuilding involves achieving negative peace (the end of violence) as well as guaranteeing positive peace (addressing the underlying causes of conflict, including the development of social justice and political participation).

On many occasions, measures to end violence – peacemaking and peacekeeping, including negotiations and ceasefire – are negotiated at high political levels that indigenous peoples have little access to or representation in, even though they form the majority of combatants. Following transitional justice, reforms and other processes to guarantee sustainable (positive) peace also often fail to address specific issues and grievances of indigenous peoples that represent the root causes of conflict. Lack of will and conflicting priorities among political actors in post-conflict situations, as well as inadequate participation of indigenous peoples in peacebuilding processes and a lack of understanding of indigenous values are some of the reasons for that failure.

The United Nations system does not provide specific juridical mechanisms for the resolution of conflicts to which indigenous peoples are a party. The International Court of Justice (ICJ) does not provide legal standing to indigenous individuals or collectives to pursue litigation against states and others. Indigenous peoples to a limited extent have access to the human rights treaty bodies and the regional international courts, such as the Inter-American Court, for example in cases where a state party has agreed to optional protocols, or where a state party has reporting obligations under a treaty. However, the decisions of these human rights treaty bodies are not binding and are often ignored. Thus, indigenous efforts in these fora have not had significant results in the resolution of conflicts.

In December 2000, a Manila-based indigenous organization, the Tebtebba Foundation, convened an International Conference on Conflict Resolution, Peacebuilding, Sustainable Development and Indigenous Peoples that produced the Manila Declaration, which affirmed the right of indigenous peoples to create new institutions of peacemaking that would address the problems mentioned.

According to this Declaration, an independent commission held its first fact-finding mission in Colombia where indigenous peoples have been trapped in the crossfire of the 50-year civil war. The mission, led by an indigenous female community chief, carried out intensive consultations with indigenous groups across the country regarding appropriate conflict resolution interventions. However, when the investigators left the country, the local people who spoke out were unprotected and vulnerable to retaliation.

To date, the recommendations of the Manila Conference have not been implemented and there continues to be a need for specific mechanisms of resolutions of conflicts involving indigenous peoples in the United Nations and at the national level. However, at the grassroots the UN Secretary General’s Rule of Law and Transitional Justice in Conflict and Post-Conflict Societies recognises the need for indigenous and informal justice traditions. Increasingly, peacebuilding processes in different countries are also recognising this, which is a good sign for the provision of greater legitimacy and peace at local levels.

The UN Declaration on the Rights of Indigenous peoples provides for the right of indigenous peoples to develop their own decision-making procedures, including judicial systems. There is therefore a daunting need to set up effective mechanisms or processes, at all levels and founded on indigenous values and systems, in order to safeguard positive peace for indigenous peoples. Relations between states and indigenous peoples must always be borne in mind if some of the world longest-running conflicts are to be solved.

Prabindra Shakya currently works with National Coalition Against Racial Discrimination in Kathmandu and is involved in research and advocacy on human rights and peacebuilding.

This article was published by Insight on Conflict and is available by clicking here.

If you are interested in writing for TransConflict, then please do not hesitate to contact us by clicking here.