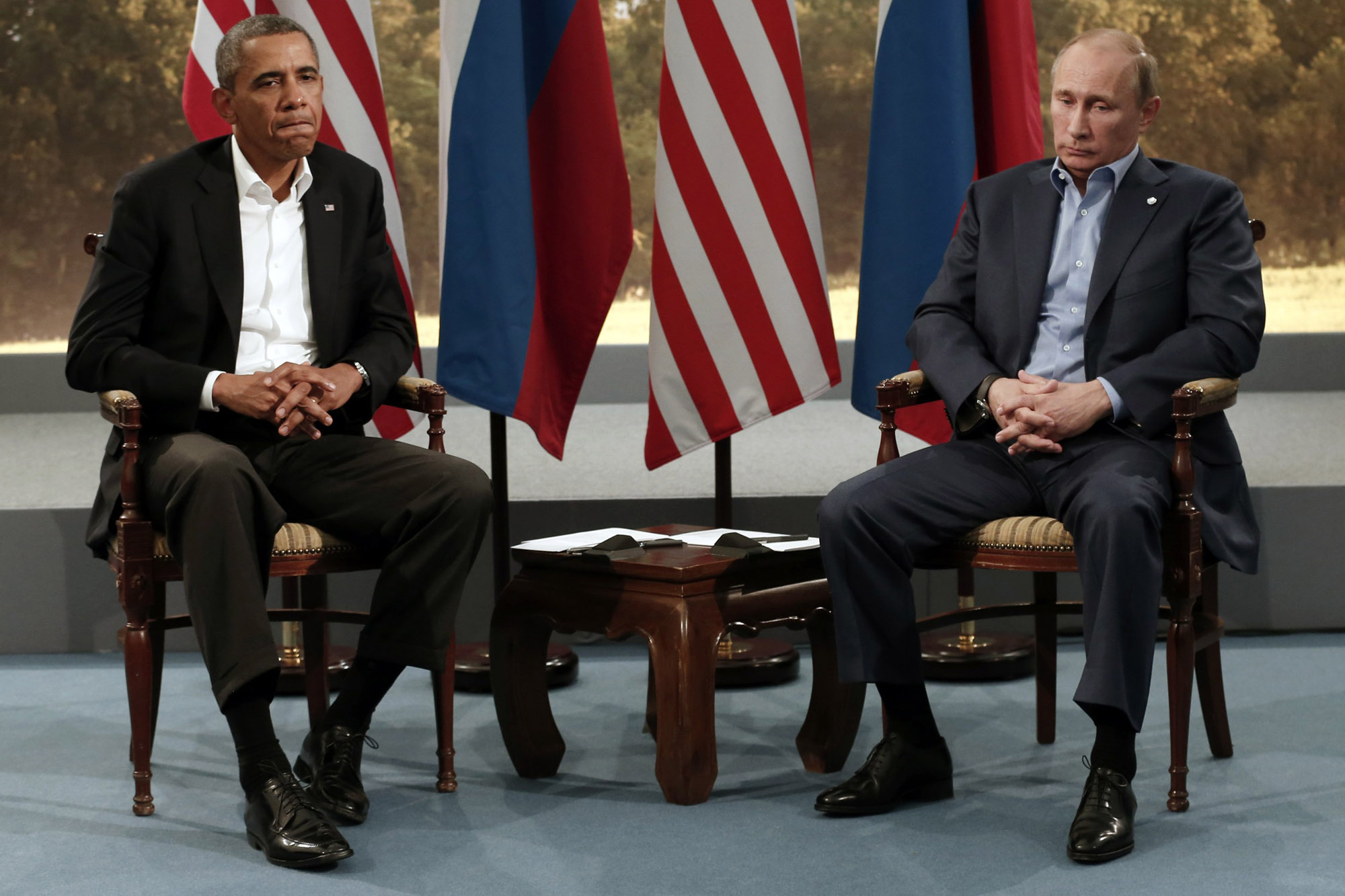 The current crisis should encourage Europeans and Russians to explore structures to push security and political collaboration to the same high level as economic integration. Whilst that may not completely end changes in borders and the structure of political community, it might provide a venue to find mutually acceptable solutions.

More than two months into the Ukrainian crisis the West—mostly the U.S.—has not been able to “solve” the issue. In fact, from the perspective of Washington, it has gotten worse. Not only is Crimea in Russian hands, much of eastern and southern Ukraine is now bedeviled by insurrection. This issue defies resolution for three interrelated reasons.

First, it is a very complex situation—one that defies the normal American propensity to identify major international challenges as a Sisyphean struggle between virtue and turpitude (and Washington always defines virtue). The American self-identified grip on rectitude is part and parcel of American “exceptionalism.” Despite some recent literature that restricts American exceptionalism to the uniqueness of the country’s political system, the ability to identify, understand and enforce morally appropriate foreign policy has been a part and parcel of the American political character since John Winthrop’s 1630 declaration that the new political community was a “shining city on a hill”, established by God Himself as light in and to the world. It is a belief that has become mantra for many – if not most – American policy makers ever since.

Certainly, the Russian military has been active in eastern Ukraine, just as it was in Crimea; after initially lying about the presence of Russian troops in Crimea President Putin finally has admitted their involvement. Moscow is driven not by a desire to resurrect the Soviet Union (the so-called “Soviet Spring”), but by an effort to reassert a great Russian state built on Russian nationalism and the theory that ethnic and linguistic Russians should live in a Russian state. At the same time, Russian interference has been clouded and complicated by strong, indigenous pro-Russian sympathies that have been simmering for years. Much of eastern and southern Ukraine (originally New Russia) had been part of the Russian Empire from the time Catherine the Great wrested the territory from the Ottomans during the second half of the 18thcentury until 1954. To complicate the situation even further, the majority of the population in the east and south – unlike Crimea – is ethnically Ukrainian, not Russian.

Moreover, ever since Ukraine declared independence from the collapsing Soviet Union in 1991 it has been ruled by corrupt leaders who have robbed the country of billions of dollars. Irrespective of whether they have been pro-Western or pro-Russian, Ukraine’s political class has been defined by “kleptocracy.” Piled on top of ethnic and linguistic issues, the corruption has become a major underpinning of the unrest. In this time of crisis, the government in Kiev is so bereft of money that it has been forced to beg the population for funds to equip and train a military that in its present condition cannot stand up to the Russian military. It has been an interesting and telling observation that Washington not only has been willing to overlook criminal activity for 23 years by has committed billions of dollars to shore up many of the offending politicians and the Obama administration, in a fit of anti-Russian fervor, is prepared to commit an another one billion dollars (on top of promised EU funds).

Second, the hoped for post-Cold War strategy of American hegemony and world-wide democratization – born of American exceptionalism – has failed. The end of communism led to a sense of optimism and chest-thumping bravado in U.S. political circles that was mistaken for American capability to lead the world to a new democratic millennium. Unfortunately, the American-led experiment came up against the tough reality that not everyone was ready, willing or able to bend to Washington’s view of the future. As American failure in Iraq and Afghanistan and the disintegration of the “Arab Spring” began to sink in, increasing numbers of foreign leaders not only defied U.S. policies, they saw that the world had changed so much that Washington was becoming increasingly incapable of shaping the international environment. In short, the “American moment” was not much more than that – a moment. Russian President Putin is not cowed by the U.S., but neither are a whole host of others. It is a world the U.S. will have to get used to.

Third, the tools the West has attempted to use have been sorely lacking. Throughout the Ukrainian crisis, American officials have engaged in almost embarrassingly inept and naive rhetoric. It is composed of statements that do not appreciate the complexity of the situation and tend towards a moral certainty that does not recognize our own spotty historical international record and assumes we can preach to the rest of the world about how to behave. To Putin, who is already on the war path, Washington’s arrogance is especially galling and counterproductive.

In addition, the Ukrainian crisis, especially Russian involvement, has breathed new life into the NATO corpse. This is designed more to reassure and placate East European allies than to provide a deterrent to Russian aggression. The Alliance is increasing air patrols in the skies above several East European members and naval patrols in the Baltic Sea. There has been talk of deploying “tripwire” American military units to the three Baltic Republics and Poland, but no final decisions have been made. Certainly the three Baltic Republics have substantial Russian populations in their eastern provinces and the Balts discriminate against them. So, an overt Russian intrusion, although unlikely, is not out of the question. But, does anyone believe that the U.S. would engage in military action if there were evidence of Russian interference? It is difficult to believe that two giant nuclear armed states would engage in military action over such political changes, however unjust they may be. The Russians know that NATO is essentially a “paper tiger.”

The sanctions being imposed by the West have had some impact on the Russian economy. Russian assets in the West have been frozen, there have been restrictions on the use of Western credit cards in Russia and Moscow has been suspended from the G-8. In addition, there are proposals to impose sanctions on Russian banks and petrochemicals. But, sanctions can only go so far because they are unlikely to dissuade Russia form involvement in Ukraine and because eventually they are likely to have boomerang effect on Western economies. The largest Western financial investment is in oil and gas, including half a trillion dollar deal between Exxon Mobil, the giant American firm and Rosneft, Russia’s largest oil and gas company. Hundreds of thousands of European jobs and billions of euros depend on the Russian market. Perhaps ironically, France has a major arms deal pending with Russia and Germany has sold Russia weapons for years. In Germany alone, about 300,000 jobs depend on business with Russia and some 6,000 German firms have business interests in Russia. Paris and Berlin will not surrender these economic boons easily, nor will Italy, the Benelux countries, Sweden, Norway and Greece – all of whom have substantial investment in the Russian market. As time passes it will become increasingly difficult to sustain major sanctions and even more difficult to impose new ones; the economic cost is just too great.

So, what is the answer? First of all, Washington needs to recognize that for nearly a quarter of a century the West has perpetuated a Cold War foreign policy that continued to view Russia as an outlier. The continuation and expansion of NATO once the Warsaw Pact was dissolved is a concrete recognition that the Cold War never ended for Washington. The Russia-NATO Council, which was designed to enhance cooperation between NATO and Russia, has acted more as a bold statement that even though the Cold War is finished Russia cannot be included in post-Cold War security structures. Proposals to form a Europe-wide security architecture were rejected in favor of continuing a military alliance that was at least in part anti-Russian. It is likely, but not guaranteed, that including Russia into the “new” Europe would have provided a more realistic platform to resolve major security issues. Consequently, the new NATO muscle flexing in Eastern Europe is likely to inflame the situation, not improve it. Recognition of this by Washington and Brussels and, as difficult as it might be for Eastern Europe to accept, they too must be brought to an understanding that NATO is part of the problem, not part of the solution.

The current crisis should encourage Europeans and Russians to explore structures to push security and political collaboration to the same high level as economic integration. This will not completely end changes in borders and the structure of political community, but it well might provide a venue to explore those issues and find mutually acceptable solutions. As the pre-World War I environment demonstrated, economic and financial integration was not a guarantee against war and it would not be a guarantee now. However, the current international economic and financial world is not as concretely bound to national economies as they were in the pre-World War I world. Consequently, an effort to model security and military structures and policies more in line with the kind of intimacy that defines financial and economic relations might have a beneficial impact in the security environment.

Steven E. Meyer is retired from the Central Intelligence Agency and the U.S. Department of Defense. Currently, he is a partner in the TSM consulting firm and a Fellow at the Center for Public Justice.