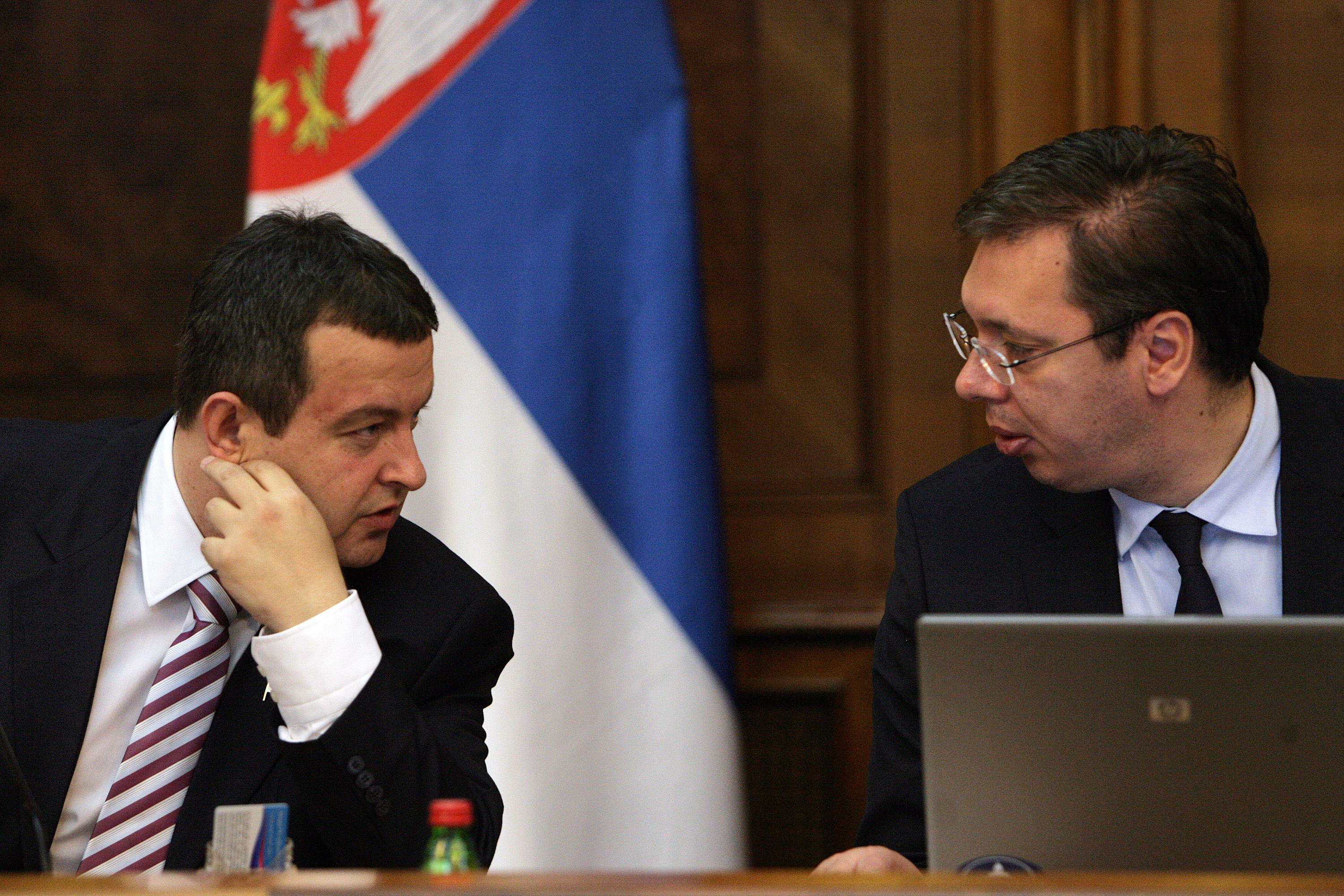 As there is no indication that any EU member will block Serbia from getting into the EU without recognizing Kosova, Kosova’s – and Washington’s – main goal should be to lead to the condition that neither contestant can get into the club unless they both do.

The agreement between Belgrade and Pristina is working well – for the Serbs.

The firm of Dacic & Vucic, now renamed Vucic & Dacic, continues to run rings around the less well managed operation in Kosova and the musty brokerage house in Brussels. With the election season over and such unimpressive opponents as Boris Tadic nudged into well-deserved obscurity, Vucic has lowered the volume of his campaign against corruption and veered what is left of it away from Dacic (what’s up with Darko Saric these days?).

Whatever Serbia’s two principals think of each other personally, they continue to cooperate in their well-crafted script regarding the Lost Province. Their rhetoric about Serbia’s progress toward EU membership includes pointed denials that their country will ever recognize Kosovar independence.  These are not just ritual nods to nationalist constituents, but rather public reaffirmations of Belgrade’s bedrock position that it will get into Europe without having to sacrifice a territorial claim it one day will make good.

The Europeans continue to cooperate with Serbian strategy.  In Belgrade, EU Enlargement Commissioner Stefan Fuele praised Serbia’s approach to its European calling and said he “shares the same goal” with Vucic.  The next day Fuele, now in Pristina, took a less positive stance on Kosova’s candidacy, warning that it “has more work to do” on reforms.  The EU continues to encourage Serbia to believe recognition of Kosova’s independence is not necessary for Belgrade to join the club, which removes any pressure Belgrade might feel to rein in the Serbs living north of the Ibar.  The latters’ efforts to forestall any indication of Kosovar sovereignty on their turf has set a gold standard now being adapted so successfully by separatists in eastern Ukraine.

Let’s review the bidding.  On the day the Ashton-mediated agreement was signed in 2013, I was at a conference in New York, along with a fair number of academic Balkanists.  One of them convened an ad hoc plenum in which we all gave our first-blush reaction to the deal.  When the question came up of the five members of the EU who so far do not recognize Kosova’s independence, some in the group pointed to hopeful noises out of Bratislava and Bucharest as indicating the agreement would generate movement toward the universal recognition Pristina needs before it can hope to have an equal footing with Belgrade.  The general mood—as I remember it—was a sense that the agreement was a breakthrough, not the end of problems but a major step in the right direction.

So far, that is not how things are turning out.  None of the five had budged toward recognition of Kosova.  Slovak Foreign Minister Lajcak (who was the UN viceroy for Kosova before taking his current position), recently went to Belgrade, praised Serbia’s “right tack” toward the EU, and dodged the Kosova issue.  Romania, the other one of the five considered likely to change its stance, still shows no sign of doing so.  Neither does Greece or Cyprus.  Scotland’s independence referendum has the attention of Spain (and Cataluña), reinforcing Madrid’s consistent denial of the US position that Kosovar independence cannot possibly be considered a precedent for other secession problems.

The status issue is the only issue.  The belief some hold that administrative and technical agreements will lead to some sort of normal relationship, and that this normalcy eventually will create the basis for a resolution of the status dispute is—in my view—naïve.

In short, the basic situation remains as it has been since the April deal was put in place.  Serbia retains its status as a universally recognized state (and one that is moving skillfully toward EU membership).  The promised creation of a Serbian Municipality inside Kosova rewards local Serbs who successfully repelling all efforts to establish Kosovar sovereignty north of the Ibar with their own international legal status.  They can take their time creating the Municipality and crafting strategies to extend their challenge south of the river using the Municipality as an umbrella.  Kosova, meanwhile, stands out as lacking the same legal/political status, due to the stance of the EU-5.  The United States, Kosova’s patron, not only remains unable to force through universal recognition of the Kosova it created through a fitful series of tacking and talking between 2006 and 2008, but—given developments in Syria, Israel/Palestine, Ukraine, Africa, and east Asia—seems unable to accomplish much of anything.

Even those Serbs who “cooperate” with Kosovar institutions are pressing their envelope.  Kosova wants to establish an army—a basic security instrument for any entity that wants to call itself a state.  It cannot do this, given the refusal of those Serbs who agree to take seats in Kosova’s parliament to go along with such a clear statement of sovereignty.  Kosova’s government has toyed with changing its rules so minorities no longer would be guaranteed seats, but both the minorities and the internationals decry this idea and so things remain deadlocked.

The 2013 agreement and its aftermath have put Kosova in the unenviable position of having only one road to the EU—the one through Belgrade.  Vucic, Dacic and their colleagues can keep their approach to the Lost Province on cruise control, making technical arrangements as necessary with Pristina while walling off the status issue from the more difficult economic decisions that will determine how long and how effectively the government can hold power.

Various Serbs have set up 2020 as the target date for Belgrade’s admission to the EU.  The EU makes no promises, of course, but the friendly relations between the Europeans and the firm of Vucic & Dacic are a testament to the skill with which Serbia’s formidable leadership team—who have pedigrees going back to the firm of Milosevic & Seselj, let us remember– has remade their country’s image from 1990s villain to regional adult.  This accomplishment is even more impressive in the context of Belgrade’s skill in maintaining equally good relations with a resurgent Russia.  Vucic & Dacic are handling the Ukrainian problem as skillfully as they are managing Kosova.

So far, there is no indication any EU member will block Serbia from getting into the EU without recognizing Kosova.  A few German legislators appear to favor imposing this condition; Kosova’s—and Washington’s—main goal should be finding ways of nurturing that feeling, leading to the condition that neither contestant can get into the club unless they both do.  At the moment, this seems unlikely to happen, in large part because the performance of Vucic & Dacic stands heads above that of anyone else.