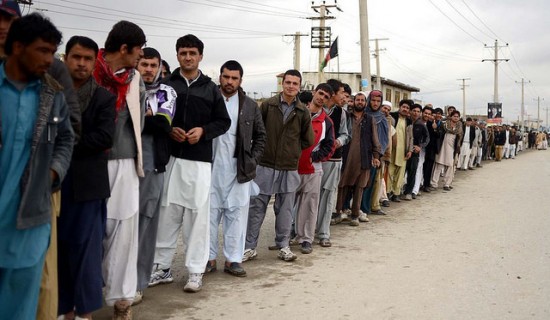 Impassion Afghanistan plays a role in the elections by contributing to the development of technology in the country, and producing trained citizen journalists using social media to report from the field.

On April 5, 2014, Afghanistan experienced its first democratic transfer of power. In a country where, until recently, the Ministry of Communications and Information Technology didn’t even have e-mail addresses set up (government officials were known to use their personal Hotmail and Gmail accounts rather than official e-mails), what role could technology play on the eve of such an important event?

Impassion Afghanistan, which bills itself as Afghanistan’s first digital media agency, had an idea. The presidential election could be an opportunity to develop technology tools that facilitated citizen engagement and empowered citizen voices.

The result was Paiwandgāh, a social media and mobile-based platform for citizen journalism. The idea was to support social media use in Afghanistan, while also empowering increasingly connected Afghans to speak up and have their voices heard, engage in political dialogue, and become included in the political process. Built for open dialogue among citizens, Paiwandgāh emphasized community management, building, and engagement in the period leading up to and during the elections.

Paiwandgāh was the final part of a three phase project. The first phase was Paiwand, a national social media summit held in September 2013. 260 social media influencers from 26 provinces attended to discuss the social media sector, community building, and practical advice for encouraging social media use in Afghanistan. As a follow up, social media trainings were conducted in five provinces, along with a radio-based training program on citizen journalism in three languages. Upon the conclusion of the first two phases, the Impassion team faced a question – now that participants had attended Paiwand and been trained, how could they be unleashed into the world as citizen journalists?

Impassion’s understanding of Afghanistan was key to the success of Paiwandgāh. From the beginning, Paiwandgāh was developed based off insights the team had into the context of the local culture. For example, given its low internet penetration rate, understanding Afghanistan as a content consuming rather than a content producing country was a key factor in designing the project. Eileen Guo, who co-founded Impassion alongside Ahmad Shuja, told me, “I knew that when we created Paiwandgāh, we couldn’t just depend on people to come forth and give us content.

Instead of the “If you build it, he will come,” mentality, there was an emphasis on consistent engagement. Three community managers were dedicated to creating content in Dari and Pashto, and served as points of contact for the citizen journalists. Every week, these community managers sent out news assignments in the form of a question via SMS and e-mail to its pool of citizen journalists. The goal was to get the journalists into the practice of producing content. This was important for gathering information, insights, and opinions from local communities ahead of the elections.

On the day of the elections, Impassion’s staff was joined by interns and volunteer translators that managed reports coming in by phone, social media, and radio. Citizen journalists were so deeply invested that some called every hour to keep the Impassion team updated on what was going on at polling centers. One journalist from a province on the Pakistan border visited several polling stations and covered voter fraud and irregularities. On the day of the election, there were 525 reports from 27 provinces. There have been more than 1500 reports since the site launched on February 16th, 2014.

In a few cases, Paiwandgāh was actually the first among all media outlets to receive reports. Guo says, “One of my community managers called me around 11 AM– right after he had returned from voting himself – to let us know that a citizen journalist had reported a bomb had been placed at a polling center. We immediately put out the information on the platform, with the caveat that it hadn’t been confirmed. Thirty seconds later, a journalist confirmed it on Twitter.” To the team, it showed the potential of the system for obtaining real-time information on what was happening on the ground.

Impassion has plans to continue developing the capacity of its citizen journalists. The company has a special strength, which is that it understands community management and local engagement. Guo told me, “One of the biggest reasons that we’ve become successful is that we are starting to know Afghanistan really well… Especially in a country where the technology is so new, we don’t just create technology; we make sure to always pair that with the human aspect.” Further trainings will be held with citizen journalists to enable them to write more in-depth pieces. These trainings will be both in-person and online.

As the elections in Afghanistan continue, understanding what’s happening on the ground will be even more important for ensuring fair and peaceful elections. Impassion’s approach and Paiwandgāh may be crucial to making sure this happens.

Eugenia Lee is an ethnographer and qualitative researcher. She previously worked in international development in Kenya and is currently an associate scholar at the Foreign Policy Research Institute.