The Global Coalition to Protect Education from Attack (GCPEA) congratulates Pakistani education activist, Malala Yousafzai, and Indian child rights activist, Kailash Satyarthi, for winning the 2014 Nobel Peace Prize. Yousafzai—the schoolgirl shot by the Pakistani Taliban in October 2012 for defending girls’ right to education—has since become one of the world’s most vocal and passionate champions for education and young women’s empowerment. The Nobel announcement comes two years after the shooting, which failed to silence the teenager and instead amplified her message globally.

“Around the world, girls and boys growing up in conflict face similar threats as Malala Yousafzai braved in Pakistan—her courage gives hope to all students fighting for their right to education,” said GCPEA Director Diya Nijhowne. “The selection of Malala for the Nobel award sends the message to young people everywhere that the fight is one they can win.”

Attacks on education are a common tactic in the majority of conflicts worldwide. So far this year, deliberate attacks on students, teachers, schools, and universities in conflict-affected areas such as Gaza, Iraq, northern Nigeria, the Ukraine, and Syria have drawn widespread media attention. But GCPEA’s global survey, Education Under Attack 2014, found a pattern of such attacks in at least 30 countries over the last five years — far more than previously documented. 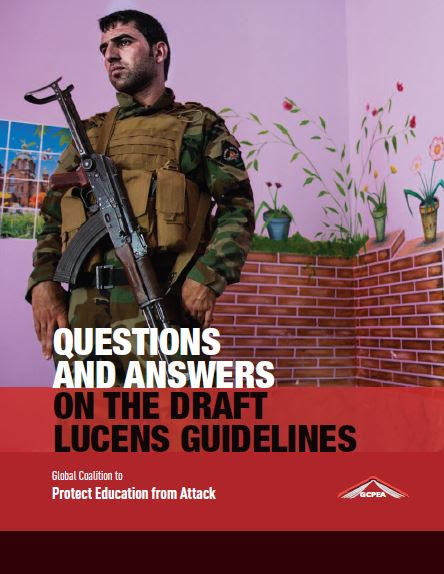 A significant risk factor for attacks on education is the use of schools as bases, barracks, weapons caches, detention centers, and for other military purposes. Such use can convert a school into a legitimate military target under international law. GCPEA, through extensive consultation with states, UN agencies, and non-governmental organizations, has developed the draft Lucens Guidelines for Protecting Schools and Universities from Military Use during Armed Conflict to maintain schools as safe zones during times of war. A new question-and-answer document is now available on the draft Lucens Guidelines and what they aim to achieve.

“By honoring Yousafzai and Satyarthi, the Nobel Committee has recognized the critical link between addressing the dire protection needs of so many of the world’s children and achieving peace and security,” said Nijhowne. “States and non-state armed groups must follow the Nobel Committee’s lead and protect the rights of young people in conflict, including by supporting and implementing the Lucens Guidelines.”