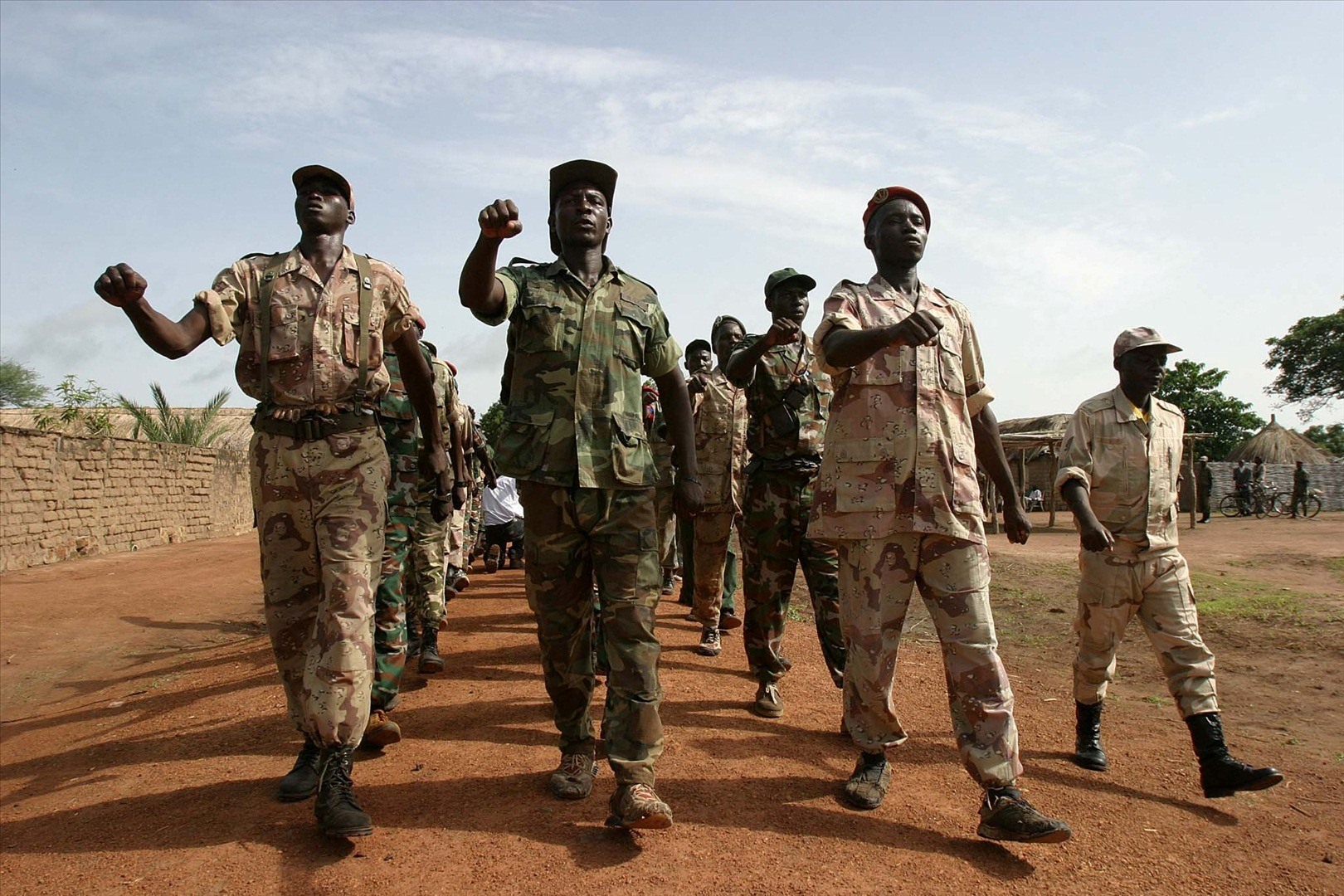 Genocidal violence is by and large political; when these politics are understood, non-violent platforms can then be constructed that provide a route to reconciliation and, in the case of the Central African Republic (CAR), rebuilding important institutions and systems for human security.

Conceptualising the quality of endemic mass violence in the Central African Republic (CAR) has not been seriously attempted. The dearth of this kind of analysis can be partly explained by the Western fatigue in responding to or engaging with such “African tribal/ethnic violence”. This is usually seeded by dominant narratives that portray such conflicts as bilateral ethnic conflicts, or clashes of civilization. Such was the case in Rwanda and Darfur, and in cases. In places like the Zaire/DRC, where there is no apparent heir to victim/perpetrator casting, a conflict is mislabelled, making it beyond comprehension.[1] Fortunately, or not, in the case of the CAR Muslims and Christians have been discerned as warring parties, and thus providing a convenient segway into this clash of civilization-style interpretation.

Western media characterisations are only one layer of the story, regardless of how influential in international policy they might be. In fact, the popular demonisation of such violence (be in favour or sympathy of any ”side”) only increases the conceptual and practical inaccessibility of trying to understand mass violence. Beyond outside viewpoints there is a myriad of relational perspectives and interactions that influence day-to-day events. The CAR finds itself sandwiched between two conflict regions of North Africa and the Great Lakes region, enabling the long-term flow of arms, refugees and soldiers.

Internally, the CAR has yet to achieve an acceptable standard of human security, even by reasonable regional standards. This lack of robust civil society and non-violent political structure make fertile ground for the worsening of mass violence in this year alone. The presidential musical charis that has accompanied the violence over the last year only makes this worse. This has created a situation which stares down the strong likelihood of a divided north-south. The possibility of partitioning is only exacerbated by the international community’s last ditch efforts that more often than not engages in too much, too little, too late in terms of humanitarian/military intervention. Those, in and outside of the CAR in favour of any kind of reconciliation for their communities, see this as another nail in the coffin, making the future bleaker indeed, but still not doomed.

Conceptualising mass violence in the CAR, then, is important, as this then leads to a clearer understanding of unique historical, socio-economic and political intersecting variables. This provides a better stage to engage in truth, reconciliation and justice projects that are essential to the political ecology of rebuilding civil society and removing impunity. The challenge presented is that popular and “working” (and the problem here is that often these classifications do not work, even in a theoretical sense) definitions of violence. “Ethnic cleansing” as a label of this type has been strongly dismissed by genocide scholars, like Martin Shaw.[2] This term, at best, only refers to a process of forced removal, which is integral to genocide as a process. Genocide, so dominated by the rigid and conceptually Swiss cheese-like UN Convention definition, remains, equally useless aside from making a fleeting rubber-neck moment. Again, popular discourse and critical thinking on a international level are befuddled by Western news-media, and its pervasive infotainment. Does genocide, though, hold more explanatory power in identifying the scope and quality of the destruction wrought by mass violence in the CAR?

Emerging understandings of genocide that rely on sociological and comparative perspectives leave us with a more fundamental and pliable concept which can be defined as the destruction of social groups. Social groups can be undermined and have their material and social existence extinguished through a combination of direct and structural forms of violence. Such is the case of the CAR communities have been steadily erased like the many Christian neighborhoods in Bangui. Homes have been looted and some have been evacuated by AU forces; images of desolate homes are also fairly commonplace. In the area of Boda, having a minority population of 24,000 Muslims people fear violence from militias and are requesting to be removed. Popular demands from this community were further echoed by Christian leaders. Group identification in this traumatic atmosphere spreads like wildfire adding to the problem of perception of the violence within the CAR.[3] At worst Seleka and anti-balaka militias, are increasingly operating in an anarchic way, hunting down and targeting large groupings or singled out targets, whom in a real or perceived way are identified as either Christian or Muslim, creating a radicalising effect. The following observation from John Ging, with the UN Office for the Coordination of Humanitarian Affairs, describes this trend, ‘This ethnic and religious dimension has resulted in the segmentation and segregation of communities. Ordinary people are being radicalized… manipulated [and] made to believe that segregation is the solution to the crisis.’[4]

As the successive back and forth of the violence continues, a narrow funnelling characterization is appropriate. The initial Seleka supported coup that led to new government was countered by former administration encouraged anti-balaka militias, who eventually forced a Seleka capitulation of power. As neat as this seems, and as the situation deteriorates, these “groups” becoming increasingly seen for what they are- fragmented political umbrellas of convenience that reveal a system of anarchy and political violence. From the larger conflict of a coup to increasingly piecemeal attacks in localised areas, the absence of basic human security creates a kind of chaos that is destructive to the group, like genocide, but without the “neatness” of ghettos, railway networks and gas chambers; or what some have called ‘post-genocide’.[5]

A gaping hole in analysis of the African wars centred in the Great Lakes region demonstrate this characterisation and what is missing from a similar narrative of the CAR. A brief comparison shows the following common elements of destructive violence: sexual violence, mobilisation of young and disenfranchised males to communal mass violence, the deployment of identity fundamentalizing labelling for political purposes, achievement of a coup by a minority-supported force and the distribution of arms by former or interested/outside parties. Whether this evolving, destructive trend of violence will continue beyond such regional loci, it is hard to predict. However, what is clear, is that such conflicts are emergent and will perhaps only be worsened by the axis of climate change and the associated human catastrophe, as seen in Kenya.

How, then, does such an emerging classification, or the notion of ‘post-genocide’ impact the capability of CAR citizens, regional parties, civil society to engage in transforming this conflict? The sad, but regular parade of UN-esque top-down diplomatic negotiation and intervention have yielded little progress. This elite centred approach often presents opportunities for risk-deference, as in present Syria and late 1990s Kosovo, where negotiations provide space for rearming and renewing conflict. Supposed endemic ethnic conflict beyond the reach of “civilization” should be a narrative of the past, especially when on the ground emerging conflict types are then being placed beyond comprehensive analysis and practice of peacebuilding.

Conflict transformation relies on the mobilization of middle-level and grassroots parties to engage in exploratory dialogue and building political and social space for find common ground out of mass violence. Key to this is also the development of non-violent avenues for dialogue and transformation. Mass violence of this magnitude does often lay waste to such structures making reconstruction a problem of paradoxical proportions: how can justice be pursued when legal systems and personnel have been drained or decimated? Justice, reconciliation and other transformative conflict projects require a clear conceptualisation of the quality of violence. To understand the social actor and group interactions that create collective and mass violence means to understand the departure point to reconciliation. This can reveal the elements of motivation, structural violence, politics and identity.

If genocidal processes, or ‘post-genocide’ are at work in the CAR, then the sooner they are evidenced and analysed the better. Genocidal violence is by and large political; when these politics are understood, non-violent platforms can then be constructed that provide a route to reconciliation and, in the case of the CAR, rebuilding important institutions and systems for human security.

Chris Davey will be a PhD candidate in Peace Studies at the University of Bradford this coming September. He previously received a Masters at Kingston University in Human Rights and Genocide Studies, and has taught in the Peace and Justice Studies Program at Utah Valley University. He currently researches mass violence and identity in the Great Lakes region.

1) Consider also the impact that Robert Kaplan’s Balkan Ghosts had on perceptions of the conflict in the Former Yugoslavia.

If you are interested in writing about peace and peacebuilding for TransConflict, then please do not hesitate to contact us by clicking here!