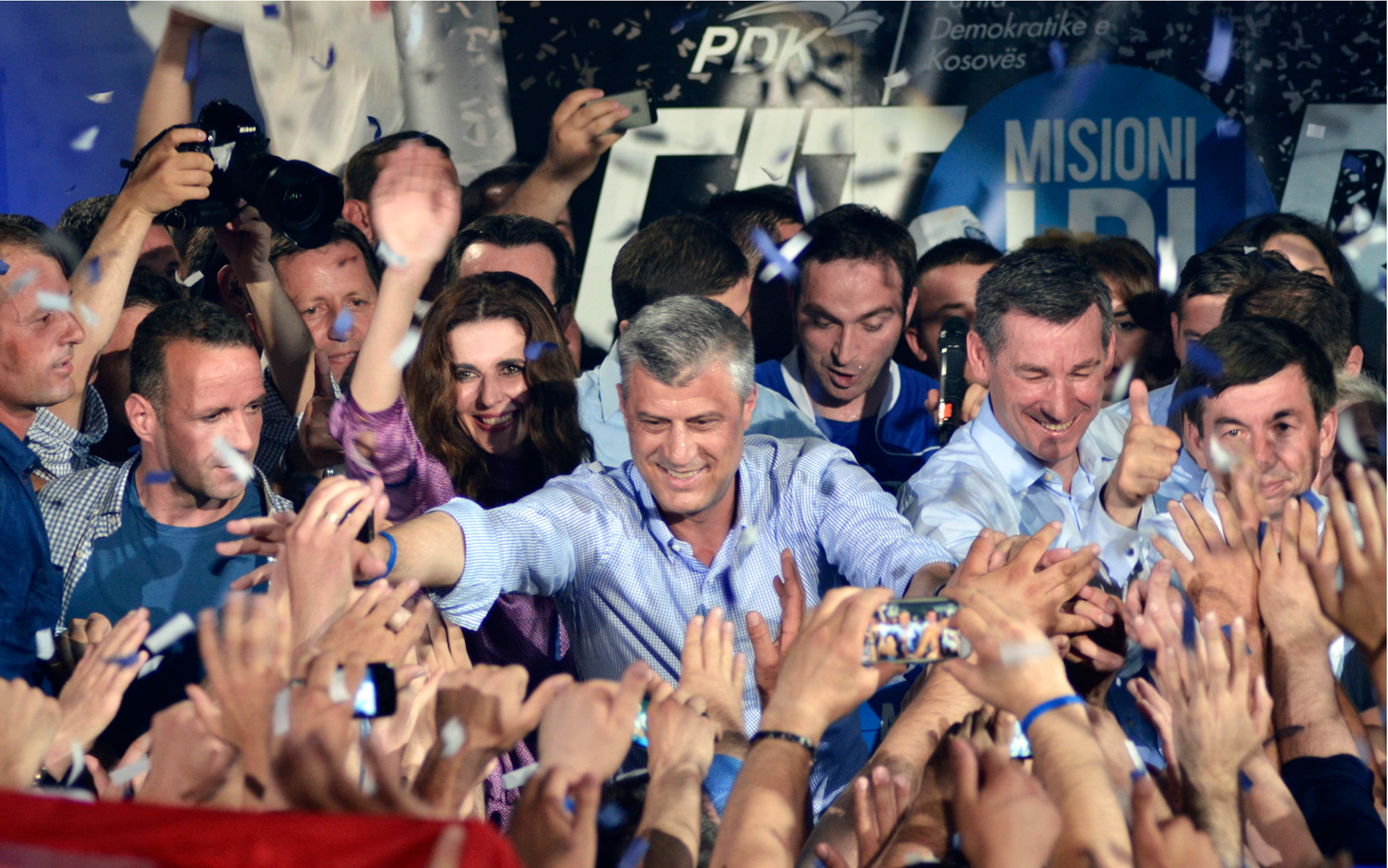 Following the parliamentary elections of June 8, a new political landscape is emerging in Kosovo. Will it be more democratic?

Kosovo’s parliament is composed of 120 seats, at least 20 of which are reserved for minorities. At elections held on 8 June the parties that represent Kosovo’s politico-economic élite won – according to preliminary, but reliable, results – 77 seats. Minority parties, most of which are aligned with the élite, obtained 28 seats. The remaining 15 seats went to Kosovo’s only left-wing party, Vetevendosje, which opposes intransigently both the élite and the governance system it has built over the past dozen years.

The parties of the élite are the political expression of Kosovo’s various economic-military-criminal power structures, mostly offsprings of the 1998–99 guerrilla formations. Although they frequently alternate each other in government and opposition, they all contributed to shaping the politico-economic system that now stifles Kosovo’s development, and they all draw rents from it, albeit in different measure. Prime minister Hashim Thaçi’s PDK party dominated this system over the past seven years, deepening its inefficiencies, and pervasively entrenched itself in the institutions.

The balance of power within the élite is as follows. PDK won 33 seats. Its AKR ally failed to reach the 5 per cent threshold to enter parliament. A new party created by two prominent figures who split from PDK obtained 6 seats. LDK and Ramush Haradinaj’s AAK, both in opposition until the elections, won 28 and 10 seats respectively. Thus Thaçi can now count only on 55-57 seats at most: PDK’s 33 deputies and 20 to 22 minority parliamentarians. To retain the premiership Thaçi planned to form an alliance with one of the other élite parties – the new party, LDK or AAK. But two days after the elections these three parties joined in an anti-PDK alliance. This changed the political arithmetic significantly, and might have brought Kosovo at a critical juncture.

If the alliance will hold, Thaçi shall not be able to form a government. But although the alliance shall certainly receive the vote of some minority deputies, it cannot form a government without Vetevendosje’s support. Thus talks are underway on the conditions under which this party would offer parliamentary support to the anti-PDK alliance. Such conditions concern the fight against corruption and a parallel suspension of the privatization programme and of talks with Serbia about north Kosovo (the subject of an EU-mediated agreement signed in April 2013), because Vetevendosje maintains that such matters should not be addressed until greater political accountability is established in Kosovo.

The alliance would be far from being an ideal steward for Kosovo. But a change in government, the emergence of a real political split within the élite, the formation of a balanced coalition, not dominated by any one of the three anti-PDK parties, and the fact that their alliance will rely on Vetevendosje’s external support will all contribute – against the long-term interests of both PDK and the alliance – to making the political system more open and pluralistic. This dynamic might be imperceptible at first, but could accelerate: especially if the international community shall not oppose it for the sake of advancing its own short-term priorities, which chiefly concern the implementation of (rather peripheral) parts of the agreement on north Kosovo. All this could remain conjecture, though: the door that now seems to be opening could be shut back, either softly or with a bang.

This implies that, once in government, the alliance will aim at taking control of the predation machine used by PDK. Their dependence on Vetevendosje shall certainly check their greed, but corruption shall continue. In parallel, PDK’s loyalists shall be replaced by alliance representatives across all critical institutions, and the alliance shall also seek to take over part of PDK’s share of the private sector. The logic of the system is such that there will be little resistance. But those who shall resist will be fought with the means that PDK itself employed: for instance, just as PDK used the prosecutors to harm or intimidate its opponents, so will the alliance. In other words, Kosovo’s system is such that the loser risks losing almost everything. And PDK will not relinquish power without a fight: it will have to be defeated, and the battle begins now.

Entirely legitimately, PDK is already trying to break the alliance. But if it will fail, as it seems likely, PDK will try to precipitate fresh elections, by preventing the alliance from forming a government and thereby provoking an institutional stalemate. And at the elections PDK will seek to obtain a higher share of the vote by manipulating the elections and their results: indeed, PDK might now be regretting having accepted US and EU demands to restrain its efficient election-fraud machine on 8 June.

The hypothesis is not far-fetched. Albeit risky, this is a realistic plan because PDK controls the institutions. It can influence both arbiters of the game in this delicate phase – the president and the constitutional court – and thus obtain fresh elections, and it can manipulate the elections because it controls the electoral commission, the interior ministry, the police, the judiciary, and much of the media. Of course PDK might not succeed in distorting the elections results in sufficient measure, or else fraud might have to be so blatant and excessive as to provoke demonstrations, or even an uprising. Still, despite these risks, trying this route would be a rational decision for PDK, faced with the prospect of losing power.

Let’s now focus on the first step of this plan – obtaining fresh elections – in order to check, in course of the next two or three weeks, whether PDK has indeed chosen to follow the route I just outlined. If so, Kosovo’s citizens will know what to expect.

The constitution allows only two attempts to form a government after the elections, after which the parliament must be dissolved and fresh elections called: this is the lever that PDK shall seek to use. The issue turns on two hotly debated provisions. The first one provides that, after the elections, the president appoints a prime minister “in consultation with the political party or coalition that has won the majority in the Assembly” (article 95.1). The second one provides that if the first candidate fails to obtain a majority the president “appoints another candidate” (article 95.4). If this second candidate also fails, elections must be called.

PDK contends that 95.1 refers to pre-election coalitions only. The alliance argues the opposite. I think that PDK is right, for both textual considerations – the word ‘won’ seems to refers to pre-election coalitions, not post-election alliances – and systematic reasons: this provision seems to be aimed at respecting the presumable will of the electorate. So PDK should have the first go at forming a government. But, as things stand today, it will fail. What next?

Here PDK argues that 95.4 requires the president to pick also the second candidate from the party or coalition that won the largest share of the vote. This interpretation makes no sense, for both logical reasons – if the main PDK candidate failed to obtain a majority, why should the second-best PDK candidate succeed? – and systematic ones: as the president has a duty to ensure the survival of the parliament for its full four-year term, she must appoint the person who is most likely to obtain a majority, not a person who is almost certain to fail. Clearly, the adjective used by 95.4 – “appoints another candidate” – means that the second candidate must not just be a different person, which goes without saying, but must also represent a different political option. It follows that the president cannot appoint a PDK, or PDK-proposed, person as the second candidate: if she did so she would breach the constitution. In principle she is free to choose anyone who is likely to obtain a majority: but the existence of the anti-PDK alliance effectively removes her discretion, because – if the alliance will hold – none else but the alliance’s candidate will be able to form a government. At the second attempt, therefore, she must appoint this candidate.

Another provision is being debated in Kosovo. It is article 84.14 of the constitution, which, without distinguishing between first and second attempt, states that the president must appoint a candidate for the post of prime minister “after proposal by the political party or coalition holding the majority in the Assembly”. Whatever such the small differences between this text and that of 95.1 may mean, however, relying on this provision to solve the problem at hand would be entirely mistaken because article 84 is nothing more than a list of the powers of the president, each item of which refers to those other provisions of the constitution where such powers are regulated – and limited – in detail. Article 84.14, therefore, is but a reference to the president’s powers under article 95: one should read its text as though it said “the president appoints the prime minister as provided in article 95”. The text of article 84.14 is not binding, therefore, and it is not really a legal provision: it is like an entry in an index, and therefore has nothing to say on who, today, should be appointed prime minister. In a recent essay on the performance of Kosovo’s constitutional court, I illustrate how its judges and a previous president misused another item of article 84 – item 9 of the list, whereby the president “may refer constitutional questions to the Constitutional Court” – and how, in a subsequent judgement, the constitutional court flatly contradicted itself on this point.

In the hands of Kosovo’s institutions, however, article 95 could end up meaning very different things from what it says. If PDK shall so request them to do, both the president and the constitutional court – which is genuinely and consistently subservient to the élite, as I concluded in that essay – are likely to say that also the second mandate is to be granted to PDK. If this will happen Kosovo’s citizens will know that PDK is pursuing the plan I conjectured above. This would be a soft coup, which will merit an equivalent reaction by anyone who cares about the democracy of this country.

A first signal that PDK and the president are preparing to implement a coup emerged the other day, when the president again misused that same provision – article 84.9 – to request the constitutional court’s interpretation on who should be granted the mandate to form a government: this gives the court the opportunity to issue a ruling that will breach the constitution but will satisfie PDK’s demands. But although Kosovo accepted silently the election fraud of 2010, recent signs suggest that public opinion might react to this soft coup.

Thus PDK risks defeat whether it will comply with the rules, or whether if it will seek to bend them: either way, the words ‘political accountability’ will start to have a clearer meaning in Kosovo. Western diplomats in Pristina might be tempted to assist PDK’s plans, in order more easily to obtain progress on north Kosovo and the dialogue with Serbia. I trust that their capitals shall not allow this to happen, which would be a disgrace and a grave mistake: may they allow this polity to become more democratic instead, and this shall gradually solve north Kosovo too.