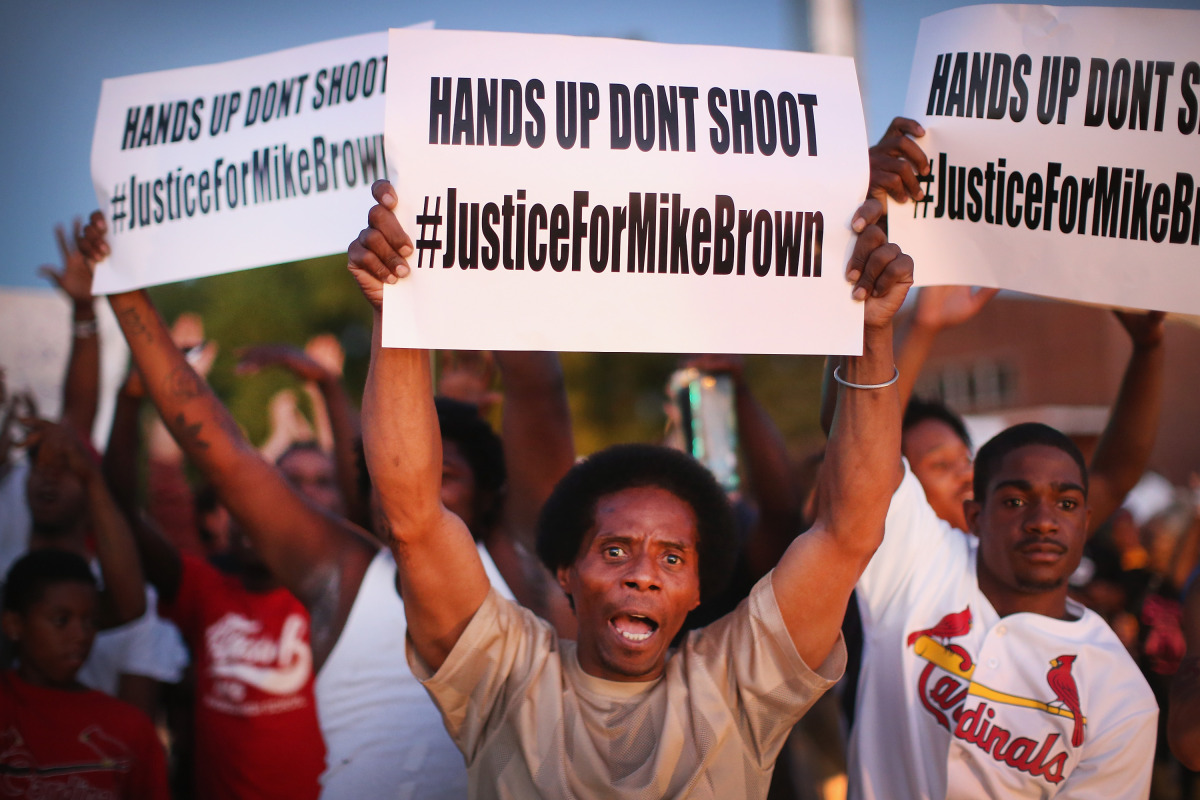 The bottom line is not that democracy is dead or activism is pointless, but that the accelerating decline of Western power creates unlimited possibilities for different forms of politics and the organization of power—to include forms that will look more like traditional structures than the fantasies of liberal, secular, or anti-Capitalist thinkers.

The killing of an unarmed teenager by police in Ferguson, Missouri is causing another wheel to fall off the American construction. The incident is awful in itself—a largely white police force acting at a level of violence high enough to provoke a community to hit the streets in an understandable—and appropriate—expression of rage.  The incident and its aftermath has led mainstream American media to juxtapose editorials and photos related to it with similar images of brutality related to the civil rights struggles of the 1960s.[1]

This comparison actually understates the problem.  The very different social climate now than a half century ago puts in high relief the coming apart of the social cohesion necessary to any country’s internal functionality and external power.  During the 1960s—no matter the rhetoric of the Black panthers, Weather Underground, and other radical elements—the  dominant social narrative was shaped around doctrines promoted by Martin Luther King, various liberal public intellectuals and media figures, and the towering political presence of Lyndon Johnson.  These figures told America it would overcome its history of slavery and racism and craft a higher sense of unity in diversity as part of an integrating national community.  Not even the pointless, divisive involvement in Vietnam derailed the civil rights project of that era (even though King’s opposition to that War stemmed at least in part from the fear it would do so).

The idea that there is a We that would overcome the sins and crimes of our own past does not exist now.  Even Malcolm X, King’s vocal and most effective critic, would not be radical enough for the ideologues that are undermining the American project.  The small group that constitutes an insignificant Left, and the much larger, better financed and organized, and politically significant Right both are cursing the specter of overly armed local (and not just local) government capable and determined (so this narrative goes) of yanking away “our freedoms.”  For the Right especially, it is essential that individuals exercise their Second Amendment rights and collect whatever weaponry they want for whatever purpose they desire—incidents of mass murder of school children or theater patrons should not distract from the overriding importance of having as many guns in as many hands as possible.  The presence of the same armament in the arsenal of what once were considered duly constituted law enforcement—on the other hand—now is looked upon as perhaps the central threat to a free society.

It should be understood that the powerful, anger-fueled trend to discredit government authority and legitimacy amounts to nothing less than a reopening of the debate over the ratification of the Constitution.  The people who claim they, as “We the People” are defending that document as the founders wrote it actually are working hard to undermine its purpose—which was the creation of a stronger federal government than the dysfunctional one existing under the auspices of the Articles of Confederation.  Liberal and academic critics of the so-called “Tea Party”[2] have done a major disservice by conceding to these reactionaries (they are in no way “Conservatives”) ownership of the iconic slogan of 1773.  Instead, they should be holding them accountable for their version of the historically analogous arguments of 1788.[3]  The current Right does not reflect the views of the American founders; George Washington led troops against their historical predecessors during the Whisky Rebellion of 1794.

There is an inverse relationship between the latter-day trend in the US to celebrate its “warriors” and the actual legitimacy of US power and governmental authority.  A Homeric invocation of US troops would not have gained currency before 1947—not even among paladins of the post-Civil War Grand Army of the Republic  Until the end of World War II, the United States maintained a very small peacetime military and had relatively little interest in the ebb and flow of geopolitics.  On the other hand, police forces in American cities and towns often were integral representatives of local rural society, or else served as the honored arms of the moneyed interests who controlled urban governments.  The prevailing ethos of American life touted the cop on the beat as a welcome and necessary part of community, while a permanent professional soldiery conjured the image of government tyranny that was behind the Second Amendment in the first place.

Things are very different now.  Soldiers are celebrated as American heroes just for wearing the uniform.  You can’t go to a baseball game without standing to honor the troops (not just the national anthem).  There is no question that the reputation of the police suffered during the turmoil of the ‘60s, but the consensus now between Right and Left—and timidity of the Center in the face of this consensus—that law enforcement and other arms of government are illegitimate and dedicated to taking away “our freedoms” is more deeply corrosive than the much shallower (if noisy and well-covered) demonstrations of the 1960s and 1970s.

Democracy in America (and Europe) looks weaker than at any time since the 1930s.  If you do not believe this, take a look at the latest issue of Foreign Affairs (September-October 2014), the preferred periodical of the traditional foreign policy cognoscenti.  Once known for its Olympian elitism, it has overhauled its format and look and now is publishing what—in terms of that magazine—passes for jeremiads on American decline.  These are likely to be rebutted in subsequent issues by those clinging to the tattered idea that only the US can lead the world, but the attention of the conventionally wise to ideas some of us have been proposing for years is worth taking note of.

For those outside the US, the message should be that the US is no longer strong enough, self-confident enough, or well-led enough to manage its plethora of global interests.  Anyone with a clear focus and ability to match resources to priorities and can face down a superpower lacking those things.  They already know this in the Middle East—Secretary of State Clinton was consistently off balance and out of touch during the risings of 2011; her successor has been virtually irrelevant to cascading problems in Syria, Iraq (even with the air strikes), and Gaza.

For the Balkans, this means the usual teleological rhetoric about elections, political parties, constitutions, rule of law, and other forms of democracy offer no solutions to what continues to be an unstable post-Yugoslav political constellation.  Debates on this website and elsewhere over, say, whether Bosnia needs constitutional reform are irrelevant.  Breathless discussion of islands of non-nationalism by local activists amounts to whistling in the dark—claiming that anecdotal performances against supposedly illegitimate nationalism can lead to multi-communal integration is something like believing the behavior of animals in zoos predicts the behavior of a species as a whole.

The bottom line is not that democracy is dead or activism is pointless, but that the accelerating decline of Western power creates unlimited possibilities for different forms of politics and the organization of power—to include forms that will look more like traditional structures than the fantasies of liberal, secular, or anti-Capitalist thinkers.  Those among the latter groups able to combine their priorities with old-fashioned “kinetic” forms of action are likely to fare better than those who do not.

2) See, for example, Jill Lepore, The Whites of Their Eyes:  The Tea Party and the Battle over American History, (Princeton, Princeton University Press, 2010)