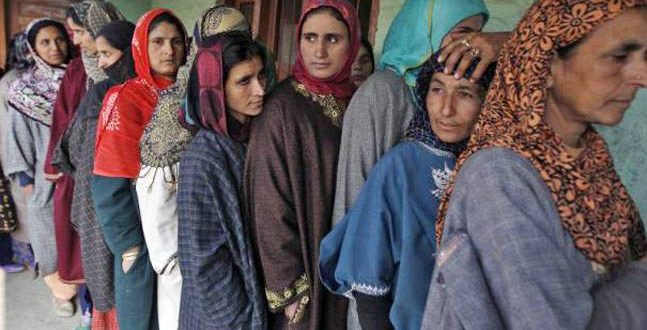 We need to work together to put together a foreign policy for these people and especially, women, in Kashmir who have faced unforgettable horrors. We need to ensure their safety and human rights irrespective of who rules Kashmir.

If you say the word Kashmir, the first thing that comes to mind is the India-Pakistan conflict; a lost, hopeless cause, which might never be resolved in our lifetime. While we manage to shove it to the back of our minds we forget those who are actually living the stories we hear about.

We ought to have more of a humane perspective rather than just a political and geographical perspective about Kashmir. As of 2011, there were about 12.55 million people living in Kashmir- that is 12.55 million people living in fear and conflict. In recent years, the number of terrorist-related deaths have been increasing. Jammu and Kashmir Chief Minister Mehbooba Mufti said, “Dialogue with Pakistan is necessary if we are to end the bloodshed. The people of J&K are suffering. We have to talk because war is not an option.”

We cannot keep prolonging talks with Pakistan while the lives of millions of innocents remain in the balance. We cannot keep throwing numbers and statistics of the lives lost, injured or hurt to the media either. Try to imagine this – “You wake up, but you aren’t sure whether you will live through the day and see tomorrow. You might want to step out of the house for a walk, for a job, for a purpose, but aren’t allowed to because there is curfew. You grow used to the sound of announcements and your heart quickens when you hear a sudden bang or a blast and then life is soon back to normal, the normal that you have learned to accept as fate, the fate you make yourself believe.”

So far, we have been looking at Kashmir as this common entity – a group of people living in terrible conditions. If we take the time to look closer, we realise that though they are bound by the common misfortune of living in terror, each one of them lives separate lives. They are people of different classes, of different races, of different genders, of different abilities, of different economic strata, of different social strata. Will just a few discussions about Kashmir be able to solve the multiple issues that arise as a result of the interrelation of all these factors?

Whilst facing communal violence and the effects of domestic terrorism, it is needless to say that women suffered to a much larger extent. In the horrifying Kunan Poshpora incident in 1991, personnel of the Indian Army, while carrying out an anti-insurgency operation, “allegedly” gang raped 23 women. The women’s reports were not believed and the army passed off the charges as attempts to defame them. The book ‘Do You Remember Kunan Poshpora?

‘ – published by Zubaan Publishers as a part of its eight-volume series on “Sexual Violence and Impunity in South Asia” describes the horrors that the women faced. Of the 23 women, six of them have passed away while 17 still hope for justice. This is an example where women were victims of gender-based violence due to patriarchy and violence coming from a place of authority and impunity that the army used as its defence.

In another example, Kashmiri Pandit women faced atrocities in the name of ‘ethnic cleansing’. The Kashmiri Pandits were the original inhabitants of the Kashmir Valley. While some of them moved out of the valley due to land reforms by the Buddhists, first, and then the Mughals, they were forced to leave in much larger numbers during the 1990s. Religious rivalry between the Muslims and Brahmins resulted in an upper hand of the Muslims. Radical Islamists and militants to either convert to Islam, leave the land, or die – Ralive, Tsaliv ya Galive. Those who opted to leave the country were told to leave their women behind. The Kashmiri Pandits were stranded in the midst of violent mobs. In an attempt to force them to flee from the valley, the Muslims resorted to broadcasting songs and jehadi sermons that could frighten even the bravest soul:

A large number of women were left abandoned and widowed. Author and Journalist, Rahul Pandita, created a timeline of events in his book- ‘Our Moon Has Blood Clots

‘, where we come to know of the hundreds tortured, killed and raped. In 1998 Kashmiri women and children were shot in cold blood. The women were once more targets of gender-based violence due to religious and caste differences.

There have been gross violations of human rights in Kashmir, repeatedly. Kashmiris have been kept in custody, subjected to assault and mass killings. People were killed on the basis of mere suspicion without proof or trial or a chance to defend themselves. Muslim women, in particular, have suffered rape and sexual abuse from members of the Indian army. Scholar Seema Kazi notes that rape was used as a weapon of war by the state against the population. (Between democracy and nation: Gender and militarisation in Kashmir. Diss. London School of Economics and Political Science (United Kingdom), 2008.) Due to the Armed Forces (Special Powers) Acts (AFSPA), the army Border Security Personnel and Central Reserve Police Force have been shielded from prosecution in spite of committing heinous crimes against thousands of innocents and extra-judicial killings.

Renita Siqueira is a writer and analyst.