At a second working breakfast, organised on 22nd November as part of the project ‘Understanding and combating extremism in Serbia’, TransConflict had the pleasure of hosting Mr. Marko Savković and Mr. Saša Đorđević, researchers from the Belgrade Centre for Security Policy (BCSP), who addressed the participants on the topic of violence in sport.

In their respective presentations, entitled “Sport in Serbia as the Venue for Violence: Contexts, Forms, Prevention and Repression” and “Prevention of Violence at Sport Events”, Mr. Savković and Mr. Đorđević problematised the issue of increased violence in sport and posed the question as to whether sport without violence is possible in Serbia.

As Mr. Savković has argued, “any sport event presents us with a unique space for socialization. However, the decision whether to surrender to violence or simply join the triumphal atmosphere of victory is made on an individual level. In Serbia, due to the events of 2009 – i.e. the tragic death of French football fan, Brice Taton – and 2010 – the riots after the first Belgrade Pride – a lot of time and effort was spent on debates on how to suppress violence. In the meantime, however, the character and scale of violence has significantly evolved.” 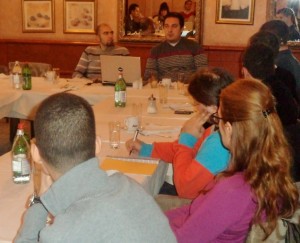 Though violence and hooliganism are almost exclusively associated with football, a specific ‘quality’ of Serbian hooliganism is that it has now spread to other sports traditionally perceived as ‘non-violent’, such as water-polo, basketball and handball.  What is most disconcerting is that a growing number of incidents has been observed at matches played by junior teams, caused by parents and coaching staff. However, what makes Serbian hooliganism different from its manifestations elsewhere is its specific context, which emerged as a legacy of ethnic conflicts and was preserved until now due to the absence of efficient law enforcement mechanisms.

In Serbia, sport arenas serve as an alternative political space for the articulation of ideologies and extreme political stances, whilst well-organised and hierarchically-structured fan groups are led by individuals with criminal pasts and openly chauvinistic attitudes, such as ‘Naši’, ‘1389’ or ‘Obraz’. 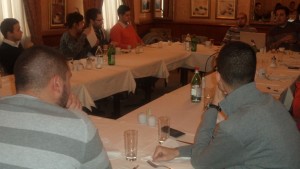 As the results of a recent survey, “Serbian Citizens on Security” – conducted in the form of focus groups, with the assistance of the Centre for Free Elections and Democracy (CeSID) – have demonstrated, most individuals who took part in focus groups believe that violence is a justified expression of dissatisfaction with the general state of society. Another dimension revealed by the research  is that political orientation plays an important role – i.e. violence-prone individuals mostly have a conservative, deeply-traditional outlook. What unites them is hatred towards the lesbian, gay, bisexual, and transgender communities and strongly-expressed ethnic distance towards Roma, Albanians and Bosniaks.

Whilst in some countries – most notably, Germany, Belgium and the Netherlands – practitioners resorted to alternative measures in order to suppress and reduce instances of violence, a number of obstacles prevent sports authorities in Serbia from implementing similar solutions. Some models which proved to be successful in other countries – such as cooperation between fans and their associations, as well as between clubs and law enforcement officials, or the introduction of a Code of Conduct – could also be applied in Serbia; however, the competent authorities first need to make a significant investment in the infrastructure of sport facilities and, even more importantly, they need to exclude offenders from fan groups, which requires more swift action on the part of the courts and the judiciary. 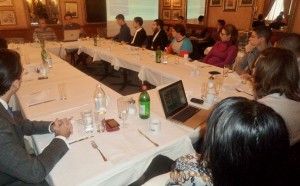 Mr. Savković and Mr. Đorđević both emphasised the need to increase efforts invested in working with children and adolescents in order to positively influence changes in the popular mind-set concerning the role of fans in sports, and the need for a more systematic response to violence by the competent institutions, as well as by other relevant actors, including educational institutions, civil society and media.

The project, ‘Understanding and combating extremism in Serbia’ – which gathers representatives of parties from across the political spectrum, civil society organizations, academics and the media – will be comprised of a series of other discussions on a range of topics, including transitional justice and religious fundamentalism.

During the first breakfast meeting, Goran Tepšić and Mladen Stojadinović – from the Center for Peace Studies (Centar za studije mira) at the Faculty of Political Science in Belgrade – addressed the audience on the issue of political extremism, ethnic stereotypes and national myths.

The participants also undertake trainings on advocacy campaign cycles, delivered by Srećko Šekeljić. The goal of the training programme is to help the participants understand and utilize a strategic approach to advocacy campaign development and management, thereby improving the quality of advocacy responses to instances of extremism; whether they be, for example, cases of violence or racism in sport, hate speech directed towards ethnic minorities or instances of political extremism.

To learn more about the project, Understanding and combating extremism in Serbia, please contact TransConflict by clicking here.