Vladimir Ninković, a project officer for security at TransConflict Serbia, emphasised that the vast majority of modern extreme right-wing movements and parties in Europe were extremely secular, especially those anti-immigration. In the US, for instance, there is a rough division between the so-called Christian patriotic and the racist right; a division that has been proposed by experts for Serbia. However, Mr. Ninković pointed out that the genesis of the modern extreme right is different, having been greatly-influenced by the inter-ethnic conflicts of the nineties. Neo-Nazi groups are few in number and generally unpopular – such as Blood and Honour, and National Front – whilst the clerical/traditionally-focused right is much more prominent. The Serbian case parallels well with that of with Russia, which, in turn, has a relatively long tradition of extremism on both sides of the political spectrum. 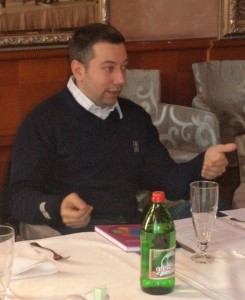 Vladimir Ninković, a project officer for security at TransConflict Serbia

What needs to be distinguished, in Mr. Ninković’s view, is the culture or subculture of the far right – a level that produces the core values and ideas, social movements, and then, finally, the political parties. The violent disposition of a minority of members or sympathizers of the radical right tends to derive from personal psychopathology, rather than by its values and beliefs. In cases of open confrontation, however, those with violent predispositions often act in the most violent way possible. 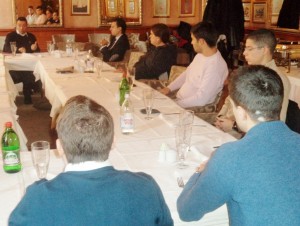 For Mr. Ninković, while hate crimes are relatively easy to define, terrorist acts are not. Many experts define terrorism as “the unlawful use or threat of force or violence against individuals or property to intimidate or persuade governments or societies to achieve political or ideological objectives.” So, besides the classical terrorist act, this definition emphasizes the creation of a climate of fear through the perceived risk of any potential violence; something many organizations in Serbia have managed to achieve. A too strong or too weak state response, however, may accelerate the process of radicalization. A weak response can be interpreted as tacit encouragement; whilst overreactions can escalate anger and hatred, especially when inconsistent and vague. Mr. Ninković concludes by saying that the right balance is often not easy to find.

During the first breakfast meeting, Goran Tepšić and Mladen Stojadinović – from the Center for Peace Studies (Centar za studije mira) at the Faculty of Political Science in Belgrade – addressed the audience on the issue of political extremism, ethnic stereotypes and national myths. TransConflict also had the pleasure of hosting Mr. Marko Savković and Mr. Saša Đorđević, researchers from the Belgrade Centre for Security Policy (BCSP), who addressed the participants on the topic of violence in sport. Finally, Gordana Igrić, the regional director of the Balkan Investigative Reporting Network (BIRN), and Nemanja Stjepanović, from Sense Agency, spoke about the challenges of transitional justice in the former Yugoslavia.

The participants also undertook trainings on advocacy campaign cycles, delivered by Srećko Šekeljić. The goal of the training programme is to help the participants understand and utilize a strategic approach to advocacy campaign development and management, thereby improving the quality of advocacy responses to instances of extremism; whether they be, for example, cases of violence or racism in sport, hate speech directed towards ethnic minorities or instances of political extremism.

To learn more about the project, ‘Understanding and combating extremism in Serbia’, please contact TransConflict by clicking here.