TransConflict yesterday launched its new project, entitled ‘Understanding and combating extremism in Serbia’, which is designed to improve understanding about – and formulate responses to – extremism in Serbia by engaging representatives of parties from across the political spectrum, civil society organizations, academics and the media.

In the opening discussion, Goran Tepšić and Mladen Stojadinović – from the Center for Peace Studies (Centar za studije mira) at the Faculty of Political Science in Belgrade – addressed the audience on the issue of political extremism, ethnic stereotypes and national myths.

British historian, Eric Hobsbawm, called the “short” twentieth century (1914-1991) as the “age of extremes” and, as Goran noted, from the destruction of Europe by Fascism, Nazism and Communism, to the extreme nationalism of the nineties, “the twentieth century was marked by political extremism”. Despite the so-called ‘end of history’ proclaimed by Francis Fukuyama, the nineties did not see the end of political extremism; instead, the beginning of the twenty-first century will be remembered for the rise of Islamic fundamentalism and the spread of neo-liberal ideologies.

Goran defined political extremism as any political ideology which includes extreme viewpoints, including discrimination against members of certain social groups and their associated dehumanization, which often serves to justify the use of violence in order to achieve particular ends. Goran noted that the political ideology of extremism is usually based on religion or national (quasi-) histories. Thus, for example, racism and anti-Semitism – two common elements of political extremism – are often justified through interpretations of the Bible; whilst particular historical events – be it wars, battles and, in particular, the loss of the territory – are often associated with threats to national identity. 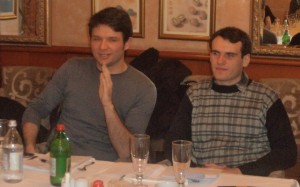 Extremism is often seen as a reaction to a perceived threat, fear, injustice, anger, guilt, shame or humiliation. The prime example of this is Nazism, whose rise was largely conditioned by the international system created after World War I and the defeat of Germany, plus the imposition of a “humiliating peace” by the Allies.

Goran concluded by arguing that political extremism often leads to extreme behavior and violence, the prevention of which requires a necessary confrontation with extreme views expressed in the public and political sphere.

Mladen Stojadinović went on to discuss a research project, entitled “Ethnic stereotypes and national myths as an obstacle to reconciliation: Serbian-Albanian relations”, which analyzed the stereotypes, generalizations and simplifications that afflict both Serbian and Albanian history textbooks. Both provide polar opposite views of their respective histories, grounded in biased and incorrect accounts.

Such stereotyping – as Mladen explained – can ultimately serve to legitimize violence and conflict between peoples. The research found that Albanian textbooks contained five times more stereotypes than Serbia ones. Both textbooks, however, use the same terms to describe the other – accusing them of being violent and discriminatory, whilst the Albanian textbooks demonstrated a tendency to describe the Serbs as genocidal. 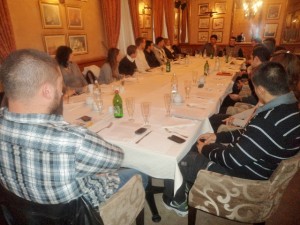 Participants from political parties, civil society and the media

With respect to Kosovo, for instance, Albanian-language textbooks describe how it has been Albanian territory since the Fourth Century BC; whilst Serbian-language textbooks describe Kosovo and Metohija as Serb holy land, where they had been the majority population until expelled by the Ottomans and Albanians. Whilst Albanians claim Milos Obilic as their own hero (referring to him as Milos Kopiliq), Serbs claim that Skenderbeg was in fact a Serb.

The project, ‘Understanding and combating extremism in Serbia’ – which gathers representatives of parties from across the political spectrum, civil society organizations, academics and the media – will be comprised of a series of other discussions on a range of topics, including transitional justice, violence in sports and religious fundamentalism. The participants will also undertake trainings on advocacy campaign cycles, with the overriding objective of improving advocacy responses to instances of extremism.

To learn more about the project, Understanding and combating extremism in Serbia, please contact TransConflict by clicking here.