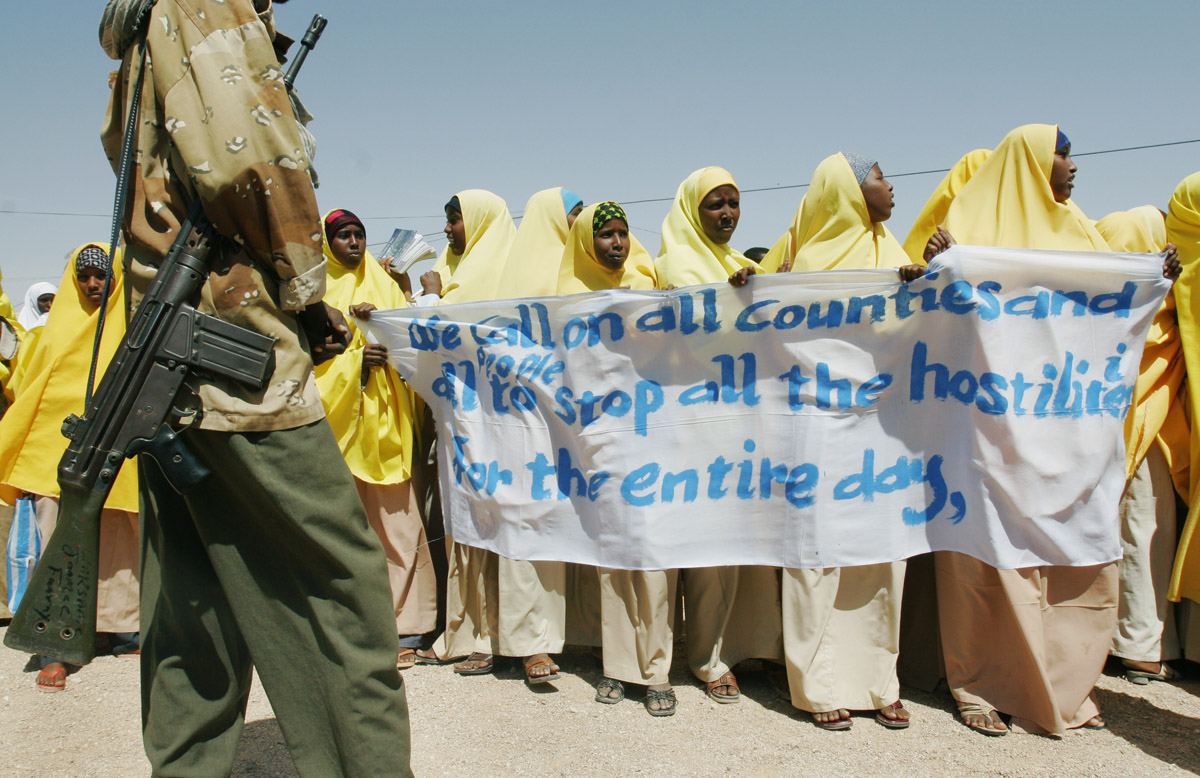 Despite the great strides they have been made in cementing peace in Somalia, women remain marginalized from such processes. As such, the forgotten heroines of peacebuilding need to be further empowered to play a greater role in conflict transformation.

Despite the vital roles played by women in the democratisation and state-building processes, their male counterparts hardly recognise their role. Women have always had a strong stake in democratisation and peacebuilding processes (UN, 2013). Democracy requires that citizens’ interests be heard and deliberated upon. Democracy therefore needs women in order to be truly democratic; and women need democracy if they are to change the systems and laws that preclude them, and preclude societies as a whole, from attaining equality (UN, 2013).

Article 7 of the Convention on the Elimination of All Forms of Discrimination against Women (CEDAW) reiterates the importance of women’s representation in the political life of their countries, emphasising the right of women “vote in all elections and public referenda and to be eligible for election to all publicly elected bodies” and to “participate in the formulation of government policy and the implementation thereof and to hold public office and perform all public functions at all levels of government” (Freeman et al, 2012) The role of women in democratic processes is further emphasized in the UN General Assembly’s 2011 resolution on Women’s Political Participation (UN, 2013). It reasserts that there is a greater need for women to actively participate on an equal basis at all levels in order to achieve equality, sustainable development, peace and, most of all, democracy (UN, 2013).

Despite these normative advances – and as universal as these goals are – they nevertheless remain elusive for many women. Women are still under-represented in elected positions and most countries are far from reaching the 30% critical mass proposed by the 1995 Beijing Platform for Action (Nussbaum, 2005). Political institutions – from political parties to electoral commissions – often lack the capacity to ensure that women’s interests are articulated and addressed in public policy (Shapiro, 1999). The lack of access for women to democratic institutions and processes is most evident in post-conflict settings.

UN Security Council Resolution 1325 calls on member states to increase the representation of women at all levels of decision-making. In response, the United Nations Departments of Peacekeeping Operations and Field Support intervenes’ to facilitate women’s participation in political processes and women’s inclusion in governance structures in countries where peacekeeping operations are deployed (UN,2013).

Preventing the perpetuation of gender injustice

According to Strickland and Duvvury (2003), there has been a slow but positive shift in international opinion and understanding about the consequences of conflict on women, and the importance of their participation in peacebuilding processes and post-war transformation. However, gender discrimination continues through political exclusion, economic marginalization, sexual violence (both during and after the war), a denial of basic human rights and constraints on their development potential.

Women individually and collectively contribute to peacebuilding in many ways; yet, their contributions are often neglected because they take avant-garde forms, occur outside formal peace processes or are considered extensions of women’s existing gender roles (Baranyi, 2008).

War and its aftermath affect women’s lives and men’s lives in different ways. Addressing gender norms is critical since they so strongly influence women’s options for action (Duvvury and Strickland, 2003). Whilst the temporary loosening of gender roles that often accompanies war can bring opportunities for innovative efforts by women to build peace, sustainable peace also requires a more permanent transformation of social norms concerning violence, gender and power.

Given these immense roles, there is a need to fully empower women to continuously realise their potential. This requires addressing policies, practices, ideas and beliefs that perpetuate gender inequality and prevent women and girls from enjoying decent livelihoods, public participation, protection and basic services (Baker, 2006). There should be an obligation to seek and ensure the full participation and empowerment of women in all areas of work, whilst promoting women’s rights as human rights, particularly in the areas of abuse and violence. Gender awareness and understanding should be used as a criterion for any peacebuilding and sustainable developmental initiatives. Intensive and extensive advocacy should emphasizes the importance of gender equality, plus social and political integration (Baker, 2006).

Integrating women into socio-economic and political processes is one of the main ways of empowering them. Coordinating global and national efforts to integrate women into poverty reduction, democratic governance, crisis prevention and sustainable development is therefore of prime importance. There is a need to ensure that women have a real voice in a variety of domains – from the judiciary to the civil service, as well as the private sector and civil society – so they can participate equally in public dialogue (UNDP, 2013). Focusing on gender equality and women’s empowerment are therefore an important pathway to achieving the Millennium Development Goals.

Women’s empowerment needs to also extend to the economic domain, with a systematic combination of three factors – micro-finance, entrepreneurial culture and education, and economic freedom – crucially important in this regard (Majumdar, 2005). This is not just a question of equity or fairness. Involving women in peace talks improves the quality of agreements reached, whilst involving women in post-war governance reduces the likelihood of a return to war (Varisco, 2010; Steinberg, 2003). Reconstruction works best when it involves women as planners, implementers and beneficiaries.

Increasing the number, effectiveness and popular support of women civic leaders, voters, candidates, political party representatives and elected leaders is indispensable to making institutions more responsive to citizen’s needs (Shukla, 2007; NDI, 2013).  The importance of including women and women’s voices in peace negotiations, transitional governments and political processes is critical to the stability of emerging democracies, and is indispensable for the Somali woman to help shape the peacebuilding in the country.

Rebuilding a country after war is about far more than repairing damaged buildings and re-establishing public institutions. Fundamentally, it is about restoring people’s trust and confidence in governance systems and the rule of law, rebuilding relationships at all levels, and providing the population with greater hope for the future. These processes are all critical to the consolidation of peace and security in fragile post- war situations.

According to the Institute for Inclusive Security (2013), within security institutions, women make fundamental contributions that help achieve broad mission objectives. There is evidence that uniformed women are more likely than their male colleagues to de-escalate tensions, and less likely to use excessive force. Female police, border guards and military officers can also perform critical duties that may be difficult for men due to cultural reasons. Such duties may include searching women at security checkpoints (Institute for Inclusive Security, 2013; Ramsbotham et al, 2011).

Women are often uniquely able to reach out to, and communicate with, women in the local community, police and military, allowing them to gain a fuller picture of the entire community’s needs. They can learn about the nature and extent of gang violence and recruitment, human trafficking, intimidation and extortion by organized crime groups, drug use in schools, and much other challenges (Ramsbotham et al, 2011). Increasing the number of women police officers also improves responses to crimes involving domestic and sexual violence; amongst the most prevalent crimes in post-war societies (Institute for Inclusive Security, 2013).

Women are proficient at mobilizing diverse groups for a common cause. They often work across ethnic, religious, political and cultural divides to promote peace. In 2002, Colombian women’s groups united into a common consensus when the government broke-off formal negotiations with rebels of the Revolutionary Armed Forces of Colombia (FARC) and began a major armed offensive. Women responded by mobilizing 40,000 marchers against the war (Institute for Inclusive Security, 2013).

In Liberia, Leymah Gbowee and others organized Christian and Muslim women to pressure warring parties into the 2002 negotiations that ultimately ended years of horrific war (Institute for Inclusive Security, 2013).

Despite the fact that women have partly been excluded from formal power structures, they are typically perceived as being less threatening than men. This perception means that, paradoxically, they frequently have a kind of access that is denied to male leaders. For example, in Somalia, women are able to move physically between clans with a freedom that men do not have. During war, these Somali women have sometimes served as vanguard diplomats and mediators (Khazem and Cherman, 2002; Institute for Inclusive Security, 2013).

In Uganda, Betty Bigombe secured  unprecedented access to the leader of the rebel Lord Resistance Army, Joseph Kony, in the nineties, although she was a government official. After the military failed to defeat the rebels, she risked death to negotiate with Kony and to try to convince the guerillas to lay down their arms. She initiated contact with Kony’s commanders through women associated with the LRA and built trust in order to get a meeting with Kony himself (Colletta and Cullen, 2000).  Due to their unique roles and access, women are often particularly well-placed to get a negotiation process started and keep it moving forward.

In as much as there are women who have fuelled conflicts, there are those who have understood the calamity that has befallen their communities and have acted as genuine peace promoters, aspiring to end the violence and transform their communities. Among the women who have dedicated their lives in advocating for human rights in Somalia is Mariam Hussein Awreeye, founder of the Ismail Jimale Centre for Human Rights in Mogadishu. Through her organization, Mariam has monitored and recorded human rights violations so that the perpetrators could be brought to justice once legal institutions were put in-place.

In the quest to help build peace and empower women in Somalia, several women have lost their lives. Among those are Starlin Abdi Arush, who died in Nairobi in October 2002 when shot by unknown gunmen; Mana Abdirahman Suldan, who died of cardiac attack in December 2007, and Verena Karrer, gunned down in Merka in February 2002 by militiamen who entered her compound. All three dedicated their lives to improving the condition of children and women in Merka, southern Somalia (Mohamed and Hoehne, 2013).

In Somaliland, women played important roles in the local and regional peace processes throughout the nineties, through which local clans were reconciled. These peace conferences laid the foundations for political reconstruction in the region. In August 2001, when tensions between president Mohamed Haji and Ibrahim Egal, and some high-ranking traditional leaders flared up, Hargeisa Women Community published an open letter in a local newspaper demanding that the two sides “avoid all steps that endanger the peace of the country and give a chance to Somaliland enemies” ( Bradbury, 2008).

Even though women and girls have been disproportionately affected by armed conflict, whilst their efforts to mitigate these conflicts have been fundamental, they have been side-lined from formal peace negotiations.  In this light, women in Somaliland have been viewed as the cornerstone of peacebuilding processes for more than two decades. Therefore, to ensure they realise their potential there is a need to enhance their political, social and economic empowerment, particularly in conflict transformation and peacebuilding initiatives. Women should be further encouraged to work closely with international and national partners on the UN’s global policy agenda on Women, Peace and Security, supporting implementation of UN Security Council Resolution 1325. If these opportunities are provided, women will leave a discernible mark on peacebuilding processes.