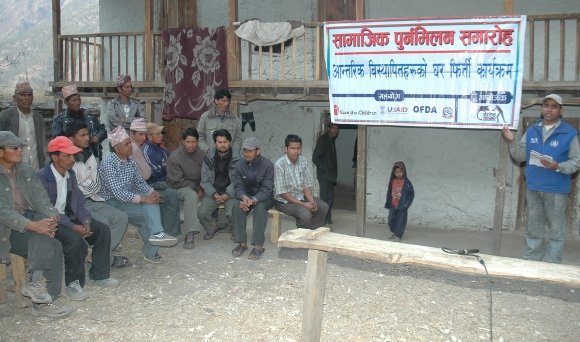 Current peacebuilding programmes in Nepal are not benefiting the people most affected by violence. The main problem is that the critical issue of inclusivity has not been properly addressed. Looking at the established ‘peace infrastructure’ and various peacebuilding activities, it’s easy to think a lot is being done to promote an inclusive peace. However, in reality very little is happening on the ground where it matters most.

Current peacebuilding programmes in Nepal have come in for widespread criticism for not benefiting the people most affected by violence.

Nepal was plagued by armed conflict between government forces and Maoist rebels for 10 years, from 1996 to 2006. Primarily an ideology-based armed conflict, the Maoists wanted to abolish the Monarchy which had ruled Nepal for over two centuries. However, the rebels ended their armed insurgency with the signing of a peace agreement with the government in November 2006.

The notion of conflict management and peacebuilding emerged in Nepal in 2001-2002 at the height of the violence. Prior to that, nothing substantive was being done in relation to peacebuilding. In 2006, as the conflict was ending, a broader range of peacebuilding initiatives were put in place in the country.

With regard to the government’s role in peacebuilding, no specific ‘peacebuilding’ programmes exist. However, various peacebuilding activities operate under the MOPR. For example, the Nepal Peace Trust Fund – a joint government-donor funding mechanism – currently allocates 39 per cent of its budget towards peacebuilding activities. The MOPR also has an Emergency Peace Support Project to provide support for individuals and communities affected by armed conflict. Local Peace Committees (LPC) also form part of the national peace infrastructure. The thinking behind LPCs was to make the peace implementation processes all-inclusive, with specific emphasis on local participation: individuals, civil society organisations (CSOs), local political leaders and various government agencies at district level. LPCs are also meant to find local solutions for the prevention and management of conflict at community and district levels. The government also formed a Peace Working Group with national and international participation. However, no mechanism involving both the government and the NGO sector has been established to date to deal with local and national peace initiatives.

Criticism of the role of NGOs and donors in the peacebuilding process in Nepal is widespread, including:

Very little happening where it matters most

The main problem with peacebuilding in Nepal is that the critical issue of inclusivity has not been properly addressed. Looking at the established ‘peace infrastructure’ and various peacebuilding activities, it’s easy to think a lot is being done to promote an inclusive peace. However, in reality very little is happening on the ground where it matters most.

The reasons for this can be summed up as follows:

The first thing Nepal requires now is an in-depth assessment of government, donor and NGO initiated peacebuilding practices in order to get a better understanding of just how inclusive the peacebuilding process is. Nothing of this sort exists in the country at present.

Secondly, Nepal requires multi-dimensional peacebuilding programmes that address the social, economic, and political needs of those people who form the most vulnerable group due to conflict. Such a multi-dimensional framework should also introduce conflict prevention activities. A good initiative in this regard is the donor communities’ efforts in formulating a Peace and Development Strategy Framework 2010-2015. However, whether it will promote greater inclusivity is questionable.

Lastly, there should be greater coordination between the government, donors and NGOs involved in peacebuilding initiatives in Nepal, which could lead to a more organized and disciplined peace intervention process. Importantly though, better coordination of peacebuilding initiatives in Nepal should begin at the very top of government so as to ensure a trickledown effect to local level.

Prakash Bhattarai is from Nepal and is currently enrolled as a PhD candidate in Peace and Conflict Studies at the University of Otago, New Zealand. His PhD research is focussed on assessing the dynamics of third-party coordination in armed conflicts and peace processes.

This article was published by Insight on Conflict and is available by clicking here.

If you are interested in writing for TransConflict, please do not hesitate to contact us by clicking here.