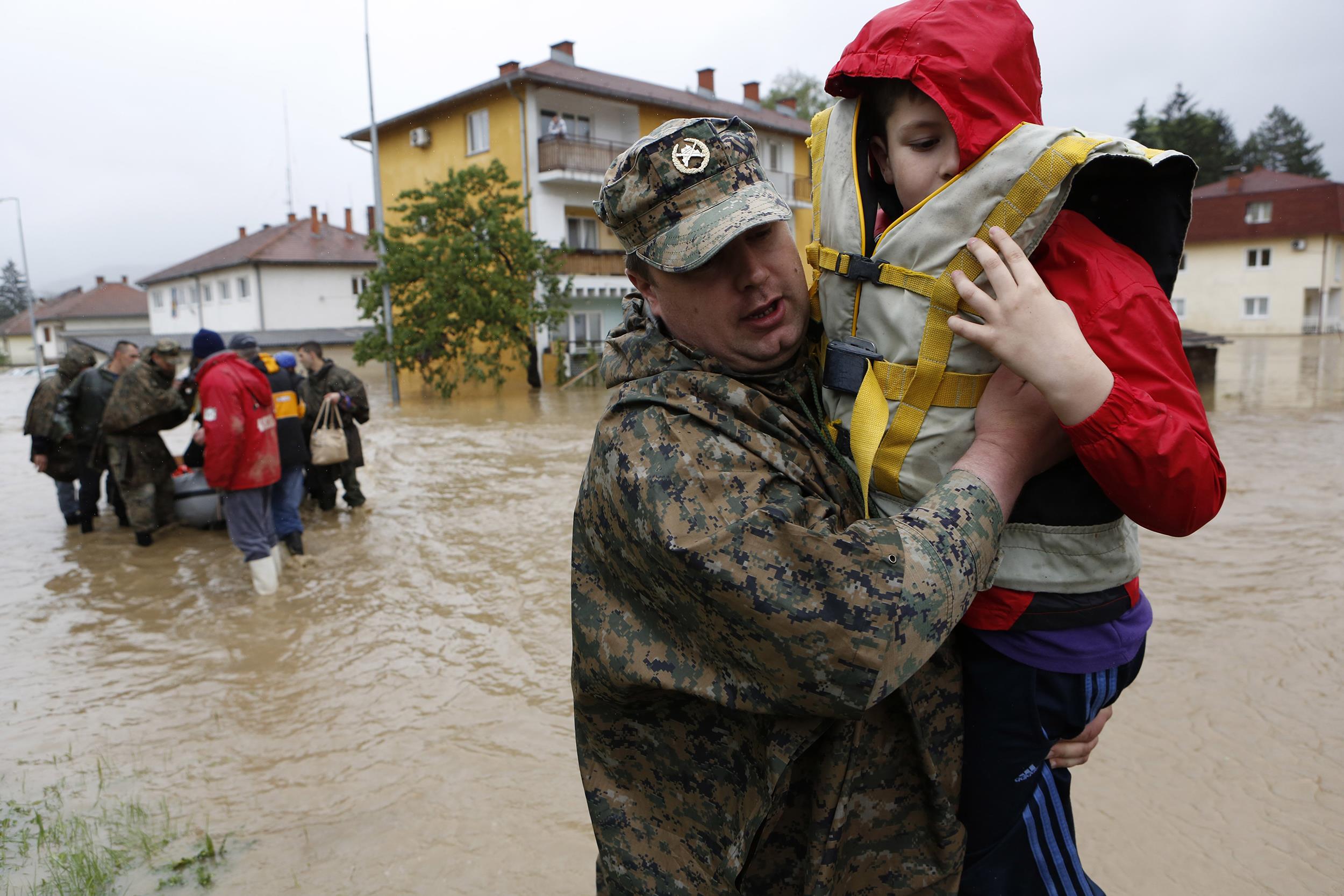 Tsunamis, earthquakes, floods, and other disasters often bring with them serious political and security consequences.  The earthquake in 1972 did much to enable the Somoza dictatorship in Nicaragua a few years later.  The tsunami of late 2004—and exemplary behavior of US marines and international aid workers—helped end (for now, at least) the insurgency in Aceh.  The 1963 earthquake in Skopje affected inter-communal relations as well as the economic prospects of one of Yugoslavia’s poorer republics.

The Balkan flooding and its aftermath are still in the stage where primary attention is where it should be—on relief of the pain and suffering of the victims.  Political authorities are issuing proper warnings that this disaster will have long-term consequences in Serbia, Bosnia and, to a lesser extent, Croatia.   International aid is coming in and more is promised.

At the same time, public expressions of anger (over slow aid delivery, but perhaps also in reaction to the enormity of the damage) are appearing in press reports. Some of this appears to reflect genuine dismay with loss and perceived unfair or inefficient relief efforts, but a few commentators show signs of attempting to use the immediate emergency to ride their hobby horses regarding longer-term developments in Bosnia and Serbia.  Whether the commentators’ targets are local politicians or international actors, the purpose seems to be to exploit the situation for the sake of reviving failed political movements or convincing properly skeptical foreign actors to re-impose a vice-regal regime that—despite the mythology engendered abroad—did at least as much harm as good in the first years after the war in Bosnia and NATO’s Kosovo bombing campaign.[1]

The political, economic, and social implications of this disaster will begin to take shape as immediate needs are being met—or are not.  The politician/patronage bosses who run Bosnia and Serbia would do well to remember the African phrase “The Big Man in a village should eat more than anyone else—but not too much more.”  Balkan communities are used to those in authority taking from the public trough for themselves, their families, and their network of supporters, but accusations that notables appropriate forthcoming international aid could spark anger far surpassing the overhyped “plenum” movement of recent months.  Those in power likely are going to face the challenge of combating rumor mills—whether sparked by local frustrations or provoked by calculating opponents—that will allege the relief and reconstruction process is being hijacked for the sake of special interests.  Given the impact of years of post-Yugoslav privations and political disappointments, people—especially in Bosnia—probably are ready to believe the worst about political authorities and bureaucrats.  Of course, at least some of these likely allegations might turn out to be true.

Serbian Prime Minister Vucic is off to a generally good start.  His public appearances are going relatively well (no matter some sniping from less than influential frustrated commentators), and he seems to recognize the need to propagate a narrative alleging cooperation between government and opposition to overcome the emergency.  The fact he has just taken the reins of government could work in his favor—there has not yet been time for complaints to build on other issues that might serve as a multiplier for those dissatisfied with how he handles disaster relief.  Still, the high economic toll engendered by the flooding surely will challenge a government that came to power knowing it already faced a difficult material situation.

Bosnian Serb strongman Dodik faces a much more difficult problem.  He already was having political trouble before the rain started.  His poor political choice of opposing Vucic’s rise will continue to make his life difficult—the two men need to cooperate to overcome the disaster, but Vucic will make sure he is not tarnished by any trouble Dodik gets himself into as relief efforts go forward.  Dodik already miscalculated by leaving Bosnia to consult with Vucic—the latter was still at home, did not suffer from that meeting, and did nothing to defend Dodik from his tactical error.

It is too early to know whether this disaster will increase the likelihood Dodik will lose his job in the October elections.  His political opponents will scrutinize everything he says and does to find ways to undermine whatever confidence his constituents still have in him.  Of course, their own behavior also will be relevant political fodder—it is not certain that SDS notables or other Opposition figures will resist the temptation to tap into the stream of aid for the sake of their personal and patronal interests.

Dodik’s counterpart in the Bosnjak-Croat Federation are so little respected that it is doubtful the emergency will drive their reputation any lower—unless the public comes to believe some of them are stealing aid money or all of them are engaged in arguments holding up the recovery effort.  The experience of this disaster might well enable renewed calls for a retooling of Dayton, but it is hard to see what combination of local politics and international hectoring will produce anything useful.

In this context, the activists and journalists who unsuccessfully attempted earlier this year to turn public protests into a movement against patronage and informal politics likely will use the disaster to have another go.  Recently a few of them employed breathless rhetoric in Sarajevo to demand that what passes for “government” resign.  Their small numbers and the Plenum movement’s apparent loss of steam led them to lose attention after a couple of days.

Whether they will have another shot now depends on how authorities in each entity handle relief efforts, the extent of the pain emanating from the flooding (no matter how notables and aid workers perform), and whether the activists this time can mobilize a cross-entity movement not susceptible to breaking down over local or parochial interests.  The trick will be for activists to keep the pressure on the authorities without themselves beginning to appear willing to sabotage relief efforts for the sake of their own ambitions.

…or Pressure from Below?

The guess here is that the powers that do not have much to fear from students, intellectuals, and professional activists, but do face the real danger that the damage wreaked by the natural disaster will become linked in the public mind with the many layers of failed politics and economic hardships that have beset Bosnia since Yugoslavia fell apart.  If relief efforts falter, Bosnia could face something like the phenomenon of multiple mini-protests that have become so common in China.  Dissatisfaction could spread from locality to locality, not initially becoming a leader-infested movement as much as a sum of angry parts combining to bring Bosnia to a stand-still.  New heroes eventually would emerge from such a development, but it cannot be known yet whether any of them would be able to enable growth of the sort of movement symbolized in Ukraine (for a while) by such figures as the boxer Vladimir Klitchko.  The danger is that it might produce the kinds of populists who have benefited from past natural or man-made disasters.  The relationship of Hitler’s rise to the great Depression is well-known; another was the emergence of Huey Long and his dynasty in the American state of Louisiana after the great flood of the Mississippi River in 1927.

We remain a long way from anything like this, of course, and the possibility exists that Bosnia’s current authorities will perform well during this emergency.  Nevertheless, even under the best of circumstances, the current emergency very well could lead to a turnover of political elites in some parts of Bosnia. Vucic, meanwhile, might find it useful to co-opt any currently unknown technocrats and talented local people who prove competent and savvy as Serbia cleans up.

The best news emerging from this disaster is the indication not only that people are cooperating across borders and communal lines, but that at least some consciously are nurturing this phenomenon in the hope it will become something permanent.  Signs that local authorities, patronage figures, and citizens are cooperating to pressure central and entity governments to reconstruct mutually beneficial infrastructure (that is to say, roads and other transportation means designed to enable better transport and communications among places inside the region, rather than between individual large cities and Western Europe) could indicate—finally—a determination to build the local markets essential to eventual economic growth.  It is essential that local planners resist efforts by EU experts to condemn the region once more to being little more than a marginal trading and commercial zone in a “Europe” economically and financially skewed in favor of the largest West European interests.  The flood will have done some good if it washes that neo-colonial idea away.

[1] For examples, see two op-eds posted on Balkan Insight on May 20–Milica Jovanović, “Serbia’s Leaders Have Generated a Tidal Wave of Panic,” and Edward P.Joseph and Srećko Latal, “Bosnia’s Other Calamity.”